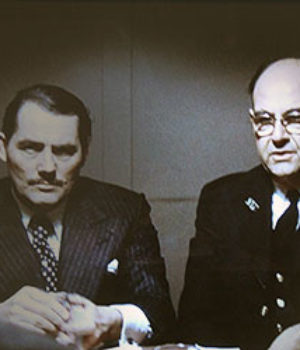 (January 7, 2014 – Toronto, Ontario) Toronto-born veteran actor Larry Mann has died in Los Angeles. The news of his passing was announced by his son, Richard Mann, who said the 92-year-old actor died due to age-related causes yesterday. Appearing almost always in a supporting role, Mann`s career spanned almost 4 decades and began in his hometown at the dawn of television in Canada.

It was 1953 when Mann made a debut of sorts appearing with the puppet Uncle Chichimus on the show Let`s See. Mann landed the spot thanks to another Toronto actor, his friend, Don Harron, but acting seemed to be in his blood. Larry Mann’s older brother, Paul Mann was not only one of the early and highly influential proponents of Method acting in the United States, but Mann created the Actor’s Workshop in 1953 where he taught classes to a large following including future actor Sidney Poitier. Larry Mann quickly made the leap from occasional performer to a member of the cast starting with a show titled Ad and Lib in 1954, he remained a frequent guest on Wayne and Shuster throughout the 1950s. From those early days of his career he is usually remembered for playing Cap’n Scuttlebutt on the Canadian version of the kids’ show Howdy Doody and he also hosted a late-night program called Midnight Zone, which debuted in October 1960.

But it was his work south of the border that led him to eventually buy a home in Los Angeles. He had landed a few roles in features beginning in 1963, including the animated Christmas favourite Rudolph the Red-Nosed Reindeer in which he provided the voice of Yukon Cornelius, but it was more substantial roles in films like The Singing Nun in 1966 and In The Heat of the Night in 1967 that brought him the attention he needed to build a career. For trivia buffs it is interesting to note that Mann had worked with the director of In The Heat of the Night, Norman Jewison, once before. That’s when Jewison was at the CBC and directed, among other things, that Uncle Chichimus show that marked Mann’s debut in show biz.

Mann is pictured above in the role of the train conductor who sets up the poker games in the 1973 classic The Sting sitting next to costar Robert Shaw. The scene was a pivotal moment in the film establishing the plot that drove the story forward. On TV, Mann made dozens of guest appearances on some of the most popular shows of the time including Gunsmoke, Bewitched, Hogan’s Heroes and Green Acres. His last recurring role was on the hit series Hill Street Blues where he played the role of Judge Lee Oberman in 15 episodes between 1983 and 1985. By then Mann was into his 60s and his career was beginning to slow down. His brother had died in 1985 when he was 70. Larry Mann made his last appearance in 1991 in the series Homefront and was essentially in full retirement by time he was 70.