(January 23, 2014 – Toronto, Ontario) The Academy of Canadian Cinema & Television has launched its online portal allowing fans of Canadian film and television to vote for their favorite actors and actresses. They can also get involved in activities during Canadian Screen Week, coming in March. 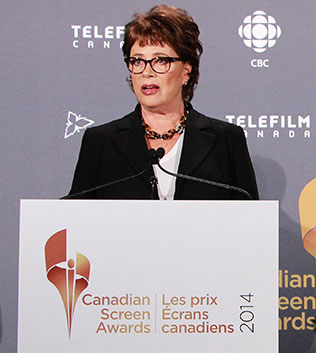 Screen Awards on all platforms and in person.”

FANZONE offers Canadians the opportunity to vote online for the Fan Choice Award. In short, you can help decide who will be Canada’s Screen Star in 2014! The winner will be announced on Sunday, March 9 at 8 pm (8:30 N.T).

You may also meet some of your TV favs in person at the live FANZONE event scheduled to take place at the Toronto Eaton Centre on Saturday March 8. The meet-and-greet photo session is a free event open to everyone. Exact time has yet to be confirmed, but details will be posted on the FANZONE website. Check regularly for an updated list of attending talent.

And, if all that buzz isn’t enough, you might attend the CBC Gala Broadcast on Sunday, March 9 at the Sony Centre for Performing Arts There are limited seats available for fans to be part of all the action.

You can check out all of the options (look for the panel just to the right of returning host Martin Short) on the special Academy FANZONE website.

The Academy of Canadian Cinema & Television is a national, non-profit, professional association dedicated to the promotion, recognition and celebration of exceptional achievements in Canadian film, television and digital media. Unifying industry professionals across Canada, the Academy is a vital force representing all screen-based industries.