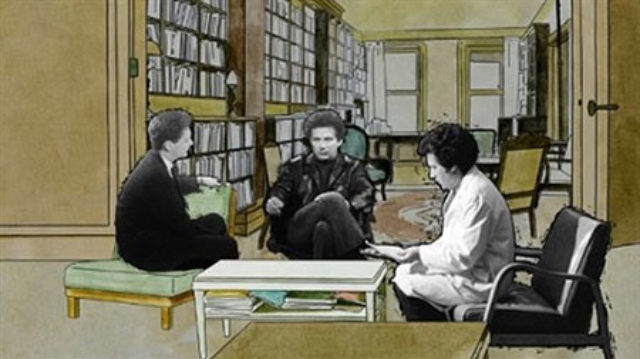 (April 26, 2014 – Toronto, Ontario) The Cannes International Film Festival has announced that Jutra, a short film directed and produced by Marie-Josée Saint-Pierre (MJSTP Films) in co-production with the NFB, will feature on the lineup of the 46th Directors’ Fortnight. An international showcase organized by the Film Directors’ Guild (Société des Réalisateurs de Films, SRF), the Directors’ Fortnight will take place from May 15–25, 2014.

Based on skillfully assembled archival footage and animated sequences, Jutra is an ingenious portrait of the great Quebec filmmaker Claude Jutra, director of Mon oncle Antoine, Kamouraska, Surfacing and many others. Pursuing the process she began in 2006 with McLaren’s Negatives, Saint-Pierre has created a new animated documentary in which she encapsulates the career of a filmmaking legend with finesse and originality.

Using the arts of editing and animation, the renowned Québec director is seen in dialogue with himself at various stages of his career. In effect, and in fact, the narrator of his own biography. Excerpts from Jutra family films, interviews, clips from some of his own films are cut together in seamless fashion giving those who have a chance to see this short film a fuller understanding of the genius of a man whose life was devoted to creativity and who died far too young.

Saint-Pierre graduated from Montreal’s Concordia University and founded MJSTP Films, an independent production company, in 2004. Over the years, she developed a cohesive body of work that sits at the crossroads of animation and documentary. Many of her films, notably Post-Partum, Passages, McLaren’s Negatives and Le projet Sapporo, have won awards. Jutra marks her first co-production with the NFB.

Canadian filmmakers have often been invited to screen at the highly prestigious Directors’ Fortnight. Just a few of the names that come to mind include Clay Borris, Manon Briand, Jeremy Podeswa, Robert Lepage, Atom Egoyan, Allan King and Guylaine Dionne.

With its roots in a protest movement in 1968 that included such luminaries as Jean-Luc Godard and Francois Truffaut, a group of directors thought the Cannes festival should suspend operations as a sign of support for the student demonstrations that had rocked France that year. One year later, the movement became formalized as a sideline to the main Cannes festival but with an emphasis on being a festival “by filmmakers for filmmakers.”