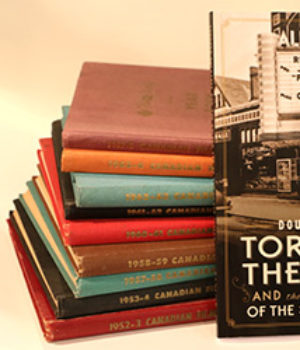 (September 22, 2014 – Toronto, Ontario) The trouble with being fascinated about any subject is the amount of detail involved in anything of real interest. Take Canadian movies, for example. Among the items in our ever-growing Northernstars Collection is an incomplete set of yearbooks compiled from information in the publication Film Weekly. In the 1952-53 edition, for example, contents range from a multi-page article about the Ouimet theatres in Québec, to full-page ads for Famous Players or Simplex Projectors to industry listings for production companies like Frontier Film on Sherbrooke Street in Montreal or Capital Film Productions on the Queensway in Toronto, which in a full page ad lists Johnny Wayne and Frank Shutter as Vice-Presidents of the company. Each yearbook also lists, with address, every cinema in Canada by province and city. In the 1952-53 edition, there were 126 theatres in Toronto, Ontario. Which brings me to Doug Taylor`s marvelous book.

Toronto Theatres and The Golden Age of the Silver Screen, published by The History Press, is a must have addition to your library no matter if your interest in film ranges from casual filmgoer to seasoned filmmaker. The book, in its 160 pages, chronicles the rise of the film industry from its very first venue to the most recent developments 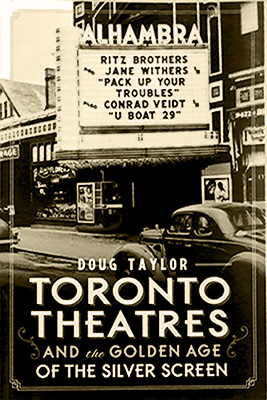 including the change of operators from AMC to Complex at Yonge Dundas Square to the opening of the city`s newest theatres, those located within the TIFF Bell Light box.

Back in 1890 there was a wonderful spot in downtown Toronto known as Robertson`s Muse at the corner of Yon ge and Adelaide Street East. It offered a wide variety of exhibits including caged wild animals on its rooftop. Six years later, on the precise date of August 31, 1896, the Muse began showing “moving pictures,” and the movie exhibition business in Toronto was born. Using Edison`s Vita graph projector, chances are one of the films shown at the Muse was a clip of Canadian-born actress May Irwin, which was shot by an Edison crew in New York. Movie theatres as we would recognize them didn’t begin to appear until the 1910s.

Taylor`s book is wonderfully arranged. In addition to the chronological order of the book, no Toronto neighbourhood is forgotten. Filled with photos including some wonderful interior shots of movie palaces like Shea`s Hippodrome or the Tivoli or The Pantages, Toronto Theatres captures that Golden Age of luxury and glamour.

One of the most glamorous of the movie palaces was the Loews’ Uptown. It contained 2800 seats when it opened and Marcus Lowe himself came to Toronto in 1920 to attend the opening. While a Vice-President at Toronto`s CFRB radio, I came across the original program for a gala live performance that would be broadcast from the stage of the Lowe`s Uptown as the station signed-on for the very first time in 1927. When the station was celebrating its 60th anniversary in 1987, I wanted to restage that opening event complete with live performances from so many of the musical artists CFRB had helped along the way. But I was voted down. We ended up doing a simple broadcast from the station`s first studios, now a restaurant on Jarvis Street. No glamour or gala there.

This is Doug Taylor`s seventh book about Toronto. He has researched, studied and taught the history of Toronto for several decades. Now retired, Toronto Theatres and The Golden Age of the Silver Screen shows the care that has gone into pulling this excellent resource together. The information is not so detailed as to be overpowering, yet there is enough to make the book both a wonderful journey down memory lane and an easy read. Filled with names most people would recognize, from Mary Pickford to Sonja Henie to Garth Drabinsky, Toronto Theatres and The Golden Age of the Silver Screen can be purchased online from a number of sources. We first noticed the book on the Toronto Star`s online store. With the holidays and gift-giving season just beginning, this would make a wonderful gift for cinephiles or history buffs no matter where they may live.