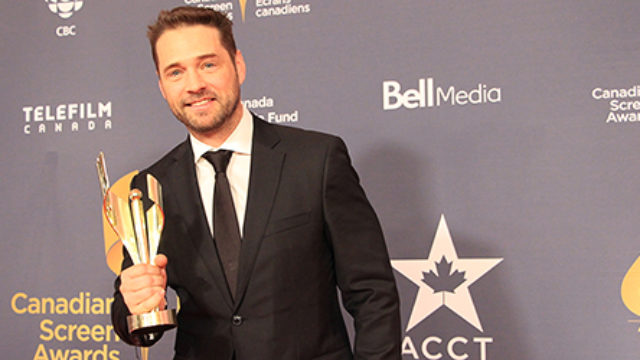 (January 9, 2015 – Toronto, ON) ACTRA (Alliance of Canadian Cinema, television and Radio Artists) will honour Canadian star Jason Priestley with the ACTRA National Award of Excellence on Saturday, January 31, 2015 in recognition of his contribution to Canada’s film and television industry. ACTRA National President Ferne Downey will present the award at a special evening reception at the Beverly Hilton Hotel in Los Angeles.

Born in Vancouver, Priestley worked in Canada as a child actor with guest appearances on 21 Jump Street and Quantum Leap. Now a seasoned actor, Jason Priestley is pictured above with his Canadian Screen Award for Best Comedy Actor for his role as Fitz on Call Me Fitz. His numerous acting credits include Beverly Hills 90210, How I Met Your Mother, Without a Trace and Psych.

In addition to acting Priestley has become an accomplished director. His feature film Cas & Dylan is a charming road movie that pairs rising star Tatiana Maslany with verteran actor Richard Dreyfuss. Priestley also directed the documentary Barenaked in America and episodes of various television series including The Secret Life of the American Teenager, Haven, Rookie Blue and Saving Hope.

ACTRA is the national union of professional performers working in the English-language recorded media and represents the interests of 22,000 members across Canada.