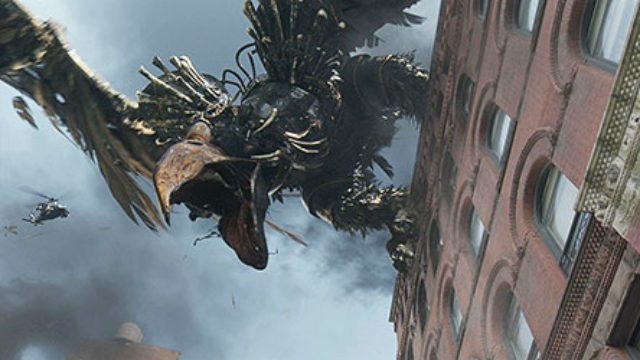 (February 5, 2015 – Montréal, QC) Montreal-based Rodeo FX has something to…ah, crow about. We couldn’t resist. The nine-year-old visual effects house that also has offices in Québec City and Los Angeles was given a Visual Effects Society (VES) Award for its work on Birdman, which has seven Oscar® nominations including Best Picture. The VES award is for Outstanding Supporting Visual Effects in a Photoreal/Live Action Feature Motion Picture, and is one of the preeminent awards in this industry.

Rodeo FX continues its recent run of industry honors, including the Emmy and HPA Awards the facility won in 2014 for the visual effects it created for the TV series Game of Thrones. The VES Award was handed out last night at a black tie event in Beverly Hills to Ara Khanikian, the VFX supervisor, and Ivy Agregan and Isabelle Langlois, the VFX producers on Birdman. The VES Awards recognize outstanding VFX work

in film, TV, commercials, and gaming and the VFX producers, supervisors, and artists who create that work.

“This team of visionary filmmakers and artists has invented a new way of making movies,” said Langlois, VFX producer at Rodeo FX. “Audiences don’t realize how much work went into Birdman, which makes this such an extraordinary technical achievement. Ara and I are thrilled to share this award with the amazing team at Rodeo FX who worked so hard on Birdman.”

In addition to the obvious VFX in the movie, Rodeo FX was tasked with seamlessly stitching together all the individual scenes to create the illusion that the entire film was shot in one continuous take. “It is so rewarding to create seamless visual effects that serve the story,” said Khanikian,VFX supervisor at Rodeo FX. “We contribute to the magic of the movie, supporting an amazing story that will carry away the audience with its intense emotional currents.”

“Birdman is a real masterpiece, not only because of the storyline and performances, but because of the technical accomplishments of incredible cinematography, editing, and imperceptible visual effects,” said Sébastien Moreau, president of Rodeo FX. “It was an honor to collaborate with these passionate filmmakers on this extraordinary movie.”

Rodeo FX was founded in 2006 by Moreau, a former Industrial Light & Magic (ILM) artist, Rodeo FX has grown to more than 200 accomplished artists and professionals with studios in Montreal, Quebec City, and Los Angeles. The company has delivered visual effects for more than 70 feature films, including Unbroken, Birdman, Lucy, Edge of Tomorrow, 22 Jump Street, The Hunger Games: Catching Fire, Pacific Rim, and Now You See Me. The Rodeo FX advertising division created the opening sequence for this year’s NFL Super Bowl in addition to NBC’s Sunday Night Football.

Canadian Film of the Day: September 10