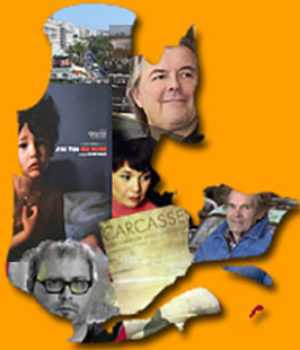 Inside Québec – June 2009
by Maurie Alioff

Xavier Takes Cannes
It’s not easy to grab the spotlight at the Cannes Film Festival. In its Official Competition and its sidebars, Cannes previews the latest from the international moviemaking elite, catapults new talent to the art film A-list, and inevitably sets off a frenzy of media attention with deliberately outrageous movies.Among the most widely covered pictures at this year’s event, venerated Austrian director Michael Haneke’s The White Ribbon took the Official Competition’s Palme d’Or with its vision of a repressive German village on the cusp of Nazism. A contrastingly pop approach to the Third Reich, and the fest’s hottest ticket, Quentin Tarantino’s Inglourious Basterds benefited from a reportedly galvanizing performance by best actor recipient, Christoph Waltz. And perpetual bad boy Lars von Trier loomed largest with Antichrist, provoking fear and loathing with the film’s twisted, ultra-violent narrative about a grieving young mother who goes satanic, and then basking in the afterglow of a best actress award for Charlotte Gainsbourg.Enter a 20-year-old actor and filmmaker from Montreal, world premiering his directorial debut in the prestigious Quinzaine des réalisateurs. Without a track record like Tarantino’s, or a movie depicting genital mutilation like von Trier’s, Xavier Dolan managed to be stage centre at the world’s most renowned film 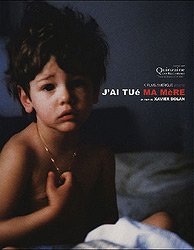 festival. Dolan was buttressed by his implacable faith in the value of his work, the excitement the film generated back home, his movie star looks, and the most in-your-face title for a Canadian film since Young People Fucking.J’ai tué ma mère (I Killed My Mother) is Dolan’s quasi-autobiographical comic portrait of a tumultuous love-hate relationship between a precocious, hyper-articulate teen (Dolan himself) and his petite-bourgeoisie mother (Anne Dorval). I killed My Mother cranked up so much expectation in Quebec before anyone saw it, its writer-director-producer seemed to be a shoe-in for the Camera d’or, the Cannes prize that honours first films.Mother didn’t win the Camera d’or, but it did pick up three other prizes, including the Art Cinema Award granted by an international jury of indie theatre programmers obviously convinced that audiences will go for the film. On top of that, interviewers pursued Dolan, publications from Variety to the Huffington Post bestowed favourable reviews on his work, and the French newspaper Le Figaro set up an unusual encounter between the young cineaste and one of the world’s most eminent filmmakers, Alain Resnais – recipient of Cannes 2009’s Lifetime Achievement award.In the aftermath of Dolan’s success, Quebeckers like producer Roger Frappier were comparing him to multi-talented Orson Welles, who created a masterpiece before he was 25. Dolan started writing Mother at age 17, then produced, directed, starred in, and even art-directed his picture while still in his teens. In fact, until Quebec funding agency SODEC helped out with postproduction, Dolan financed I killed My Mother with earnings from an acting career that began when he was a four-year-old shooting commercials for a chain of pharmacies.I killed My Mother is no seismic upheaval in moviemaking language like Citizen Kane. But it is an assured first film with a completely believable, dramatic tension at its core. Dolan’s movie opens with a montage of closeups depicting his character Hubert’s disgust for his mother, Chantale. He can’t bear her kitschy taste in home furnishings, her badly co-ordinated outfits, and the 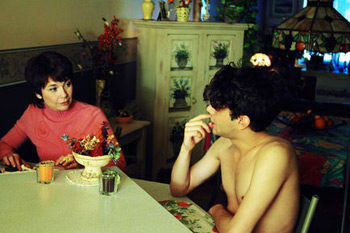 way she leaves specks of cheese on her chin when she eats a bagel. Later in the film, the fact that she never heard of Jackson Pollock really bugs him.Hubert rants and raves, cutting up his mother with his razor sharp verbal skills. Hubert is “special” as Chantale, a soft-spoken woman with a vague resemblance to 1960’s era Shirley Maclaine, told him when he was younger. But now she is wary of her brilliant brat and often intimidated by his tantrums, which can abruptly morph into inflamed professions of love. As the story develops, Chantale discovers what the audience already knows: her son is gay. The plot turn brings on a new level of estrangement between mother and son, complicating the oedipal undercurrents.I killed My Mother is a low budget film with minimalist but alluring production values. It swings between rapid-fire closeup montages, occasional dream sequences, and many two-shot duets – between Hubert and Chantale, Hubert and his lover Antonin Rimbaud (François Arnaud), Hubert and a teacher (Suzanne Clément), who appreciates his “fragile poetry from another era,” and empathizes with his troubles. Whatever the movie’s strengths and limitations, Xavier Dolan has pulled off something rare in Canadian filmmaking.  Much of the movie’s appeal derives from Dolan the actor’s glamorous, often shirtless physical presence. He looks like a hybrid of young Johnny Depp and doomed 1950’s teenstar, Sal Mineo.It’s no exaggeration to say that I killed My Mother wouldn’t be the same film without its star’s abundant black hair, often worn in a wavy tumble over his left eye. Looking at the topless, bushy-haired baby in the movie’s poster, a friend of mine observed that when Dolan was a child, his hair probably weighed more than he did.

Garden of Debris
Along with I Killed My Mother, two other Quebec films screened in the Quinzaine des réalisateurs: Denis Villeneuve’s Polytechnique, a restrained portrayal of the 1989 shooting massacre of female engineering students (see March Inside Quebec) and Denis Côté’s new film, Carcasses. A onetime movie critic, Côté shoots deadpan existential dramas that draw praise on the international film circuit.In Carcasses, Côté meticulously tracks the daily rituals of a real person in a somewhat fictionalized situation. Marginal to the max, Jean-Paul Colmor lives on a patch of rural Quebec crammed with every kind of rusting scrap imaginable. Even Colmor’s home is packed with junk. It’s stacked on shelves, cluttering the floor, 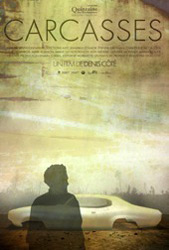 spilling over onto his kitchen table as he consumes his meals. In a picture almost free of dialogue, Colmor says at one point, “I have 4000 old cars in my heart.”Throughout the movie, Colmor is Mr. Busy. He unpacks debris, piles it up, throws things into the back of crumbling hatchbacks, and transports them from one spot to another. He hammers, screws and clanks as birds sing, crickets chirp, and Mahler occasionally swells up on the soundtrack. For some reason, his idea of chilling out is trying to learn Spanish from an old vinyl record.At about the midpoint, a group of intellectually challenged kids mysteriously show up. They dig holes, play with a rifle, and make out with each other. When Jean-Paul approaches them with an ax, you get the impression they might be a threat. But in Carcasses, you’re never really sure what anybody is trying to accomplish.Jean-Paul’s world is sculptural, textural, a garden of debris tended by an obsessive. Is he a madman? An avant-garde artist who merges with his own creations? At one point, a photographer appears and takes shots of the photogenic clutter, reminding us that there’s a random aesthetic worth noting here. Following the movie’s Cannes press screening, Côté said, “It was a silent reception, maybe cold. I don’t know what went on in the viewers’ heads. I find that exciting.”

L’Afaire Chaput
Apart from the Quinzaine entries, Cannes screened Quebec productions A No-Hit, No-Run Summer (August 2008 Inside Quebec) and It’s Not Me, I Swear! (October 2008 Inside Quebec) in the festival’s Écran Juniors slate of movies about young people.While at the festival, Culture Minister Christine St-Pierre expressed her satisfaction with Quebec’s 2009 showing. On the road and at home, St-Pierre has been championing government support of culture, recommending that Stephen Harper’s government adapt the same attitude. To honour I Killed My Mother, she set up a screening of the film for Quebec’s National Assembly, which passed a motion praising Xavier Dolan and his crew. The Harper government would probably react to a movie entitled I Killed My 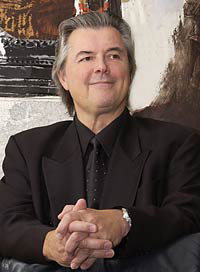 Mother by cutting Telefilm Canada’s budget, even though Telefilm didn’t put a cent into the movie. Sadly, warm feelings cooled when Quebec’s auditor-general, Renaud Lachance, accused the man who runs the highly respected funding agency SODEC of enjoying an unnecessarily “sumptuous” lifestyle on the public dime. While Jean Guy Chaput was still on the Croisette, working the festival with his team, Lachance recited a litany of offences: Chaput’s $1300 a night Cannes suite, $80,000 in unreceipted expenses for last fall’s Cinéma du Québec event in Paris, the agency spending $22,750 between April 2006 and December 2008 for 181 meals, and so on.At a press conference, Chaput tried to erect a line of defense, insisting that Lachance’s complaints were unjustified. For instance, an agency chief needs a suite for business meetings, and the $80,000 paid for events on the ultra-expensive Champs-Elysées. Media reports claimed that in the past, Chaput clashed with certain individuals who were out to settle accounts with him. Some insiders argued that agency bigwigs often book the best, and in any case, there are no clear parameters set for them.However, for Christine St-Pierre, Chaput has “no more moral authority to run SODEC,” and apparently, Premier Jean Charest has been fuming over the embarrassing incident. At the end of May, the SODEC Board of Directors unanimously recommended that the beleaguered President vacate his SODEC offices before his current mandate ends in October.

Maurie Alioff is a film journalist, critic, screenwriter and media columnist. He has written for radio and television and teaches screenwriting at Montreal’s Vanier College. A former editor for Cinema Canada and Take One, as well as other magazines, his articles have appeared in various publications including The Montreal Mirror and The New York Times.