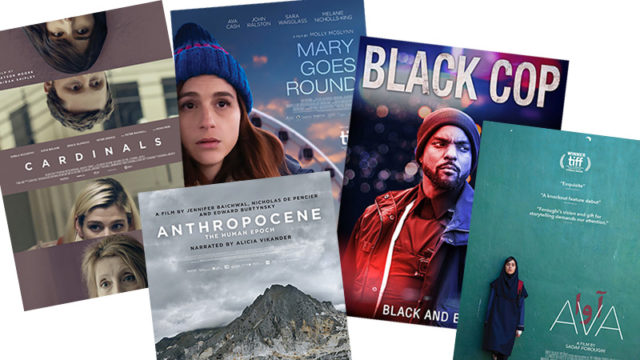 My 13 Favourite Canadian Films for 2018
by Jim Slotek

(January 1, 2019 – Toronto, ON) Hollywood blockbusters don’t need my help. But movies are the poorest cousin of Canadian entertainment, operating without even the thin safety net of Cancon regulations that support music and television.

Simply put, if your local multiplex doesn’t want to program Canadian films, there’s not a thing anybody can do about it. And yet, year after year, resourceful filmmakers figure out how to take a pittance of a budget and make movies that move us.

On January 8 at the Four Seasons Hotel, the Toronto Film Critics Association – of which I’m a member – will put the spotlight on three of them, with one taking away the Rogers Best Canadian film award, and a prize of $100,000 (enough for some Canucks to make 10 features). So that trio of films is where I’ll start my end-of-year Maple Movie list, adding some of my 2018 favourites that didn’t make the short list.

ANTHROPOCENE: THE HUMAN EPOCH – Photographer Edward Burtynski’s fascination with landscapes marked by human intervention, has given us three films – Manufactured Landscapes, Watermark and this magnum opus co-directed by Burtynski, Jennifer Baichwal and Nicholas de Pencier. It’s framed on the notion that we’ve moved from the Holocene Epoch to the Anthropocene, in which the planet is marked mainly by human activity. There is perverse visual beauty in the horror of Africa’s largest landfill, Russia’s most polluted city and calcified coral reefs. An astonishing doc in scope.

AVA – Iranian-Canadian filmmaker Sadaf Foroughi gives us a unique look at the world of teenage girls in Tehran, with the universal obsessions of music, boys and gossip. Unfortunately, the school is a microcosm of the state, with mere rumours of misbehaviour inspiring crackdowns, expulsions and, for 16-year-old Ava (Mahour Jabbari) a humiliating medical exam. An achingly sensitive look at a simultaneously different and recognizable youth culture.

MAISON DU BONHEUR – Sofia Bohdanowicz’s profile of a 77 year old astrologer Juliane Sellam, who’s been cooking up a storm in her Paris apartment for a half-century has been described more as a holiday than a documentary. Sellam’s recollections are all over the map, painting a mental picture of an insouciant life, the importance of makeup and a late husband who showered her in shoes. A sweet and light profile of a unique woman.

And, un-nominated they may be by my critic colleagues, the following films are my other Canadian faves this year.

CARDINALS – A standout film from the 2017 Toronto International Film Festival, it says a lot about the state of Canadian film distribution that this tour de force by Sheila McCarthy didn’t make it to theatres until the week before the 2018 festival. McCarthy plays a woman just released from prison for drunken driving causing death and is still closed-lipped with her husband and daughters about what exactly happened. Meanwhile she’s being practically stalked by the victim’s vengeful son (Noah Reid).

THE GO-GETTERS – Owen (Aaron Abrams) meets a drug-addicted hooker named Lacie (Tommie-Amber Pirie) on a Toronto curb where he’s smoking half-finished cigarettes he finds on the ground. A scabrously funny, deliberately offensive sort-of-love-story between two people who’ve hit rock bottom and are willing to exploit whoever it takes (including each other) to pull themselves up off the ground.

BLACK COP – Cory Bowles – a.k.a. Cory on the Trailer Park Boys – shows off dramatic chops in his feature directorial debut about a cop (Ronnie Rowe) whose close-up view of how his people are treated (and a personal “profiling” experience by fellow cops) causes him to snap and start profiling whites. A play within a movie, Rowe delivers rage-filled monologues that provides profound context for the action onscreen.

BOOST– Hakeem (Nabil Rajo) and A-Mac (Jahmil French) are two friends, drop-outs and wannabe gangstas in Montreal’s Eritrean-Canadian crime scene. But the realities of that scene, and Hakeem’s grooming as a crime heir, come between their friendship. Director Darren Curtis has a sure hand with crime film must-haves – tension, action, betrayal and fast cars. And he paints a poignantly believable picture of joined-at-the-hip best friends on a tragic course.

SHARKWATER EXTINCTION – That Rob Stewart drowned while making this follow-up to his groundbreaking ocean activism film Sharkwater is a sad distraction from the anger that Stewart meant to provoke. More of a detective than ever, he follows the money in the shark trade to discover undisclosed shark ingredients in everything from makeup to pet food. There are confrontations with poachers and politicians, a successful legal fight against destructive “drift nets” off Los Angeles, and incredible undersea footage. A fitting epitaph for an eco-warrior.

CLARA – An off-beat romance between a number-crunching astronomer and a flighty, New Agey young woman that manages to teach you quite a bit about how exo-planets are discovered. The second feature by 23-year-old Akash Sherman stars Patrick J. Adams as Isaac, a depressed, tragedy stricken academic whose quest for a research assistant turns up Clara (Troian Bellisario), a young woman with no practical science experience, but who turns out to be an insightful and quick study. An insightful film about the duality of the mind and heart.

PROSECUTING EVIL: THE EXTRAORDINARY WORLD OF BEN FERENCZ – The last living Nuremberg prosecutor is a 99-year-old Floridian who still swims every day and who, while in his 20s, brought convictions against 22 Nazi SS officers who, between them, were responsible for the deaths of a million people. Barry Avrich, usually a chronicler of showbiz giants, takes a no-frills-needed approach and lets his subject do the talking – both about the Holocaust and his life’s work on the International Criminal Court.

MARY GOES ROUND – Another impressive feature debut by a young Canadian filmmaker. Molly McGlynn shows a sure hand with this story about a substance-abuse counsellor named Mary (Aya Cash), who ironically is herself an alcoholic and whose life falls apart after a drunk driving accident. What follows is a trip to Niagara Falls to awkwardly reunite with estranged family members. With so much room for lugubrious sentiment, McGlynn manages to make it all ring true episodically.

KNUCKLEBALL – Calgary director Michael Peterson created a “Home Alone meets The Shining” mash-up with this thriller about a young boy named Henry (Luca Villacis) who reluctantly agrees to visit his curmudgeonly hermit of a granddad (Michael Ironside). They bond, but when the old man dies in his sleep, Henry is left with only his wits to defend himself from the lunatic at the farm next door (Munro Chambers).

BAO – Canadian in that its director, Domee Shi, was raised in Toronto, this alternately heartwarming and heartbreaking Pixar short screened before The Incredibles 2 at theatres worldwide. It’s the story of a traditional Chinese mom making dumplings and buns, one of which comes to life and becomes her “child.” To say anything more would ruin the film’s pleasures, but prodigal daughter Shi brought plenty of heart to this wonderful and slightly dark fable.