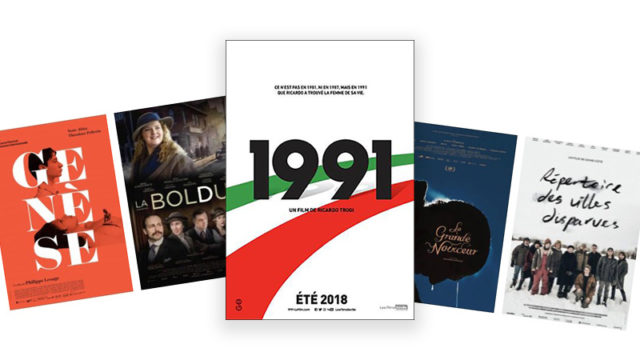 (May 31, 2019 – Toronto, ON) I was hoping to be in Montréal this weekend to cover the annual Gala Québec Cinéma on Sunday. As someone named Allen Saunders once said (and John Lennon repeated) “Life is what happens to you while you’re busy making other plans.”

I don’t know for sure, no one does at this point, but I’m fairly certain Ricardo Trogi’s film 1991 is going to do well. It was last year’s winner at the box office pulling in a respectable 3-million dollars plus. 1991 is the third film in Trogi’s autobiographical trilogy, which began with films titled 1981 and 1987. In 1991, the lead character of Ricardo (played by Jean-Carl Boucher) is now 21 years old. When the love of his life insists that he accompany her to attend summer school in Italy, the young man cannot help but accept the invitation. Filled with hope, Ricardo leaves Québec in pursuit of love.

There are two other categories open to 1991 and that’s the “Prix du Public,” which is a “people’s choice” award. 1991 is up against La Bolduc, Denys Arcand’s La Chute de L’empire Américain, the animated feature La course des Tuques (released in English as RaceTime!) and La Disparition des lucioles.

The last category (other than shorts and documentaries) is one that looks for the Québec film that had the best results outside of the province. 1991 is not nominated here. The five films that are include Arcand’s La Chute de L’empire Américain, La course des Tuques, La Disparition des lucioles, Kim Nguyen’s Eye on Juliet (which is my pick) and Cielo from Alison McAlpine.

Quick count: That’s 16 nominations across 20 categories for 1991. It did not get a nomination for Best Casting nor for Best Actress in a Leading Role. The other remaining category is for Best Discovery of the year, usually reserved for actors making their feature debut appearances.