Home News Archive Inside Québec – May 2008 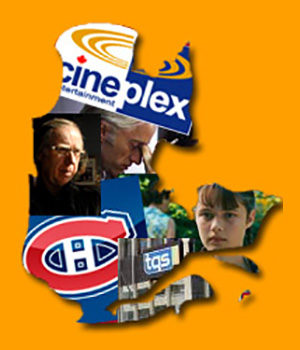 Inside Québec – May 2008
by Maurie Alioff

Everyone Used to be Happy

Set in 1966, Léa Pool’s Maman est chez le coiffeur opens light and breezy as summer begins for teenage Élise (Marianne Fortier) and her kid brothers. The veteran auteur’s new picture darkens when their journalist mother (Céline Bonnier) announces that if she doesn’t check out of their idyllic country home and take a posting in London, she will die. The impact on the family is immediate. Brother Coco (Élie Dupuis) becomes even more obsessively focused on the go-kart he’s assembling in the garage. More disturbingly, Benoit (Hugo St-Onge-Paquin), who in an early scene shows mom his drawing of her as a powerful queen, smashes toys and tailspins into self-destructive withdrawal. French actor Laurent Lucas (With a Friend Like Harry) plays the father as a fussy medical professional, whose initial reaction to his wife’s abandonment is childish regression. 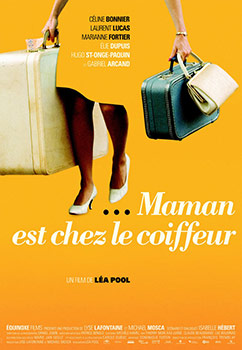 Pool and screenwriter Isabelle Hébert work up real empathy, not just for the idiosyncratic central characters, but also for their friends and neighbours, most of whom suffer their own wounds. Other people’s gardens are not any greener, dad tells his kids. For Élise, at an age when she’s delighting in her first sexual rituals, the charmed fairy tale she once lived fractures into a world of troubled souls. One of them is M’sieu Mouche (Gabriel Arcand), a man-child who crafts beautiful fishing lures, and may be dangerous to children.The movie’s fairy-tale atmosphere, complete with its own comical Wicked Witch of the East, is heightened by exquisite visuals of Quebec’s Richelieu Valley. The film’s Switzerlandian look alludes to The Sound of Music, and one of Élise’s friends dresses like he’s in it.  With the exception of judiciously chosen American cars and a couple of pop songs – like Quentin Tarantino in Kill Bill, Pool deploys “Bang Bang (My Baby Shot Me Down)” – the Swiss-born director’s world seems closer to the countryside near Berne than a North American locale.

What the Hell is Going On?

As the most vicious winter in 30 years finally loosened its grip, three stormy dramas became the focus of media attention and industry chatter. A respected filmmaker engaged in an exhausting battle with a prominent producer; an indie distributor collided with exhibition giant Cineplex Entertainment; and the new owners of Télévision Quatre-Saisons pitted themselves against everyone from union members to politicians in all three major political parties. Prolific feature film and TV director Giles Walker first hooked up with producer Claudio Luca (The Boys of St. Vincent, The Last Chapter) to shoot Il Duce Canadese (2004), a mini-series about the internment of Italian-Canadians during World War II. The smooth collaboration prompted Luca to hire Walker for another show: an ambitious 12 hour look at one of Quebec’s most revered and complicated figures, René Lévesque.In an interview Walker told me he was first surprised, and then distressed that Luca “seemed to be increasingly unhappy” throughout the demanding, but gratifying shoot. “What the hell is going on here?” he asked staff producers. Eventually, the director submitted his cut, assuming that Luca would follow the showrunner’s routine of preserving what he liked and re-assembling what he didn’t. Walker also assumed that the remainder of his fees, about $126 000, would be paid, “according to my contract.” Instead, a letter from Ciné Télé Action 2, the company set up to produce the series, informed Walker that the agreement had been “nullified.”During arbitration, Luca argued that he had to save a substandard show in postproduction. Walker says that he assembled DVDs showing that “90% of the series was derived directly from the work that (editor) Jean Beaudoin and I had done.”  The arbitrator rejected Luca’s arguments, as well as a countersuit for $270 000 that would have devastated Walker financially if he had lost.At this point, there have been three judgments, including from Quebec’s Superior Court, against Luca. Walker says he’s proud of his work, and points out that unlike his well received take on the independentiste icon, which won lead actor Emmanuel Bilodeau a best performance Gémeaux, Luca’s recently aired follow-up got slammed by the French media and the legendary politician’s colleagues.“Now I see what it is that the producer wanted.” says Walker. “It’s a form of hyper-drama, which I wouldn’t do.” The quarrel cranked up into its own hyper-drama when Walker and Quebec District Council of the Directors Guild of Canada (QDC) had bailiffs seize the film negative, digital master and sound material of the first series. Intending a “judicial auction” of these materials, as well as the copyright, the QDC also formally complained about Luca to the Association des producteurs de films et de télévision du Québec (APFTQ). At publication time, the producer has not backed off from his position that he incurred extra expenses to finish the series, and that Walker cost him a fortune in legal fees. 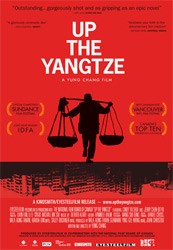 In early April, Cineplex Entertainment aborted its planned May programming of a hit French comedy on screens in Montreal and Quebec City. In addition to yanking Un baiser s’il vous plaît, Cineplex also pulled the French version of the doc, Up the Yangtze, (which recently picked up a rave review in the NY Times) from a Montreal cinema.Cineplex was punishing Up the Yangtze’s producers and K-Films Amérique, Quebec distributor of Un baiser s’il vous plaît, because they had offered the films to a regional exhibition network called Réseau Plus. A non-profit, government-subsidized amalgamation of lo-fi screening venues, Réseau Plus plays mainly arthouse pictures in colleges and community centres located in various regions, some of them so remote, the last picture show palace faded out long ago. The operation commands a tiny share of the Quebec market. For Cineplex, and for Quebec’s Association des Propriétaires de Cinémas et Cinéparcs (APCCQ), commercial exhibitors have inalienable first run rights to the movies they screen. Rules are rules. What Cineplex failed to grasp is Quebec’s long history of not-for-profit Ciné-Clubs making film art available to people who would otherwise be deprived of it. Renowned moviemakers committed to their vocation after seeing work by Fellini, Godard, or Samuel Fuller in their local clubs.Reacting quickly, K-Films Amérique’s respected founder, Louis Dussault, lacerated Cineplex in the newspapers. Numerous industry players weighed in with their views, debating arcane fine points regarding commercial and non-commercial exhibition. In the normally acrimonious National Assembly, both the government and its opposition agreed that Réseau Plus is a jewel in Quebec’s cultural crown.The most passionate interventions came from eminent producer Rock Demers and longtime reparatory cinema operator, Roland Smith. Now running Montreal’s beloved Cinéma du Parc, Smith called theatre owners “nothing more than sellers of popcorn and nachos,” insisting that like all businessmen, they “have a social responsibility.”  For its part, APCCQ press releases insisted that the supposedly idealistic, government-subsidized Réseau Plus is nothing more than “unfair competition.”Eventually, Culture and Communications Minister Christine St-Pierre set up a group to forge agreements between Réseau Plus and the APCCQ. And probably getting jittery about the unrest in Quebec, Cineplex Entertainment met with Rock Demers and Louis Dussault. The exchange resulted in an agreement that the distributor could offer films to alternate venues if they were not programmed by commercial theatres within a “reasonable time.”

The Black Sheep Has Teeth

The first harbinger was the resignation of Télévision Quatre-Saisons president René Guimond soon after film production and distribution house Remstar put in a bid to buy the ailing TV network, nicknamed the “black sheep.” The moment had arrived, said Guimond, to hand over the reins to someone else.Soon after, Remstar execs Julien and Maxime Rémillard announced details of their re-structuring plan. While the Réseau Plus mêlée (see above) aggravated people, Remstar’s most dramatic announcement set off shock waves. Not only would the Remillards cut deeply into TQS personnel, they intended to eliminate news gathering and reporting operations by September. Before the Black Sheep could say Baa, the story was on front pages. TQS’ union protested to TV and Radio watchdog, the CRTC. Quebec premier Jean Charest, backed by all the parties in the National Assembly, called on the government regulator to insist that the network adhere to its current license requirements and broadcast news. Remstar claims that its competitors offer more than enough coverage. But everyone else seems to think that an information blackout would descend on regional viewers if TQS, which has been criticized for the inadequacy and superficiality of its reporting, shut down its newsrooms. The CRTC will mull over Remstar’s plans in early June.

As the Montreal Canadiens showed more hockey smarts than it has in years, Quebeckers attached Habs flags to their cars and tripped on visions of the Stanley Cup. One guy I crossed paths with pointed to the Canadiens’ logo shaved onto the back of his head. One can only speculate about where female fans prone to body embellishment expressed their hope that the team would rack up enough playoff wins to compete in the ultimate game. Cable sports channel RDS is a major beneficiary of the Habs’ success. Never before has a specialty outlet so dominated the Quebec market in time slots normally controlled by conventional broadcasters. For instance, an average of 2 million viewers watched RDS’ telecast of the 7th and final game between Montreal and Boston, the number rising to 3 million in the final moments. The 6th game topped the audience for the 1993 Stanley Cup, and some ratings were better than pan-Canadian numbers for CBC hockey broadcasts.

Maurie Alioff is a film journalist, critic, screenwriter and media columnist. He has written for radio and television and teaches screenwriting at Montreal’s Vanier College. A former editor for Cinema Canada and Take One, as well as other magazines, his articles have appeared in various publications including The Montreal Mirror and The New York Times. He is Northernstars.ca’s Québec Correspondent.