(January 30, 2018 – Toronto, ON) Two films in 2017 shattered historical stereotypes of what Canadian films are and are supposed to be — Guillermo del Toro’s The Shape of Water and Denis Villeneuve’s Blade Runner 2049.

But I hear you say, what the heck are you talking about? Neither film is Canadian. Well, yes and no. While it’s a 100 percent American production from Fox Searchlight Productions, The Shape of Water is being enthusiastically embraced as Canadian due to the fact that it was shot entirely in Toronto studios with exteriors filmed in Hamilton passing for 1950’s Baltimore, and its entire production crew, apart from the top talent, was made up of local Toronto union members.

Of course, two Golden Globes, 13 Oscar and 12 BAFTA nominations — many going to those local union members — has made the Toronto media sit up and take notice and embrace The Shape of Water with civic pride. It also helps that Mexican-born director del Toro has made Toronto his home base for several years now.

By Canadian tax laws, Blade Runner 2049 is in fact a Canadian film. In reality, it’s an American movie, a joint venture between Alcon Entertainment, who own the rights to the Blade Runner franchise, and Sony Pictures made in association with Ridley Scott’s Scott Free Productions and Vancouver’s Thunderbird Films. It was filmed entirely at the Korda Studios in Hungary.

Beyond its star, Ryan Gosling, and director, the film’s Canadian connection is tantalizing and extensive, earning its official minority co-production status with the Canadian Audio-Visual Certification Office, and tax credits from the provinces of Quebec, Ontario and British Columbia.

Blade Runner 2049 snared five Oscar nominations, a record for a Canadian film (which ties it with Atlantic City, a Canada-France co-production from the tax-shelter era), and eight BAFTA nominations (including one for Villeneuve for best director, something that the Academy unfortunately choose to overlook). Giustra, the founder of Lionsgate Films and a current director with

Thunderbird Films, and Tim Gamble, CEO of Thunderbird, worked for years with Alcon Entertainment to bring Los Angeles Police Department bounty hunter Rick Deckard back out of retirement and onto the silver screen. “We’ve been involved on this project for four or five years now and to see it finally being made is a dream come true,” Gamble said from his Vancouver office.

Blade Runner 2049 is a sequel to Ridley Scott’s 1982 classic. Scott served as executive producer and gave Villeneuve, Hollywood’s most in-demand Canadian director, carte blanche. The sequel is cold, slow and grandiose, and perfectly captures the detached coolness of its predecessor. It unfolds at its own esoteric pace, more concerned with exploring the bruised psyche of Gosling’s K, and the dark corners of the dystopian world he inhabits, than with shootouts, beats-per-minute action sequences and spaceship chases. It’s an elegant and thoughtful continuation of a sci-fi classic, and Villeneuve’s enormous talent is on full display with this visually spectacular, tonally haunting, dream-like epic.

Am I the only one to notice that The Shape of Water is a mash-up of The Creature from the Black Lagoon (1954) and Ron Howard’s Splash (1984), a film described as a love story between a young man and a mermaid. Bare with me a minute here. Substitute Sally Hawkins’ lonely hearts character in The Shape of Water for Tom Hanks’ love-starved bachelor in Splash; her buddy/comic foil Octavia Spencer for 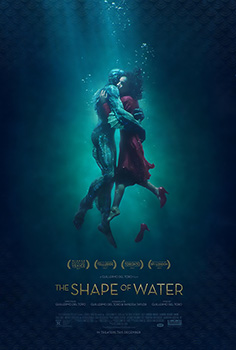 Despite the art-house pretensions and overriding Cold War themes of The Shape of Water, the storyline is basically the same as Splash and the end is almost a direct steal.

At the end of Splash, the army pursues Hanks and Hannah through the streets of Manhattan as they make a mad dash for the water; in The Shape of Water, it’s a murderous Shannon who chases the creature and Hawkins through the streets of Baltimore to the water’s edge. In both films the protagonists make it just in the nick of time; and in both films, Hanks and Hawkins instantaneously and magically adapt to life in the deep with their true loves.

In total, 13 Canadians have been nominated for Oscars this year, which has to be record number. Anthony Leo, co-producer of the animated feature The Breadwinner, a Canada-Ireland-Luxembourg co-production based on an award-winning Canadian novel by Deborah Ellis; Christopher Plummer for best supporting actor in Ridley Scott’s All the Money in the World (it’s Plummer’s third nomination; he won in 2010 for Beginners); The Shape of Water’s sound editing and mixing crews, which includes Nathan Robitaille, Nelson Ferreira, Glen Gauthier, Christian T. Cooke and Brad Zoern; The Shape of Water’s co-producer, J. Miles Dale, and it’s production and set design team, including Paul D. Austerberry, Jeffrey A. Melvin and Shane Vieau; Winnipeg-born editor Sidney Wolinsky for The Shape of Water and Vancouver-born production designer Dennis Gassner for Blade Runner 2049.