A Dragon Talks About Film
by Ralph Lucas – Publisher

(June 9, 2021 – Toronto ON) In late May we learned that serial entrepreneur Vince Guzzo would be in Toronto in early June and open to doing some interviews. Early June was a bit up in the air as I had a day full of appointments I couldn’t move and our corporate head had previous commitments on the specific day the president and CEO of Cinemas Guzzo would be in town. I asked if I could submit a few questions via email and if he had time perhaps he could respond in the same way.

Some quick background: Vince Guzzo is the only son of Italian immigrants, who early on believed he could turn his father’s small theatre business into something very much larger. However, to do that he would need to take on the large and established exhibitors. In 1998, he did just that. He sued the biggest movie competition in Canada to gain equal opportunity for “the little guy” to show first-run releases — and won! Today Cinemas Guzzo is the number one operator in Quebec and the third largest movie exhibitor in Canada.

Usually referred to as a cinema mogul, Guzzo’s many business interests have grown, some of them offshoots of the movie theatre chain. Known as Mr. Sunshine, he has been quoted as saying “The sun can be warm and comforting — but if you get too close, it could burn you.” He joined the team of potential investors on the CBC realty series The Dragon’s Den in September of 2018.

I still look forward to meeting him one day, but thank him for taking the time to reply to our questions about the film business in general and Canadian film in particular. 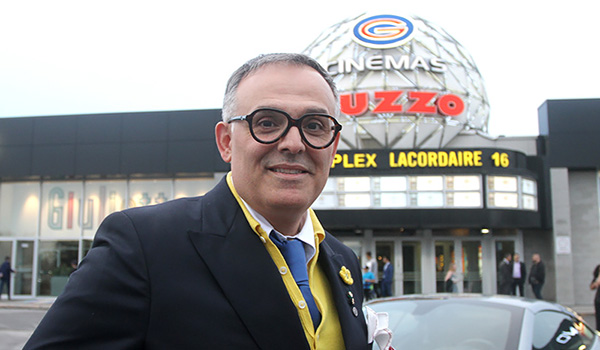 RL: Over the past many decades when the news media has covered the film exhibition business readers are constantly reminded that cinemas don’t make money on ticket sales but rely on the concession stand to make a profit. Is that true? And if true, what percentage of their total revenue does the average cinema make from just showing movies?

VG: It’s absolutely true, and this is one of the reasons we refused to re-open our theatres until we were allowed to sell concession products despite the fact that the Provincial Government permitted us to and that’s how #popcorngate came about. The reality is that half of all ticket sales go to distributors and 40-50% of our revenue and 60-70% of our profit margin comes from food and beverages sales. That is a lot. Between social distancing, limited capacity, and the curfews, we were doomed not being allowed to sell concession products.

RL: Canadian films have had an on-and-off relationship with cinema chain owners, or maybe the issue is with distributors. There was a time a number of years ago when a Canadian film might get a two-week run. Then it became one week. Last year, as Northernstars was keeping track of what Canadian films were playing where, we noticed a lot of Canadian films were just getting 3- day runs. They’d open on a Friday and close on the Sunday. Who makes that decision? And what factors play into that decision? For example, does having a known director, Denys Arcand, David Cronenberg, help? Or does it just not matter when it comes to Canadian film?

VG: Unfortunately, if a film, Canadian or not, doesn’t sell tickets, it can’t continue to run. I am an art lover and always want to promote and support local artists and companies. Cinémas Guzzo is known for giving Canadian films a spotlight and as an example of this, we’ll soon be presenting Livrés chez vous sans contact, a Quebec film that we’re aggressively promoting. Our streaming service also offers an array of Canadian movies in both French and English.

RL: We know we have a vast talent pool in Canada and particularly in Québec with its own home-grown star system. We also have a huge talent base behind the cameras. So…what is the greatest weakness in Canadian film? We think it’s lack of promotion or advertising funds. Do you agree?

VG: Yes! Lack of funding and a proper marketing budget is the biggest challenge. We see lots of bad blockbusters with recycled storylines that still make a fortune, whereas quality movies are not being promoted to prospective audiences. It’s unfortunate because we have jewels that remain unknown and this needs to change.

RL: Talk about the “cinema experience” and what people miss by not watching films on a big screen in large numbers?

VG: These are two different things. Certain films are just as good on a small screen as a big one. But others really should be seen on the big screen, in an auditorium, for a complete experience. Especially in our current environment, it is not about the size of the screen but rather creating a nostalgic moviegoing experience where people get to laugh and cry together and be immersed in the excitement together.

RL: Some say the reason Québec films do so well is that they are made for what is, essentially, a closed society. My take is that the most successful Québec films, no matter the story line, are made for an international audience. It sometimes appears as if English Canadian films are made primarily for an English Canadian audience. In the quest to “tell our own stories” and all the government funding that goes into that, we miss the opportunity of reaching a very much larger audience in Canada, in Québec and internationally? Do you have any thoughts on what might make Canadian film more popular?

VG: Artistically, it makes sense to want to tell a story that means something to you, personally. Many American films showcase just a small part of America or an individual’s personal journey. All stories can be presented in a relatable or interesting manner. I think the challenge, again, comes down to the promotional budget. If the cinematography is brilliant and the story speaks of the human experience, who cares that it’s set in a small town in Manitoba vs. downtown Montreal. I think movies from Quebec have found their niche and perhaps have slightly more cachet, because they are in French, and Montreal is an artistic city rich in culture.

RL: Canadian film festivals have reached a vastly larger audience by streaming their curated programs. Have you ever thought of using that “curated” approach to what you’re offering in your theatres? In short, every day is a mini-film festival because of what you’re showing?

VG: I’m always interested in promoting Canadian artists in our cinemas when the demand is there. Additionally, our streaming platform, which officially launches this summer, we will be offering a broad repertoire of local productions. Including these are especially important to me. Watching movies at home is less of an experience, but it’s also less of a commitment. I believe that highlighting local productions on our streaming platform will introduce a new audience to some Canadian gems and hopefully increase the demand for Canadian content.

RL: Finally, taking all the various components of a complicated world together – pandemics, unemployment, failed local economies with their shuttered bars, restaurants and boutiques, a huge investment in streaming content on larger and larger home screens…where do you think the exhibition business will be in five or ten years time?

VG: Our industry, much like many others, has taken a huge hit during the past year and a half. That said, I’m convinced that movie theatres will see post-pandemic revival. I think, if anything, this period of being confined indoors has made people remember the grandeur and excitement of seeing a film on the big screen. People will crave the moviegoing experience more than ever and not take it for granted. Think about it, people invest a fortune in state-of-the-art kitchens in their homes, but they still go to out to eat at a restaurant.

Our thanks again to Vince Guzzo for taking the time to answer our questions. Season 16 of The Dragon’s Den premieres on October 14, 2021.

All Cinémas Guzzo theatres opened on Friday, May 28, 2021, strictly following all provincial health and safety guidelines.