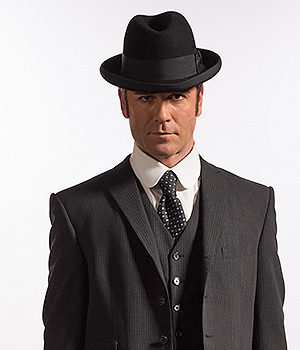 (October 29, 2015 – Toronto, ON) – Lovers of mysteries, lovers of Christmas stories and lovers of the hit CBC series Murdoch Mysteries will rejoice this season as the very first Murdoch Mystery holiday special will help ring in the holidays. And it’s a star-studded cast as film and TV legend Ed Asner, Downton Abbey’s Brendan Coyle and costar of the series Perception, Kelly Rowan join the cast of the two-hour production, A Merry Murdoch Christmas.

The plot is wonderfully twisted in all the right places. On a snowy night before Christmas, Murdoch (Yannick Bisson) and Ogden are attending a party at the McGowan mansion with Inspector Brackenreid (Thomas Craig), his wife Margaret (Arwen Humphreys) and Constables Crabtree (Jonny Harris) and Higgins (Lachlan Murdoch). The evening’s guests, who include orphans and patients from the Hospital for Sick Children, are being treated to a production of The Little Match Girl featuring a young Mary Pickford (Peyton Kennedy) in the title role. But for the children the real treat is when Mr. Rankin (Brendan Coyle) and hostess Mrs. Millicent McGowan (Kelly Rowan) introduce their special guest, St. Nick. Unfortunately, when the curtain lifts to reveal Alister McGowan, the philanthropist host in a Santa suit, he’s lifeless and the generously donated gifts for the needy children have been stolen.

As Murdoch investigates McGowan’s murder, he learns the local business tycoon was avowed enemies with his former partner Cyrus Lynch. The Toronto Constabulary is unable to locate their prime suspect, but has little difficulty finding the missing booty, which is being handed out on the street by a man claiming to be the real St. Nick (Ed Asner). Despite the protestations of his helper, Mary Pickford, they arrest him.

For Brackenreid, the crime brings up sour memories of childhood Christmas disappointments, leading him to admonish Constable Jackson (Kristian Bruun) for putting up holiday decorations in the stationhouse. Meanwhile, Crabtree is sullen when his own plans go awry and it appears he will be alone for the holidays. But when nefarious forces intent on tarnishing the spirit and goodwill of the season suddenly appear, Murdoch realizes that in addition to solving a terrible crime, he must also save Christmas.

Developed and produced by Shaftesbury, in association with CBC, ITV STUDIOS Global Entertainment and UKTV, this Christmas special is written by series executive producer and showrunner Peter Mitchell and directed by Michael McGowan (Between, Still Mine). A Merry Murdoch Christmas is currently being filmed on location in Ontario and production will continue until early November.

A Merry Murdoch Christmas will premiere on Monday, December 21 at 8PM Eastern, 8:30 (NT).