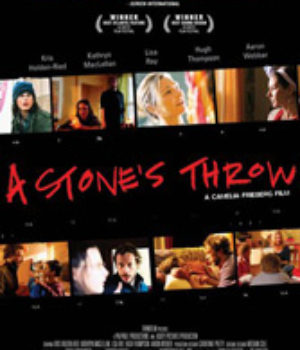 People in the know in the Canadian film biz immediately associate the name Camelia Frieberg with some of Canada’s best movies released in the last decade. As a producer she helped guide movies like The Sweet Hereafter, The Five Senses, Bollywood/Hollywood, Past Perfect and Wilby Wonderful. So, after first directing a short, it came as no surprise that she would want to apply her talent to making a feature. Completed in 2006, A Stone’s Throw premiered at the Toronto International Film Festival to polite, but not very enthusiastic, applause. However, it went on to win Best Atlantic Feature at the 2006 Atlantic Film Festival.

The problem with the film begins with the very opening frames. Using environmental still photographs by Edward Burtynsky, who was the subject of the documentary,Manufactured Landscapes, the feel and pace of a documentary is established and guides the rest of this drama that is otherwise well acted and well shot.

A Stone’s Throw mixes a cast of relative newcomers with some fairly well established actors. Lead Kris Holden-Ried first appeared on the small screen in 1995 as the star of the TV movie, Ivanhoe. Kathryn MacLellan has been in a string of Canadian films since 2000. And Lisa Ray has more than a dozen projects under her belt in the last six years and captured our imaginations with her studied and understated performance in the remarkable Deepa Mehta film, Water just a few years ago. But this film is about serious business.

Holden-Ried plays a photographer, Jack Walker, who has built a reputation for his photographs of what major polluters have done to the environment. But more than just a 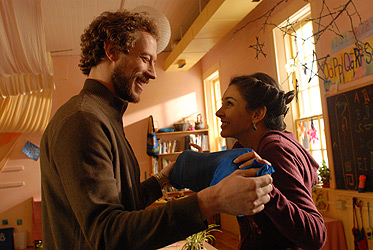 photographer, he is an activist of sorts who is on the run from police because he has been accused of torching the offices of a gold mining operation. When he arrives back in the tiny hamlet where his sister lives he is looking for both friendship and shelter. The town may represent community, but the relationships portrayed in this film are all fractured. Kathryn MacLellan plays Jack`s sister, Olivia, a single parent mom. She introduces Jack to her friend Lia (Lisa Ray) a kindergarten teacher and single parent mom. It seems like no one here is connected although Jack establishes a closeness with his nephew, Thomas, played by the young actor, Aaron Webber. He also falls for Lia, but it is the unfolding of this relationship that was most disappointing to me. When people fall in love they become giddy, playful, happy. At least, they should. Lisa Ray`s character seems ready to explode but has been restrained by the seriousness of the story and it hurts her performance and the film.

Yes pollution is a serious topic and the impact it has on the health of people living near to, or working in, industries that pollute fills newspapers almost daily. The predicament Jack Walker finds himself in is also serious. These are large, important themes that could have been painted in bright, bold colours. But like much of the landscape in the film, the scenes are muted, the colour grey. It is not quite still life but it is life subdued and somber. In movie making it is often said that the words tell us what to think, but the music tells us what to feel. The soundtrack for A Stone`s Throw matches the images perfectly but the over all sensory message we receive is a decided feeling of melancholy.

Also see: The Cast & Crew of A Stone’s Throw.

Photo by Mike Tomkins and poster courtesy of Mongrel Media. Used with permission

Ralph Lucas is the Founder and Publisher of Northernnstars.ca. He began reviewing movies while in radio in Montreal in the mid-1970s.