(December 4, 2019 – Toronto, ON) The Academy of Canadian Cinema & Television has announced the recipients to be honoured with 2020 Special Awards. They will be honoured at the gala award ceremonies during Canadian Screen Week, March 23 – 29, 2020. These honourees span all aspects of television, film, and digital media. They include David Suzuki, Alex Trebek, Dan Levy and Tina Keeper.

For his exceptional lifetime of work, David Suzuki will be given the Academy’s Lifetime Achievement Award. For his ongoing contribution to the media industry, the Academy Icon Award will be presented to Alex Trebek. The Radius Award is given to a Canadian whose work is making waves globally, and this year that award will go to Dan Levy. And for her exceptional body of work in Canadian television, the Earle Grey Award is presented to Tina Keeper.

Dr. Suzuki is a scientist, broadcaster, author, and co-founder of the David Suzuki Foundation. He is Companion to the Order of Canada and a recipient of UNESCO’s Kalinga Prize for science, the United Nations Environment Program medal, the 2012 Inamori Ethics Prize, the 2009 Right Livelihood Award, and UNEP’s Global 500. Dr. Suzuki is Professor Emeritus at the University of British Columbia in Vancouver and holds 29 honorary degrees from universities around the world. He is familiar to television audiences as host of the CBC science and natural history television series The Nature of Things, and to radio audiences as the original host of CBC Radio’s Quirks and Quarks, as well as the acclaimed series It’s a Matter of Survival and From Naked Ape to Superspecies.

Born in Sudbury, Ontario, Alex Trebek has been the host on more than 8,000 episodes of Jeopardy! He has won six Daytime Emmy® awards for Outstanding Game Show host and a Lifetime Achievement Award from the National Academy of Television Arts and Sciences. He has also been honoured with a Guinness World Records® record for Most Game Show Episodes Hosted by the Same Presenter.


Dan Levy is an Emmy® nominated showrunner, and a writer, director, producer and actor, best known for his work on Schitt’s Creek, which he co-created with his father, Eugene Levy. In 2019, the show earned four Emmy® nominations, including Best Comedy Series. Now heading into its sixth season on CBC in Canada and on Pop TV in the U.S., the first five seasons of Schitt’s Creek are currently streaming on Netflix.

Tina Keeper, a Norway House Cree, is best known for her work on the hit television series North of 60. In 2010, she partnered with Buffalo Gal Pictures to create Kistikan Pictures Inc. to collaborate in the development and production of Indigenous film and television. Most recently, Ms. Keeper acted in the illustrious film Falls Around Her by Anishinaabe director Darlene Naponse, and in 2018, she acted in and co-produced the feature film Through Black Spruce with Serendipity Point Films. In 2017, she co-produced the 360 3D VR short film Sky Stories with Tangent Animation. In 2015, she produced the feature film Road of Iniquity by Maliseet director Mark Ennis. In 2014, she co-produced Going Home Star, a full-length ballet co-produced by the Royal Winnipeg Ballet and the Truth and Reconciliation Commission. From 2010 to 2013, she produced Cashing In, a dramatic series for APTN. Finally, also in 2013, she produced a short documentary for MTSOnDemand called The REDress REdress Project. 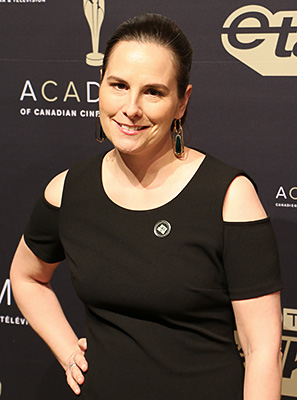 “Our Canadian content creators have become masters of turning their unique experience into art that resonates beyond our borders, a sentiment that rings true of every honouree this year,” said Beth Janson (pictured), CEO, Academy of Canadian Cinema & Television. “This widely regarded group of industry leaders and pioneers reflects the very best in Canadian visual storytelling and are some of the sharpest talents Canada — and the world — has to offer.”

“The recipients of the 2020 Special Awards are as diverse as our country, and their differences shine as brightly as their common thread: an impact that cannot be denied,” said John Young, Chair, Academy of Canadian Cinema & Television. “In the face of our ever-changing reality as creators in Canada, I am very excited as we embark on a new decade with these extraordinary honourees as partners and leaders in our industry.”

Other awards announced today include the Margaret Collier Award, which this year goes to David Shore. Originally from Canada and a former lawyer, Shore has been writing and producing television for more than 20 years. He currently serves as executive producer and showrunner on the ABC hit drama The Good Doctor. Prior to that, he created the groundbreaking medical drama House, which ran on Fox for eight seasons. His work on House earned him several Emmy® nominations for producing, and he won the Emmy® Award for Outstanding Writing for a Drama Series, as well as the Humanitas Prize and the Writers Guild of America Award.

For their extraordinary impact on the growth of the Canadian media industry, the Academy Board of Directors’ Tribute will be presented to: Robin Mirsky and to Michael Donovan. Ms Mirsky is a veteran film and television industry executive who has been involved in the financing, strategy, and development of thousands of award-winning productions that have had global distribution. Since 1989, she has been the Executive Director of the Rogers Group of Funds established by Rogers, which has provided almost $600 million in funding for more than 2000 television and film projects. Her career includes directorships on the Boards of the Canadian Film Centre and the Banff World Media Festival, and she also serves as Co-Chair of the Hot Docs Documentary Festival Board of Directors, and previously as Vice-Chairman of the Academy of Canadian Cinema and Television.

Michael Donovan is a producer, writer, and content executive from Halifax, Nova Scotia. Following an unconventional start in law, Mr. Donovan pursued his passion for creativity and co-founded Salter Street Productions, producing the iconic Canadian series This Hour Has 22 Minutes and Academy Award-winning documentary Bowling for Columbine, for which he received an Oscar in 2003. Mr. Donovan also wrote and produced the highly acclaimed 2007 film Shake Hands With the Devil, which was nominated for numerous awards including Genies for Best Adapted Screenplay and Best Motion Picture. Known for his industry foresight and relentless belief in the demand for quality entertainment, Mr. Donovan founded DHX Media in 2006 and held the CEO position for several years. Through his hard work and dedication, DHX Media has grown to be one of the world’s leading providers of entertainment content for children and families.

For his exceptional body of work in television journalism, the Gordon Sinclair Award for Broadcast Journalism has been given to Anton Koschany. He is a multiple award-winning journalist with more than 45 years of experience in news and long-form reporting, producing, and management. He has been with W5 since 1993, first as producer then later as senior producer, and currently as head of CTV News’ renowned program. Koschany is one of the country’s most experienced electronic journalists and is actively involved with CTV’s political journalism. He has covered every provincial, municipal and federal election since the late 1990s as the executive producer of CTV Elections.

In recognition of an extraordinary humanitarian contribution or act of compassion by a professional working in the Canadian media industry in the prior year, the Humanitarian Award is presented to Nathalie Younglai, who has gone from being a professional harpist to reality TV director to writer for children’s TV and now for primetime drama. Younglai founded BIPOC TV & Film, a grassroots organization advocating for the meaningful representation of Black, Indigenous and People of Colour in front and behind the camera. She is a recipient of ACTRA Diversity’s Sandi Ross Award, Ben Watkin’s Breakthrough Award, and ReelWorld’s Trailblazer Award. She was a nominee for a Colleges Ontario Premier’s Award, and a nominee for both a Canadian Screen Award and a Daytime Emmy® for her writing on Dino Dana. Ms. Younglai is currently writer and co-producer on CBC’s hit drama Coroner.

Industry awards include the Industry Leadership Award presented to Crave, and the Outstanding Media Innovation Award presented to Secret Location for Vusr. Secret Location has been developing advanced technological platforms and innovating on new narrative forms for over a decade, and has received over 250 awards and nominations, including the first Primetime Emmy® Award for a VR project. In 2016, Secret Location launched Vusr, a suite of products to distribute, manage, and monetize VR content.

The Academy of Canadian Cinema & Television will release their full list of nominees for the 2020 Canadian Screen Awards on February 18. The awards ceremonies and related events span Canadian Screen Week, which this year begins on March 23 and ends with the broadcast gala on CBC on Sunday March 29.