Sharon Acker’s first few days of life may have held a certain trauma if anyone that young can actually remember events from their earliest moments. Adopted when she was nine days old, Acker grew up in Toronto and seemed to live what most people would call a perfectly normal life through those early years. She went to Davisville Public School then John Fisher Public School and finally Northern Vocational School where she graduated from a four-year commercial art course in 1953.

She continued to act with her high school drama group until her professional career began in 1955 when she was asked to audition for CBC-TV by Eva Langbord, a Toronto casting director. She was in the made-for-television movie Anne of Green Gables in 1956. That was also the year she joined the Stratford Shakespeare Festival but only stayed long enough to warrant a mention in any biography. Acker had traveled to England with the company to perform in that year’s production of Henry V. She only had a small part, but it was a beginning. When the company headed home to Canada, Acker decided to stay in London to see if she could get work there.

As it turned out the famous British producers John and Ray Boulting were casting for the film version of the Kingsley Amis Book, Lucky Jim, with Ian Carmichael and Terry Thomas already onboard. Acker was one of hundreds of young girls who auditioned. The Montreal Gazette carried a story from London in August of 1957 in which the brothers were 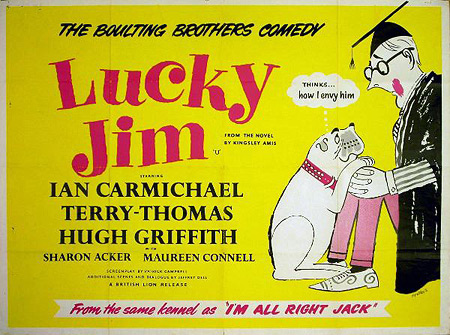 quoted as saying, “She`s freshly appealing without having the over-purified air of the hockey field about her like so many English starlets. She has sex appeal and she knows it, without being brash about it. And she is a born actress.” The British press agreed. After Lucky Jim screened at the Edinburgh Festival, The Daily Telegraph called her “a stunning newcomer” and the Scotsman said “the enchanting actress beautifully personified… the girl who ultimately loses her heart to Lucky Jim”

But Acker had already lost her heart. The Boultings were a little wary when the young actress sent for her Canadian fiance, Ron MacDonald, and married him secretly. When Lucky Jim wrapped, the couple returned to Canada and their first child was born in early August of 1957. She had signed a seven year contract, but as a reporter had written in November of the previous year, Acker only wanted to be a “good wife and have lots of babies.” The Boultings didn’t press Acker about the contract. John Boulting said, “It`s too bad. In our opinion she is the most promising international film star material we’ve found.”

Back home in Toronto she found work quickly appearing in some CBC television dramas under the banner of General Motors Presents. It was the Golden Age of Television. In 1961 she landed a role in the five-part CBC production of Macbeth. Adapted and directed by Paul Almond, the televised production starred a pre-James Bond Sean Connery in his first North American role, as well as his first time starring as a central character in a Shakespearean production.

The next few years were quiet and she did a little modeling. Later in life when she looked back on that time she found much of it very amusing. For example she wasn’t a smoker then, nor later, but one of her assignments was to appear 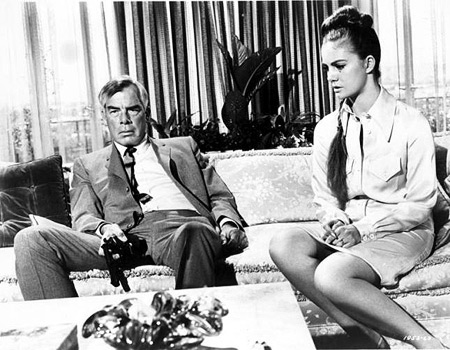 in some print advertising for Alpine cigarettes in which she appeared as a sort of wood nymph with waist-length hair sitting by a waterfall. The ad ran for months on the back cover of Life and TV Guide.

More than five years had passed when Sharon Acker landed her first role in the United States and it was quite a debut. She was signed to appear in John Boorman`s Point Blank playing the wife of star Lee Marvin. Angie Dickinson played Marvin`s sister. The 1967 film was largely ignored at the time but later became regarded as one of the top thrillers of that era. In addition to Acker, it costarred Canadians, John Vernon and Lloyd Bochner. Carroll O’Conner, who would go on to fame in All In The Family just a year later also had a role in Point Blank.

Seemingly always on the move, Sharon Acker returned to Canada to appear in an episode of Wojeck, the CBC-TV-series starring Vernon as a crusading coroner. While here she was cast in Don’t Let The Angels Fall. Written by Timothy Findlay and directed by George Kaczender, it was the first Canadian feature-length film to be accepted at the Cannes Film Festival, going on to be nominated for the Palme D’Or in 1969.

She made her last feature film in 1981. By then she had established a strong television career. She played Della Street in The New Perry Mason series from 1973 to 1974. Her last role was that of Dr. Grace Sundell on The Young and the Restless in 1992.

Her private life is just that, private. It is known that she had two daughters, Kirsten and Gillian. Her second husband, the producer and sometime actor Peter J. Elkington passed away in Florida in February of 2001.

Sharon Acker once said “Canadians are highly respected in Hollywood. One director told me I have ten times the training most American actresses have… I love coming home to Canada though. I’m a confirmed flag-waver.” In October of 1999 she wrote to Northernstars recalling some of her early career. “It was an illustrious and creatively ambitious time in our television industry,” she wrote. “With government funding we produced some of the finest television theatre, comparable to the BBC and better than anything out of the USA, with the possible exception of Hallmark Hall of Fame and US Steel Hour.”

She concluded her letter by writing, “I’m flattered to be included on your website.” We were honoured to be the recpient of the letter, a brief biography and the photo we use of Sharon Acker on this and on her filmography page. We’d love to hear from her again.

This biography is Copyright © 2012 by Ralph Lucas and may not be used without prior written consent. For more information about Copyright, click here.