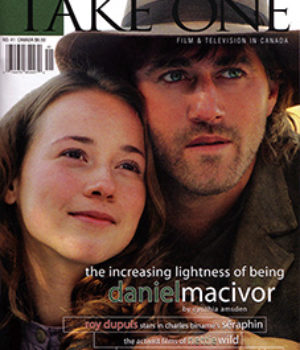 A Passion for Social Justice:
The Activist Films of Nettie Wild
By Tom Lyons

Vancouver, 1981: The game–show contestant is nervous. The host of the show has just asked her what she would do if she won an expensive new home. The clock is ticking, the studio audience is restless and the time–up buzzer is about to blare. “I’d live in the house!” guesses the contestant, a polite lower–middle–class lady who works as a dental hygienist to pay her rent and support her son.

Wrong. The host shakes his head. The audience groans. The next contestant is the lady’s greedy landlord. He says he’d sell the house and use the profits to buy and sell more real estate. The host smiles. The audience cheers. The landlord wins a stack of cash and the right to evict his tenant. That’s because, the host explains, the money–grasping landlord is on the inside track! Just like the title of the game show, which is called The Inside Track! Get it? A laugh riot, right?

Apparently not, judging by the underwhelming public response to the 1981 film that features the game–show parody. Titled Right to Fight, the satirical documentary on Vancouver’s housing crisis livens up its earnest interviews with not only wacky game–show parodies but also anti–capitalist tap dance numbers and bouncy cabaret pieces about the evils of unregulated land speculation. Despite its rousing pleas for social justice, and its energetic hoofing, the “springtime–for–Stalin” movie fails to attract much of an audience. Its novice writer/director, Nettie Wild, who doubled as the nervous game–show contestant, also fails to win much attention.

The Philippines, 1987: The plucky Ms. Wild is making a second attempt to film the people’s glorious revolutionary struggle, and has gotten herself into more I Love Lucy–like troubles. Only this time the sadistic game–show figure tormenting her is for real. She is in the Philippines interviewing a notorious small–town DJ who spins syrupy MOR ballads, broadcasts anti–communist propaganda, and leads a paramilitary death squad that assassinates peasant guerrillas and those who support them. Ms. Wild supports the guerrillas. The DJ threatens to kill her. Her cameraman suggests they wind up the interview. Ms. Wild tells him to keep filming. The DJ continues bullying Ms. Wild and exposing his chop–women–into–hamburger serial killer side to the camera while “Color My World” plays in the background.

Mrs. Aquino, the new president of the Philippines, is caught on Wild’s camera shortly afterwards praising the same DJ for his outstanding vigilante work. The bizarre images open up a crack in the comforting Western belief that democracy and sanity have triumphed in the Philippines with the deposing of dictator Ferdinand Marcos. The film that comes out of Ms. Wild’s eight–month visit with the peasant guerrillas and their opponents, A Rustling of Leaves: Inside the Philippines Revolution, is noticed. It picks up rave reviews, a Genie nomination and distributors. Ms. Wild is also noticed. RCMP officers phone up the NFB and Canada Council bureaucrats who helped financed her trip and demand they cut off her funding. It seems Ms. Wild has been suddenly upgraded from obscure activist filmmaker to national security threat. Her lawyer is impressed.

Ottawa, 2002: Ms. Wild visits Parliament Hill with Philip Owen, the outgoing mayor of Vancouver. They are there to show a copy of Ms. Wild’s new documentary, FIX: The Story of an Addicted City, to Anne McLellan, the new federal health minister, other cabinet ministers and policy–makers. The documentary is a plea for the establishment of safe injection sites in Vancouver. The sites are necessary, say Ms. Wild and the mayor, to reduce the soaring rates of fatal overdoses and HIV infections in the city’s massive heroin–addict population. Thousands of addicts have died over the past decade, and thousands more will perish if something isn’t done, they say.

Addicts and their advocates have been making this argument since the early 1990s, to no avail. McLellan’s minions listen to Owen, watch Wild’s film and grant formal approval for the sites, even though such centres—where heroin is injected in a clean and supervised environment—are technically illegal. The new mayor of Vancouver, Larry Campbell, has also taken a strong stand in favour of safe injection sites.

The victory, however, makes Wild’s documentary, which picked up a glowing review in Variety, seem outdated to some activists. That’s because its coverage of the Vancouver crisis ends in the summer of 2002 on a downbeat note. The concluding title cards announce that the central figure of the documentary, Dean Wilson, a heroin addict and president of the Vancouver Area Network of Drug Users, has failed in his attempts to quit heroin and in his efforts to open safe injection sites. The title cards also explain that Mayor Owen has just been kicked out of his own party, the conservative non–partisan Alliance, for supporting the harm–reduction approach to addiction.

“One woman said, ‘can’t you change the title cards at the end of the movie and reveal the next chapter that shows that in the end the (safe injection crusade) was triumphant? Because if we show Owen’s defeat it will just be a signal for politicians not to take chances,’” says Wild, in a phone interview from her home in Vancouver where she runs an independent production company, Canada Wild Productions, with co–producer Betty Carson. “And I said to her: ‘The fact of the matter is this guy (ex–mayor Owen) did take a huge political hit.’ And what’s interesting is that these guys took huge hits, they really hurt and they still stood up to it. So that’s an even more heroic story. It’s also saying: ‘Hey look, you know, this no cakewalk.”

Wild’s reluctance to revise the documentary also stems from doubts about whether safe injection sites will be established in sufficient numbers. “There has to be major political will to free up major dollars to make sure that real drug treatment is in place, not just window dressing,” says Wild. But her main reason for leaving the documentary as it stands is the same reason she had for including so much negative material in the first place—she did not want to make a simplistic piece of propaganda. “I think, in the end, the truth is the only way that’s going to get us out of this mess. It’s really tough, because life is full of complexity and contradiction. That’s the reason why I tend to make long films, and why they involve various different points of view. My own point of view is overriding in terms of why the film was made in the first place; however, it’s really important to be able to dance with people who do not share your point of view. You have to get to the heart of the complexity,” she says. “And any time if I, as a filmmaker starts boiling stuff down to a simple scenario that is not a reflection of what’s really happening. I’m not doing the community any favours. I’m creating a piece of propaganda, and it just doesn’t work.”

While avoiding the bombastic political satire of Right to Fight, FIX also dispenses with the explanatory voice–overs of A Rustling of Leaves and the two documentaries that followed it: Blockade, Wild’s 1993 look at Native rights activists in British Columbia, and A Place Called Chiapas, her 1998 Genie–winning examination of the Zapatista uprising in southern Mexico. “My work is really moving away from the essay–type film, which Rustling and Chiapas were kind of edging their way towards. With FIX, there’s no narration at all,” says Wild, who worked in theatre (with Vancouver’s Headlines Theatre Company) and broadcast journalism (for the CBC) before moving into film in the 1980s.

With no narration to frame them, the absurdities and horrors of the Vancouver drug crisis loom especially large on screen. Images of addicts, police, businessmen, activists, politicians and reporters clashing with one another appear on screen without comment or explanation, and at times the very notion of imposing a rational frame on the drug–ridden chaos is held up to ridicule. Wild repeatedly shows addicts watching their own story unfolding on evening newscasts on televisions propped up in alleyways strewn with needles and crack pipes. The recurring image suggests the daily news cycle is no more meaningful than the daily addiction cycle. The junkies are addicted to crack and heroin, the media are addicted to sensationalism and the politicians are hooked on platitudes and inaction.

The lack of narration also means that Wild’s characteristically detailed analyses of the larger market forces determining the local action are missing. Wild says this particular absence wasn’t by choice, and it still bothers her. She was unable to gain sufficient access to the business community to investigate allegations that Vancouver land speculators have been fuelling the drug addiction problem in the city’s rotting downtown east side. Wild was also unhappy about being unable to explore the global market forces behind the problem. One of the first things she learned from addicts was that it is impossible to separate the Vancouver crisis from the international drug trade. The bargain–basement prices of crack and heroin in Vancouver are the direct result of the port city’s location at the intersection of the Asian and Colombian drug–smuggling routes. The sudden spike in overdose deaths in Vancouver in the early 1990s was likewise triggered by events half–a–world away.

“China White hit Vancouver, and it wasn’t heroin. It was Fentanyl, which is a synthetic opiate and it coincided with the fall of communism in the Soviet Union. That’s where Fentanyl was coming from, the labs in Russia,” says Dean Wilson, the heroin addict at the centre of FIX, during his visit to the Toronto International Film Festival to promote the film, which opens in theatres across Canada this spring. “So we got this huge influx of Fentanyl, which is like a thousand times more powerful than heroin. It killed a lot of people. Plus the competition from Fentanyl caused the Chinese triads to drop the price of real heroin. So all of a sudden we had pure heroin on our streets that was actually less than half the price it used to be. Then everybody just started dying.”

Getting Russian mafia, Asian triad members and Colombian drug lords to explain the finer points of their current distribution strategies proved impossible even for Wild, who in the past had successfully parlayed her don’t–mind–me–I’m–just–a–harmless–middle–class–lady persona into access to both left–wing guerrillas and right–wing paramilitaries. Wild now feels she has no choice but to temporarily abandon the documentary format altogether and re-approach the subject in a dramatic feature. “I want to get into the dope dealing in the corporate towers, in the stock exchange and the huge illicit economy that is supporting the drug trade in Vancouver. That’s where we have to fictionalize it, because no documentary camera can go there,” says Wild, who is currently writing a screenplay for the dramatic feature, which will be her first. “It’s a very difficult world to penetrate. All the concrete stuff comes out in court, but that’s always about 10 years too late; so you’re always dealing with old information,” she says.

When this article was originally published in Issue 41 of Take One magazine, Tom Lyons was a Toronto–based freelance writer with the Canadian Press. His articles for CP appeared in daily newspapers across the country. Northernstars.ca acquired the digital archives of Take One in 2007.