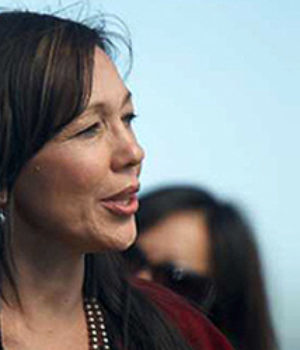 (March 6, 2017 – Toronto, ON) In advance of International Women’s Day on March 8, Canada’s largest performer’s union is shining the spotlight on Canadian actor, humanitarian and activist Tina Keeper by naming her the 2017 ACTRA National Woman of the Year. ACTRA bestows this honour annually on an ACTRA member who excels in both her artistic and advocacy achievements.

“As a performer, as an activist, as a community leader Tina Keeper has been an inspiration and a role model,” said ACTRA President Ferne Downey. “In addition to being a talented performer, she is a dedicated spokesperson on social issues. Her humanitarian work is far-reaching and powerful. She is deeply committed to the growth and development of Indigenous performing arts in Canada. We’re proud to honour her.”

“I am truly honoured,” said Tina Keeper upon being named ACTRA Woman of the Year. “It has been a privilege to work as an actor – a critical role within our country. I am especially grateful and proud, now, to participate with my sisters and brothers and support the voices and stories of Canadian creators. I am humbled to receive this award in the company of such esteemed sisters. Ekosani, thank you.”

An active member of Canada’s film and television industry for over thirty years, Tina Keeper is well-known for her role as RCMP officer Michelle Kenidi on the hit CBC series North of 60 for which she received a Best Performance Gemini Award.

A Winnipeg-based media producer, she is President of Kistikan Pictures (a partner company of Buffalo Gal Pictures). Recent productions include the feature film, Road of Iniquity; the critically-acclaimed Royal Winnipeg Ballet, Going Home Star; The REDress Project; and the APTN drama series Cashing In. Her upcoming feature Through Black Spruce, in co-production with Serendipity Point Films, is set to begin production in July, 2017.

Born in Winnipeg, Manitoba, Keeper is a member of the Norway House Cree Nation and remains actively involved in producing public education initiatives to build bridges between Indigenous and non-Indigenous people in Manitoba. From 2006 to 2008 she served as a Member of Parliament for Manitoba’s Churchill riding under the Liberal Party of Canada, and went on to serve as the Official Opposition’s Critic for Public Health and Canadian Heritage.

In 2004, she received a National Aboriginal Achievement Award (now the Indspire Awards) for her work in the arts, and has also won three American Indian Film Festival awards for her acting and producing credits. In 2002, she was named to the Order of Manitoba. Tina graduated from the University of Winnipeg with a Bachelor of Arts degree in Theatre, and has also trained at the Centre for Indigenous Theatre, the Banff Centre and the Sundance Film Institute.

The ACTRA Woman of the Year Award is bestowed annually on an ACTRA member who uses her passion to support her fellow female ACTRA members and women within the audiovisual industry as a whole. Tina joins past recipients Shirley Douglas, Tantoo Cardinal, Sandi Ross, Mary Walsh, Jean Freeman, Amanda Tapping and Catherine Joell MacKinnon.

ACTRA (Alliance of Canadian Cinema, Television and Radio Artists) is the national union of professional performers working in the English-language recorded media in Canada. ACTRA represents the interests of 23,000 members across the country – the foundation of Canada’s highly-acclaimed professional performing community.

New and Renewed at Global

A Trip Down Memory Lane