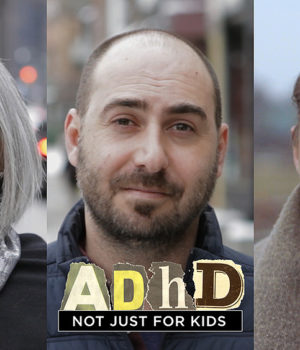 (March 14, 2017 – Toronto, ON) Chances are there’s someone in your family who has been diagnosed with ADHD. Or, someone you know. Maybe a neighbour, or a friend. And while there was a sense the condition was becoming epidemic in young people, there is a growing realization that those young people grow up and their ADHD remains something they and everyone around them has to deal with. Award-winning Canadian director Michael McNamara admits he was late in understanding ADHD.

“I thought I knew all I needed to know about ADHD,” he said. “I wasn’t one of those doubters who didn’t ‘believe in it.’ But it turns out I had a lot of misconceptions about ADHD and how profoundly and seriously it can affect a person’s life.”

And so McNamara did what any good, curious director will do. He turned his attention and his cameras toward the subject and the result is ADHD: Not Just For Kids, which airs this Thursday, March 16, on CBC.

“ADHD is the #1 psychological disorder in young people,” said McNamara. “Eleven percent of children in the USA are diagnosed with it (7% worldwide). And here is something I didn’t know – 30% of those kids continue to have ADHD into adulthood.”

Here’s a bit of information that might startle you. What do Bill Gates, Richard Branson, Alexander Graham Bell, Benjamin Franklin, Vincent Van Gogh, Salvador Dali, Pablo Picasso, US Presidents Thomas Jefferson, Abraham Lincoln, Dwight D. Eisenhower, George W. Bush and George H.W. Bush all have in common? You guessed it. Attention Deficit Hyperactivity Disorder, better known as ADD, or ADHD. A neurobiological disorder that leads to inattention, hyperactivity, and impulsivity. There’s another name that should be on the list, the documentary’s director, Michael McNamara.

“I’d been researching and working on the film for 18 months. And it became clear to me in the first few months that all the symptoms sounded very familiar. My partner at Markham Street Films and in life, Judy Holm, and I both did the Self-Report questionnaire published by the World Health Organization. I “passed it” with full marks. Judy did not. A specialist confirmed the results – I have ADHD. We were skeptical at first, but we both see a complete change in the way I function and work since my diagnosis and treatments.”

ADHD: Not Just For Kids calls upon a long list of experts to help explore this disorder. They include psychiatrist Dr. Mayer Hoffer, pediatrician Dr. Laura Gerber, who was diagnosed with ADHD as an adult (along with her three children), ADHD coach Robert Pal, specialist Dr. Ainslie Gray, and Dr. Jennifer Crosbie and Dr. Russell Schachar of SickKids Hospital.

At UC Irvine, Dr. Jean Gehricke demonstrates how some adults have been masking ADHD symptoms by self-medicating with nicotine, and the world’s first ADHD lab mice are put through tests at Florida State University by Deirdre McCarthy and Dr. Pradeep Bhide.

Dr. Ainslie Gray from Toronto’s Springboard Clinic and Doctors Russell Schachar and Jennifer Crosbie from SickKids Hospital explain how ADHD was long believed to be something adults outgrew, but it’s now understood that the symptoms can carry on into adulthood – often without being diagnosed.

ADHD used to be thought of as just for kids, but not anymore. An early myth about ADHD was that kids outgrow it. But they don’t, and not all kids with ADHD are properly diagnosed, and continue to suffer undiagnosed as adults. ADHD: Not Just For Kids dispels the myths about this syndrome, a condition that children and adults often live with unrecognized for years. Women especially tend to be ignored or misdiagnosed with anxiety and depression.

This is Must See television from one of the best filmmakers in the country. ADHD: Not Just For Kids can be seen on CBC’s The Nature of Things on Thursday, March 16, 2017 at 8PM.

Pierre Hébert: A Look Back