Alison Pill in Vice
by Staff

Vice explores the epic story about how a bureaucratic Washington insider, Dick Cheney, quietly became the most powerful man in the world as Vice-President to George W. Bush, reshaping the country and the globe in ways that we still feel today.


Adam McKay laid bare the Wall Street chicanery that led to the greatest financial collapse since the Great Depression in his incisive Oscar-winning The Big Short. In Vice, McKay joins forces with Christian Bale who plays one of the most elusive and secretive minds in modern American political history, the Machiavellian Richard Bruce (Dick) Cheney. The story tracks Cheney’s complex journey from rural Wyoming electrical worker to de facto President of the United States in a darkly comic and often unsettling inside look at the use and misuse of institutional power. 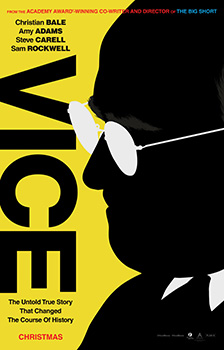 nominated production of Three Tall Women, written by Edward Albee, directed by Joe Mantello and opposite Glenda Jackson and Laurie Metcalf. She is currently shooting the upcoming FX series Devs from Alex Garland. Other stage credits include starring in House of Blue Leaves opposite Ben Stiller, This Wide Night with Edie Falco and costarring with Abigail Breslin in the Broadway revival of The Miracle Worker. She has been nominated for the Lucille Lortel award, the Outer Critics Circle and The Drama League awards for her work in Blackbird. She was also in Wait Until Dark, Reasons to be Pretty and Mauritius. Pill was nominated for a Tony Award for her Broadway debut in The Lieutenant of Inishmnore, and for a Lucille Lortel Award for On The Mountain. She won The Drama Desk Award for Outstanding Ensemble in the U.S. premiere of The Distance from Here.

The Backward Class Returns to Toronto