(February 27, 2010 – Toronto, ON) Pointe Claire is a sleepy community on that part of the island of Montreal called the West Island. People unfamiliar with the term often think that it’s a separate island somewhere west of Montreal, but in fact the West Island is home to everything from the city of Lachine west. It is often cited as the birthplace of Amanda Brugel, but while that is true, her stay there was short. Brugel grew up in Courtice, outside Oshawa, Ontario.

Her early ambition was to be a dancer, but a growth spurt meant that she literally outgrew her dance partners. In an article in the Toronto Star she admitted, “In heels, I’m 6 feet 1 inch. When I outgrew my male partners, I stopped.”  Many former dancers turn to acting and in Brugel’s case it was a nudge from a high school drama teacher that pushed her in the right direction. The teacher who suggested she go after a role in the school’s annual production. She tried out and ended up playing the lead in Anne of Green Gables. This led to a Fine Arts Talent Scholarship at York University where she attended the Theatre Program and graduated with a Bachelor of Fine Arts degree in 2000.   In the 20+ years since, Brugel has landed roles in more than 60 productions on the big and small screens, drawing the most attention when she landed the role of Rita on the award-winning series, The Handmaid’s Tale (pictured below).

Brugel was the only Canadian cast member in Season 1 of the series and only seen occasionally. But in Season 2 she had become a series regular and has been part of the cast ever since. Discussing her role, and any similarities to her life beyond the cameras, Brugel was able to relate her personal experiences with racism to the mistreatment of the “Marthas” saing, in part, “I use it, not only in her position in the house as a Martha, but I very much lean on race, and like I said, past experiences in which I actually feel like I’ve been a slave in situations just because of my colour. I’ve never been physically abused in real life because of my race, but I most certainly have been verbally abused. Any sort of racial slurs that have felt like an actual hit or an impact to me, I can use in the show when someone says something that is hard and biting. I use that feeling in almost every scene because I feel like she’s punched in some way in almost every scene.” 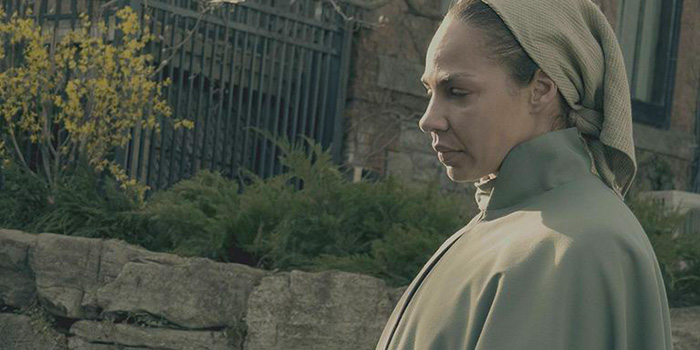 Tall, powerful, proud, Amanda Brugel continues in her role on Season 4 of The Handmaid’s Tale. She also has a continuing role in the series Kim’s Convenience, playing Pastor Nina Gomez since 2016. It was announced in early 2021 that the series would come to an end in April of that year.

Not limited to series or the small screen, some recent feature films projects include The Education of Fredrick Fitzell, Sugar Daddy and Becky.

This biography is Copyright © 2021 by Northernstars.ca and may not be reproduced without prior written permission. Click here for more about copyright.