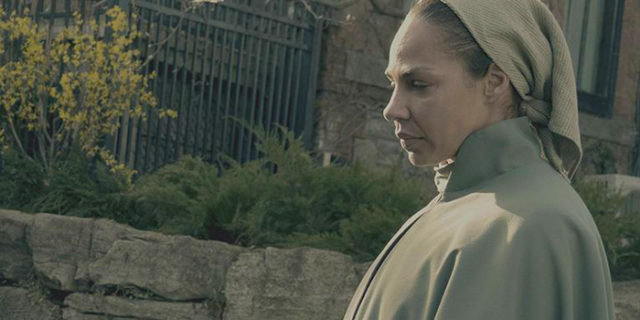 (May 23, 2018 – Toronto, ON) Although Margaret Atwood’s best-selling novel, The Handmaid’s Tale, hit bookstore shelves in 1985, the subsequent Emmy® award-winning drama series is more relevant than ever as it brings to life the horrors of destructive social constructs in a future that may be closer than imagined.

Amanda Brugel was the lone Canadian cast member in Season 1 of the series and only seen occasionally. In Season 2, currently airing Sunday nights at 9 p.m. ET/PT on Bravo, and available on CraveTV, her character, Rita, has become a series regular. Born in Pointe Claire, Brugel recently discussed the future of characters like hers, known as “Marthas” and how she hopes the second season will effect conversations of intersectional feminism and politics.

Developing the character of Rita, and how she continues to change:
I really, truly think that Rita has one of the biggest hearts. Because of the circumstances in which she lives, she has no real value. Handmaids, especially once handmaids are pregnant, they can sort of resist and they can stand up for themselves, but Marthas are replaceable within a minute. That’s why I feel like she is so quiet and so subtle because she’s afraid to say anything.

This season, you see her break that mold a little more, and show a little more of her true colours and who she was pre-Gilead. It’s also really interesting to see a person open up and remember who they were and relive the life that they had before. Reclaim some of that strength from the previous life.

About the responsibility to represent intersectional feminism:
I really try to feed it into everything about her. I would try to feed it into her physicality and the way she walks and the way she moves. It’s interesting because I watched a lot of movies on slavery, just to watch how certain characters move. The last film I watched was 12 Years a Slave. Lupita [Nyong’o] has incredible body language. You can watch it without sound and you can still see her story. That was one of the ones I watched over and over again.

I’m biracial, and I did a lot of writing on my own experiences of how I felt a different class at times, so I would add that into certain themes. Especially when there were scenes with less dialogue where I just had to communicate with a look. A lot of Rita’s scenes are her communicating with a look or a glance or one word. I would write a whole scene out with words and then I would try to infuse it into the one line, so physicality really is a part of that.

The Handmaid’s Tale becoming a part of a political and cultural discussion:
I’ve had a relationship with this book since I was 15. I wrote my thesis on it to get into university when I was 20, particularly on the character that I play. It’s always been a symbol of feminism for me. I feel the show has cracked open a discussion and a dialogue that has been a global movement. It’s scary at times because you feel a sense of responsibility to make sure that you maintain a clear map of where the discussion should go. You want to make sure you are keeping the discussion positive and moving forward. There’s a little more pressure than your average television show.

I don’t know if it’s changed anything, but I do feel it has helped to spark a dialogue. I feel like it’s given people permission to openly discuss equality, the use of women’s bodies, etc. I feel like people can use it as a warning and they see the possibilities of our own society going towards something along the lines of Gilead. So people use it as almost a cautionary tale. When you’re watching what your world could possibly look like, that affects people in a way where they now openly discuss it. I feel like it’s a symbol for inciting change.

What it means to have children in Gilead, and subsequently in today’s society:
I really truly feel humanity always prevails. I feel it’s always a question that we ask as people. What are we bringing our children up into? I think if you’re asking that question, it means that you want better life for your children. Hopefully you’ll teach them to survive in this world.

Gilead is a very different place. But I think the thing, especially in this season, that bonds a lot of the women, is that they do realize that Gilead is a danger. What bonds them is the idea that they want to come together as a collective to protect the next generation. They may put aside how they feel about Gilead or their allegiance to Gilead for the sake of protecting this child and making sure the child has the best life possible.

On relating her personal experiences with racism to the mistreatment of the Marthas:
I use it, not only in her position in the house as a Martha, but I very much lean on race, and like I said, past experiences in which I actually feel like I’ve been a slave in situations just because of my colour. I’ve never been physically abused in real life because of my race, but I most certainly have been verbally abused. Any sort of racial slurs that have felt like an actual hit or an impact to me, I can use in the show when someone says something that is hard and biting. I use that feeling in almost every scene because I feel like she’s punched in some way in almost every scene.

The new theme of female solidarity emerging in Season 2:
A big theme of Season 2 is female solidarity, and unlikely relationships, unlikely bonds that form. I don’t want to spill anything, but you think that there is a line in the sand, for certain characters, and that Rita for the most part keeps her head to the ground. She doesn’t want to get involved with the handmaids and doesn’t want to mix anything up. She just wants to do her job and that’s it. You see those lines start to be blurred and relationships start to form that you don’t think would happen. People that stand on opposite sides of the fence start to shift. Especially the female relationships, they come together in really interesting ways.