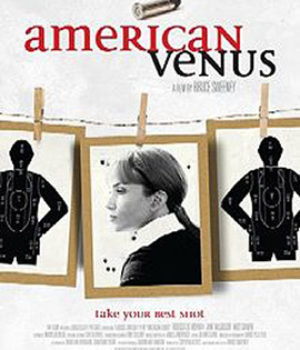 Watching a documentary on filmmaking a few years ago, one of the people being interviewed said something like, “films don’t want to get made.” He was talking about all the obstacles that are placed in the way of any film ever being completed. In the case of American Venus, the fourth feature from Bruce Sweeney, it was the director himself who, 18 months into writing the original script, decided to toss it out and start again from scratch. We’re glad he did.

American Venus is an almost classic thriller. The basic story centres around an Olympic hopeful who has decided to hang up her skates, and her mom-coach who can’t quite let go of both her daughter and a life built around years of Olympic competition. On top of all that she has a fascination with handguns and finds a form of solace at the indoor firing range. But she is, after all, American.

Rebecca De Mornay stars as mom, Celia Lane. We’ve all heard of overly possessive parents, well that`s Rebecca`s role and she plays her character to the hilt. But then she has played a string of slightly-off-centre characters throughout her career. Who can forget her role as the very twisted nanny in the 1992 film, The Hand That Rocks the Cradle? In this psychological drama you get the sense she`s actually enjoying herself and her character. Maybe she really does like guns.

The role of her daughter, Jenna, is played by Jane McGregor who shares a considerable amount of screen time with her film mom. The object of her mother`s unwanted and increasingly scary attention, Jenna bolts from her US home and heads north across the border to Vancouver where most of the story unfolds.

In the time-honoured tradition of past thrillers you’re never really sure what`s going to happen next. The path this film takes is carefully guided by a series of taut scenes as the camera constantly descends to reveal the next level of craziness as mom gets scarier and scarier.

Nicholas Lea has a solid role in this film as does Matt Craven who plays Jenna`s dad, but both roles are reduced to the basics. Lea`s character, which is more fully drafted, helps lend an air of sordidness to the journey De Mornay has embarked upon. Craven is mostly absent from the story which, like his character, was mostly absent from his daughter`s life. However there were times in the film where I wondered, where`s dad?

If I have any trouble with the film it is in its ending, but it is a minor complaint. Without giving it away, I felt a little cheated by the twist the story takes. But a few days after screening American Venus I thought about the ending again and realized that while it could have ended some other way, almost any other ending would have made the film predictable and the one thing you don’t want in a thriller is a predictable ending. In conversation with the director I was going to ask him if he had considered or even shot a different ending but in the course of our interview he had said something like “if you ever watch those deleted scenes of movies on a DVD, you know why they were deleted” so I’m fairly certain this is the ending Sweeney wanted us to see.

American Venus, despite its relatively small budget, has a big studio feel about it. It looks great, sounds great, and marks an important departure for its director. Sweeney has made only four films in 12 years. His style of filmmaking has been to come up with an idea and then through an almost endless series of improv sessions and rehearsals, write and rewrite until he arrives at the final script. This time out he wrote the script first. The result, while not quite nail-biting drama, is a terrific small-cast movie that is a highly entertaining story about obsession, compulsion, and misplaced love.

Ralph Lucas began reviewing movies when he worked in radio in the mid-1970s. He is the founder and publisher of Northernstars.ca