Home News Andria Wilson Inside Out 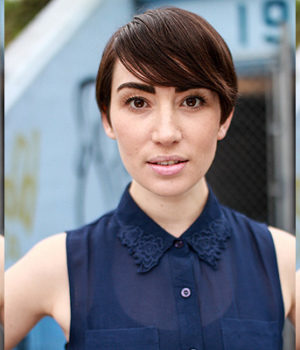 (October 27, 2016 – Toronto, ON) Andria Wilson has a remarkable history as a passionate arts administrator and a deep knowledge of what it’s like to work in the often difficult non-profit sector. These qualities and her previous experience has brought her from Halifax to Toronto to be the new Executive Director of Inside Out, the organization behind the Toronto and Ottawa LGBT Film Festivals.

Wilson spent the last 15 years in Halifax where she was an integral contributor to the arts and LGBTQ+ communities and co-founded OUTeast, Atlantic Canada’s Queer Film Festival in 2011. She will assume her new position on Monday, October 31, 2016, succeeding outgoing Executive Director Scott Ferguson, who guided the organization through 16 years of remarkable growth.

“After a rigorous search process that yielded a lot of interest, Andria impressed the Board with her winning combination of results-based experience and visionary leadership,” said Jason Wagar, Chair of Inside Out’s Board of Directors. “Her energy, talent, and passion will serve Inside Out and our audiences well as we build upon the organization’s success.”

As Executive Director, Wilson will set and implement a strategic vision for Inside Out that continues to build upon its mandate in presenting the best and most diverse films by and for LGBTQ communities.

“For more than 25 years, Inside Out has brought the world’s best achievements in queer cinema to audiences in Toronto and Ottawa, and has created opportunities for many Canadian filmmakers,” said Wilson. “I am beyond honoured and excited to join an organization that

I have long admired and to work alongside this amazing team. Stepping into such an established, healthy, and relevant organization is a privilege, and I am grateful to the leadership of Scott and the Board of Directors for making Inside Out everything it is today. As we look to the future, I see endless potential for Inside Out and its role locally, nationally, and internationally.”

Wilson was one of the co-founders at OUTeast, Atlantic Canada’s Queer Film Festival. She led the organization through five successful annual festivals. This year she also served as the Festival Producer of the TD Halifax Jazz Festival.

Wilson was the first Managing Producer for 2b theatre company, the largest exporter of theatre for adults east of Quebec, and the founder and producer of Left Foot First Productions. She managed cinema operations for the Atlantic Film Festival for 6 years and was the Artistic Director of the 2014 Creative Nova Scotia Awards.

In addition to the annual, internationally recognized Toronto LGBT Film Festival, Inside Out is committed to challenging attitudes and changing lives year-round through the exhibition, production and promotion of LGBT film with initiatives that include the Ottawa LGBT Film Festival, development programs featuring the newly launched BravoFACT Pitch Competition, New Visions and the Short to Feature Award, as well as the More Play Screening Series.