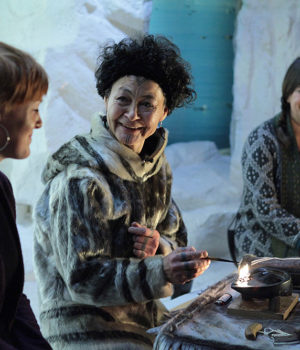 (August 19, 2016 – Toronto, ON) When the 17th annual imagineNATIVE Film + Media Arts Festival opens its doors on October 19th, filmgoers are in for a remarkable piece of filmmaking and perhaps an historically important film. Angry Inuk first screened at Hot Docs earlier this year but it is the perfect film for imagineNATIVE. Given the spirit of reconciliation and fairness our federal government is trying to achieve the story behind Angry Inuk needs to keep reaching an understanding audience, even if some may find the content and message unsettling.

Alethea Arnaquq-Baril’s Angry Inuk is an award-winning documentary that sheds a powerful light on anti–seal hunting campaigns and the relevance of the hunt to the lives of the Inuit. Long a vital source of food and income for the Inuit, the seal hunt has been disrupted by high profile, international campaigns fronted by celebrities and led by well-funded animal rights organizations. The ensuing bans on seal products have caused financial devastation to northern communities, creating what the filmmaker calls the Inuit Great Depression. Angry Inuk follows an emerging group of Inuit activists – armed with their own sense of humour and justice – as they insert themselves into the international discussion.

The closing night gala on Sunday, October 23 at TIFF Bell Lightbox will be the North American premiere of Bonfire, the debut work by Dmitry Davidov, a rising Yakut filmmaker from Russia. Deep in the Sakha Republic in eastern Siberia, Ignat is a hard-working widower who keeps to himself and tries to do the right thing. After a tragic accident involving his son, Ignat finds an unlikely friendship with a local boy. Bonfire is a dramatic feature that displays a tender, tactile portrait of the complexities of family and the fragility of life.

More programming for the 17th Annual imagineNATIVE Film + Media Arts Festival will be announced in the coming weeks. imagineNATIVE’s Early Bird Ticket Packages and Delegate Pass are on sale now.