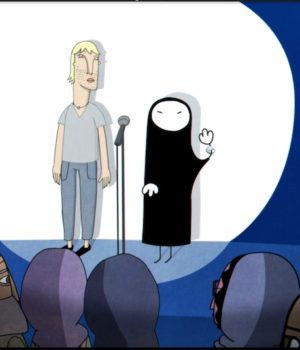 (March 10, 2017 – Vancouver, BC) Delight ensues the moment Ann Marie Fleming opens the door to her bright blue house in East Vancouver. She pours rooibos tea in her intimate, spice scented kitchen and talks about her love of cooking before we settle in to her art filled living room, the light softened by cabernet velvet drapes. Pink tulips spill out over a glass vase on the coffee table. She cups her hand on the face of her grandmother, a lovingly restored porcelain bust, proudly displayed on the mantle.

Taking a break from appearances at international film festivals, Fleming is as exuberant and entrancing as her award winning feature animation, Window Horses, the Poetic Persian Epiphany of Rosie Ming.

“It’s a love letter to art and the possibilities of the imagination,” she says of the film that follows the adventures of a stick girl (Rosie Ming, voiced by Sandra Oh) as she is invited to a poetry festival in Iran. The premise sounds abstract, almost to the point of absurd, but it works. Fleming first began drawing Stick Girl in art school and she has appeared in several of her films and as the protagonist of a graphic novel.

Diverse animation styles from several guest artists, including Janet Perlman, Bahram Javaheri and Jodi Kramer make create a lush visual experience. Iranian actors also lend their voices to the project, Shohreh Aghdashloo (House of Sand and Fog) as Mehrnaz, a professor at the University of Tehran and Rosie’s guide in Shiraz and Payman Maadi (a Separation) reading Rumi. Canadians Don McKellar as the defensive but relatable young German poet and Ellen Page as Rosie’s confidant add to the charm.
As xenophobia and patriarchy have commandeered global politics, Fleming says it’s even more urgent and necessary to put forth stories that generate understanding and connections. “I really think that art is a healing force,” she says. “It’s hard to be human so I guess we have to forgive ourselves, which means forgiving everybody else.”

Before the film was in production, Fleming says having Oh speak so passionately about the project created an opportunity to talk about women’s issues and art, without all the hubbub of trying to get attention at a film festival.

“We were talking about diversity and poetry and art and girl power. We got to talk about all the things in the film with no film,” she says. “The poetry is my experience as a film maker with my 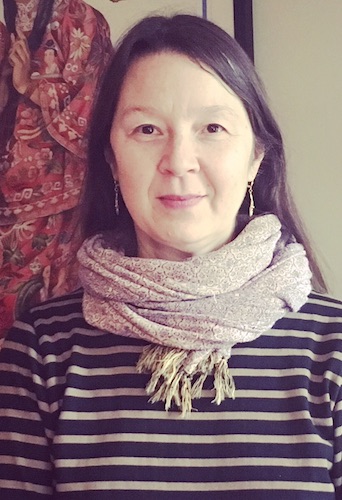 The classic book of poetry Horses Make A Landscape Look More Beautiful by Alice Walker inspired part of the title. “I loved that title, it’s so evocative. I wanted to mention other schools of poetry, not just the ones I was presenting as characters and of course Persian poets,” she explains. In addition to her schooling in animation from Emily Carr, she also holds a degree in English literature.

“This film has the highest profile of anything I’ve ever made and it’s talking about poetry and love. Not romantic love. It’s talking about human beings and how we’re all connected and it’s presented by a stick figure wearing a chador. The great thing about Rosie is that she is so totally herself, she can ask the stupid questions and people are just nice to her. They’re trying to open her world. Maybe if we were all that vulnerable that could happen more often. But it’s really hard to make yourself vulnerable.”

For Fleming, serendipity is a constant in her life. While casting for the film (she did all casting by phone so as not to be distracted by appearances) she reached out to her aunt in Honolulu, asking if she might convince Nancy Kwan, who plays Rosie’s grandmother Gloria, to perform in the film. Not only did she agree, but Fleming discovered her grandmother in the UK had babysat Kwan when she was a young girl abandoned by her mother. As she recounts the story, her voice rises with the excitement of discovery.

“All my films are about relationships. I get into them because I’m interested in something that has been introduced by somebody in my life,” she explains. “As an artist, it’s what calls you, it’s what you’re compelled to do. It’s the thing you can’t put down. I tried to put this down many times over the last 20 years but I kept picking it up again because it’s something that I needed to do. I find it hard to do, but I find it impossible to stop.”

Even though the concept felt right intuitively, she admits to some trepidation about the setting and in the early stages of seeking funding for the project, she was advised to move the story to China instead. Fleming was born in Japan and her parents are Chinese and Australian. “It’s so interesting as North Americans, we’re all immigrants here except for First Nations people. When it comes to talking about other cultures we’re always talking about appropriation. I was very nervous about doing something that takes place in Iran. Iran is such a deep, well-represented culture for millennia,” she says. Yet she is no stranger to sensitive subject matter, as indicated in her 2010 project I Was the Child of Holocaust Survivors.

An hour passes in a heartbeat, and Fleming is late for a panel discussion on women in media at UBC. A Syrian family exits from the downstairs suite as we prepare to leave. She signed up to host as soon as the Trudeau government streamlined the process of welcoming refugees. “I just want to walk the talk,” she says.

Window Horses opens today, March 10 in Toronto and Vancouver; March 17 in Montreal and March 21 in Ottawa.