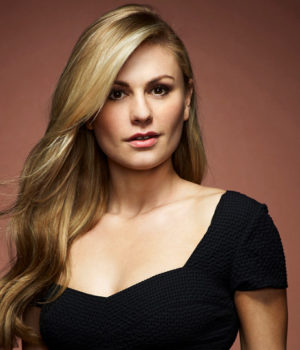 (August 16, 2016 – Toronto, ON) Production partners Halfire Entertainment, CBC and Netflix announced today that Academy Award-winning Canadian-born actress Anna Paquin (True Blood, Roots) has signed on to play Nancy Montgomery in the screen adaptation of Margaret Atwood’s Alias Grace. The six-hour mini-series is inspired by the true story of Grace Marks, who was convicted of murdering Nancy Montgomery and Thomas Kinnear. Written and produced by Sarah Polley (Take This Waltz, Away from Her) and directed by Mary Harron (American Psycho, I Shot Andy Warhol), the mini-series began shooting in Ontario yesterday. Alias Grace will be broadcast in Canada on CBC and globally – everywhere outside of Canada – on Netflix.

Alias Grace follows Grace Marks (Sarah Gadon) a poor, young Irish immigrant and domestic servant in Upper Canada who, along with stable hand James McDermott, was convicted of the brutal murders of their employer, Thomas Kinnear and Nancy Montgomery (Anna Paquin) in 1843. Nancy is Kinnear’s housekeeper and lover, and while she initially befriends Grace, she begins to resent Grace and becomes increasingly jealous of Kinnear’s affection for her. Nancy eventually fires Grace in a fit of rage and is later found brutally murdered.

“Anna is an incredibly versatile performer who always makes complex, unpredictable and fascinating choices in her work,” said Sarah Polley, Executive Producer. “It’s always a marvel to watch her and we’re thrilled to have her join the cast.”

Alias Grace is co-commissioned by CBC and Netflix, produced by Halfire Entertainment and created by Sarah Polley. The executive producers are Sarah Polley, Mary Harron and Noreen Halpern. Producing alongside Polley is D.J. Carson.