Another Win for Denis Côté
by Maurie Alioff – Quebec Correspondent

(March 23, 2021 – Montréal, Québec) An award-winning presence on the international film festival scene for years, Denis Côté was named Best Director in the Encounters section of this year’s Berlinale. Côté’s latest, Social Hygiene, which premiered at the Berlin Fest, is in the line of his minimalist, quietly provocative films telling off-centre stories about marginalized people who often live in marginalized places. I doubt that Côté would ever shoot a scene in a sleek Montreal restaurant, or gawk over pristinely beautiful Quebec locales. When Côté, a diehard city dweller, goes country, he depicts a world of motels, bars and junkyards set in an austere, lonesome hinterland.

Bestiaire consists almost entirely of long takes of animals in a Quebec zoo. No words, no music. You stare at the beasts, and they stare back at you. Côté doesn’t avoid the fact that he was on the edge of exploitation with Carcasses. A no-bullshit, anarchistic spirit, he even wisecracks about some of the festivals that venerate him. “It’s the art that matters,” he once told me, “You sometimes feel that you could film a toilet bowel, and they would take it.” 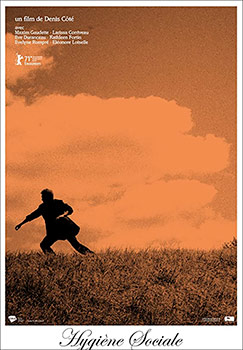 Côté’s latest Berlin prize-winner, Social Hygiene, features Maxim Gaudette, (the mass-murderer in Denis Villeneuve’s Polytechnique) as a young intellectual snagged in volatile relationships with his wife and two other women. They push him to settle down and plant his feet on the ground. He’d rather sleep in cars and stick up tourists.

Because of the picture’s title and scenes in which characters yell at each other from what seems like social distance, viewers surmised that Social Hygiene was intended to be some kind of wry comment on the Plague Year. But in fact, Côté developed the idea and wrote the script well before the virus. “I admit that it’s very pandemic-approved,” Côté joked to The Hollywood Reporter.

A mentor to writer-director Matthew Rankin (The Twentieth Century) and friend of Denis Villeneuve and Xavier Dolan, Côté is more than aware of opportunities beyond the bubble he lives and works in. But apart from a medical condition, Côté’s impulses guide him away from Hollywood, not toward it. “I see films like [Villeneuve’s] Arrival,” he told a reporter, “and I am not jealous. I am just completely outside that. I guess that I am just this cinephile guy who wants to experiment, and Hollywood is not my playground.”

Watch the trailer and learn more about the cast & crew of Social Hygiene.

Maurie Alioff is a film journalist, critic, screenwriter and media columnist. He has written for radio and television and taught screenwriting at Montreal’s Vanier College. A former editor for Cinema Canada and Take One, as well as other magazines, he is affiliated with the Quebec media industry publication, CTVM.Info. His articles have appeared in various publications, including Canadian Cinematographer, POV Magazine, and The New York Times. He is the Québec Correspondent for Northernstars.ca.