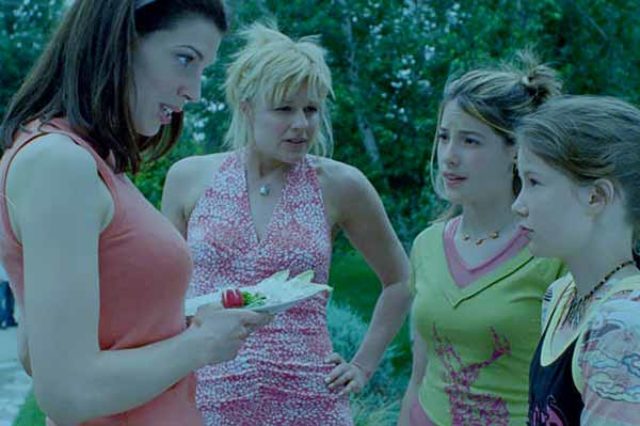 The Ties that Bind: Louise Archambault and Familia
By Wyndham Wise

Québec newcomer Louise Archambault worked as a line producer on commercials, unit director and stills photographer before turning to her own film projects. Atomic saké won the Prix Jutra for best short in 2000 and was screened at festivals worldwide. Now her debut feature, Familia, has been chosen to open the Canada First! program at the Toronto International Film Festival and is set for theatrical release in her home province in September.

Familia, an assured contemporary family drama shot by ace cinematographer André Turpin (Maelström and Un Crabe dans la tête, which he also directed), explores the question of how value systems are passed on from mother to daughter and asks: Is it possible to avoid passing on to our children those traits that we despise in our parents? Michele (Sylvie Moreau), a 30–something aerobics instructor addicted to on–line gambling, loses her job and is forced to seek refuge with a childhood friend, Janine (Macha Grenon), who lives in a 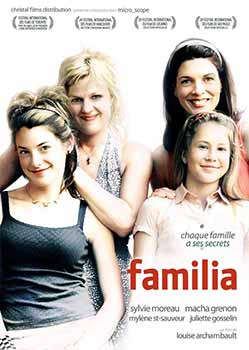 I spoke to Louise Archambault just prior to the TIFF press conference in Toronto in August.

Tell me a bit about your background in film.

In Quebec we have CEGEP, which is a link between high school and university. We have three years of transition, and that’s where you get a chance to orientate your career. When I was in high school I thought about medical school, but when I was about 16, communications and art became a large part of my life. I love to draw, and at one point I said I wanted to go into advertising because that’s what I knew about. So in CEGEP I did studies in communications and that is where I started to make films in Super 8. At one point we were shown Mauvais sang and that film just blew me away. Then we saw Breathless and a lot 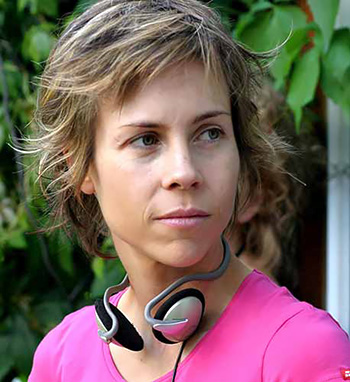 of the French new wave, but it was Mauvais sang with Juliette Binoche that inspired me, and I said I wanted to make films to express myself, to express my emotions and themes. Years later I saw the film again, and it didn’t blow me away, but at that time, at that age, it was the film that got me going.

Then I went to Concordia University for three years and I did courses in film production. I wanted to do a master’s degree, but I started to work in television and commercials instead and I got the opportunity to produce them. It’s easier for a woman to be a line producer on commercials then a director. I looked young, and I was young—24. The company I worked for loved me, but they couldn’t sell me as a director. I looked like a kid, so being a line producer was fine by me. It was fun, and I thought I would like to be producer. When you are making or writing films, there is a lot of compromise and people involved. I thought being a producer I could be creative but not be personally hurt by the compromises.

I joined Max Films, Roger Frappier’s company, and began work on 2 secondes, the film by Manon Briand. I was happy to do that, but I wanted to work on my own films, so I began work on my master’s at Concordia. It wasn’t just film studies, but the other arts as well, and I became interested in photography, especially black and white. There I wrote Atomic saké and when I graduated, I found a producer and made the film.

You had some success with that film.

It was shown at a lot of festivals, maybe 100, I don’t know, and it got a Prix Jutra for best short.

After Atomic saké you made a couple more shorts and then moved on to Familia.

Before shooting Atomic saké I had a synopsis for a feature, and then I got some development money from SODEC in 2000. It took me a while because I had a child and made another short called Mensonges for Radio–Canada. Then we got funding for Familia at the end of 2003. But it is a summer film, so I had to wait for the summer of 2004 to shoot it and it took me a long time to complete it. Actually, I just finished it now, last week.

What are the origins of that film? Is it based on your family?

Of course, it’s very personal, but it’s not based on my family. Actually, they haven’t seen it yet.

How would you describe Michele, your lead character in Familia?

Well, she is very open but not attached to material things. She’s attached to humans. That’s what I like about her. She might be fucked up, but she cares about her daughter. The other family, the one represented by Janine, they are well placed, but they don’t have the same connection. They never learned that touch. I was not so much interested in the theme of family, but in the difficulty of humans to connect. What interests me more is people, the way we are. I like to take characters and turn them around to see all the different sides. I wanted to focus on the lack of communication, such as when you talk too much or when you don’t talk enough, what makes relationships difficult, and of course relationships have a lot to do with family and friends. 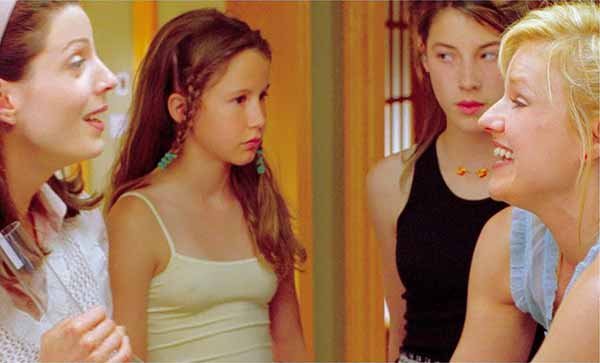 I started with that premise, and then I had my two women and their two daughters. They were friends when they were teenagers and some point in their life they separated, but they still have something that connects them. The one that lives in the city, Michele, had her daughter with Janine’s brother, when they had an affair. I like to develop those patterns between generations, how we inherit the patterns of behaviour from our parents, even though we don’t want them. Actually, the film is more about the relationship between the daughters than the two women. It’s about the generations, which is why I put the three generations in the film. Micheline Lanctôt plays the mother of Michele. For a long time I have been fascinated with memory, what is true and what is false.

Tell me about the shoot. Was it difficult or did it go smoothly?

It was a 28–day shoot, with a small budget—$1.8 million—but I had worked with the people before. André [Turpin] had shot Atomic saké, and I had worked on his films. I had worked with the art director before. We help each other out. It’s art, that’s the way it works. The limitations I had were money and time, and that was frustrating, not being able to control the design or the physical making of the film. The only thing I could control was the writing and what I wanted to say. We did a lot of rehearsals and I concentrated on the performances. I said, “Too bad how it looks. At least if I believe in the characters then I did my job properly.”

I wanted the summer to be very hot, like it is this year. I wanted the sweat, the skin that shines, but it was cold and raining in 2004. This year it would have been perfect. I wanted the flares off the lens but there was no sun. But it was a smooth shoot, no real problems. Juliette had to kiss a boy, and it was the first time she kissed a boy in her life. That was special. It was very sweet. There was a virus going around the crew, and one day, a very difficult shooting day, I was sick as a dog, and I had to go on the set. People were putting ice packs on my head. I couldn’t deal with actors, but I did it 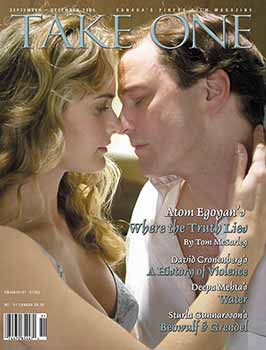 anyway. I like to do as many takes as I can, within the limits of the budget, and 90 per cent of the time in the editing I will choose the last take. That was a difficult day. I must say I’m not that happy with the look of the film. We had a lot of difficulty in finishing it in post, and I don’t like the texture. It looks very grainy.

What’s next for you?

I go to Locarno for the festival after this. Familia got selected for the international competition and there will be an audience of 3,000 people watching the film. It will be awesome. They only select 18 films from 1,200 submissions. And of course, I’m very happy to be in Toronto, it’s a great festival. The film is being released in Quebec and New Brunswick in the fall, on a small circuit. Right now Quebec films are doing very well, and people go to see them. I don’t know about the rest of Canada. That’s a problem. I have another script I am working on, and the whole month of October I am going to Belgium. I am working as the still photographer on a film [Congorama] by Philippe Falardeau, who directed La Moitié gauche du frigo, and he is finishing it in Belgium. I have other things I want to do, but I’m not committed to doing things by some pre–arranged schedule, like some people who want to make their first film before they are 30. I do have things I want to say in film, and that’s the way it starts for me.

This interview originally appeared in issue 51 of Take One Magazine in September, 2005 and was written Wyndham Wise when he was the publisher and editor-in-chief of Take One: Film in Canada. Currently, he is an occasional contributor with Northernstars.ca. Northernstars.ca acquired the digital archives of Take One in 2007.