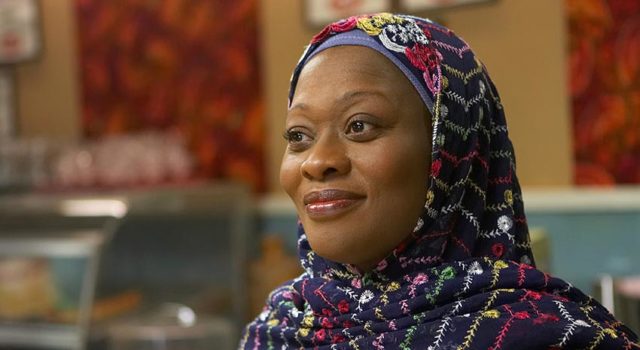 Arlene Duncan was born and grew up in Oakville, Ontario, west of Toronto. Her father, Alvin B. Aberdeen Duncan, was a decorated Royal Canadian Air Force (RCAF) veteran of the Second World War and a man who could trace his roots to the days of the Underground Railroad. Her mother was from Jamaica.

Best known for her role as Fatima Dinssa (pictured above), the rather conservative owner of the café in 91 episodes of Little Mosque on the Prairie (2007-2012), Duncan’s career has taken her around the world: through Europe, the United States, across Canada, as far north as the Arctic and as far south as New Zealand.

Duncan has appeared in numerous notable film and television projects including the role of Harriet Tubman, the American abolitionist, humanitarian, and an armed scout and spy for the United States Army during the American Civil War. She first played the role on stage and then reprised the part for Sing Out Freedom Train, which was nominated for a Gemini Award.
Other stage credits include Sophisticated Ladies, Once on this Island, Jacob Two Two and the Hooded Fang and the Dora Award-winning productions of Ain’t Misbehavin’, The Nutmeg Princess, and The Who’s Tommy. in 2012, Duncan won the Dora Award and Toronto Theatre Critics Award for best actress in a musical for her performance in Caroline or Change. More recent theatre credits include Once on the Island (2014), Recurring John (2014) and Up the Garden Path (2016).

On the small screen, Duncan is known for her recurring roles on programs like the Showtime series Soul Food, the CBC series Drop the Beat and the internationally-acclaimed CTV series Degrassi. Duncan received an ACTRA Award nomination for her performance in the CBC television special All For One. Recent series credits include appearances on Remedy and Suits in 2015 and on Private Eyes in 2016.

On the musical front, Duncan was a winner and later the co-host of the DuMaurier Search for Stars, and was awarded Female Vocalist of the Year at the Canadian Black Music Awards. She was named BLAC Female Vocalist of the Year in 1994 and is a Hall of Fame Award Winner for Dance/House music. She was given the Artistic Merit Award representing Canada as a vocalist at the Pacific Song Festival in New Zealand and later co-hosted the show live via satellite to eight countries along the Pacific Rim.

Other than singing, her voice has been used on such diverse productions as playing Betty Parker in the CBC radio mystery series The Old Guy and as the voice of Officer Rabbit in the cartoon Franklin the Turtle.

She has received the Four Pillars Award from the Canadian Caribbean Association of Halton and the African Canadian Achievement Award for her contributions to the arts. The actress, singer and songwriter has also served as an honorary chair of Literature for Life.

This biography is copyright © 2017 by Northernstars.ca and may not be reproduced without prior written approval. Click here for more about copyright.