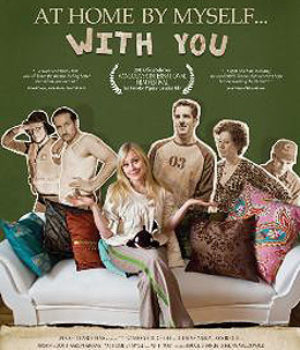 At Home By Myself… With You
Review by Glen Russell

At Home By Myself….With You had its World Premiere before a large, standing-room only house at the 2009 Vancouver International Film Festival. This was director Kris Booth’s feature film debut and a crowning glory for his Pocket Change Films. I watched people filling out their ballots for the Roger’s Peoples Choice award thinking this film is a worthy candidate for best Canadian Feature film, the CanWest Award. Booth told us the next day the film was a last minute pick for the festival and was completed just a few days before it screened.

At Home’s story behind the story is the same for a number of the Canadian, indie films in the Festival’s Canadian line up. In the Q&A that followewd the screening Booth said, quite humbly, that his film and production company, Pocket Full of Change, is the ‘little guy’ of the indie world facing the Atom Egoyans and Carl Bessais of the 35mm world.

The next day we had one-on-one time. I asked about the numbers. He laughed and sighed in mock irony: My kingdom for a budget. This is the indie film world he lives in. I really wanted to hear more about what I saw and enjoyed. I heard an amazing story about the collective effort of a number of professional, dedicated people who worked on and/or supported this film production.

Gordon Pinsent, a Canadian Superstar, is one of those supporters. As narrator he opens the film showing us the exaggerated circumstances of Romy Scott’s (Kristin Booth) life before her big decision. In a mock documentary format, he introduces the death and pain that followed Romy around after a bizarre list of circumstances. The audience roared watching her problems with lobsters, kissing, and opening boxes. Her hilarious fears form the movie’s comedic premise.

There is a wisdom shining from this premise almost immediately. It’s not just a film about Romy-like fears, exaggerated and funny. It is about her strategies for dealing with these fears. We all have strategies. It is the stuff of life. Many times, we all feel like Romy wanting to escape from a falling sky. She withdraws at age 30 to her apartment, sometimes under the bed, comforted. She creates a ‘safe life’ there, building a successful travel service over the phone, vowing never to go outside again. Her agoraphobia is supported by an ensemble of characters that come to her door. This cast of current Canadian Stars provide the film’s best moments.

At Romy’s door, memorable characters deliver a delicious ‘back and forth’ affect of sharp, quick lines from Kris Booth’s and Romona’s Barckert’s script. Booth told me about studying the early seasons of Moonlighting. He wanted the same ping-pong exchanges like Bruce and Cybil, ending with two door slams not one.

Booth’s comic sense of timing is captured by the camera work of Mark Bochsler in HD. No easy task in the narrow confines of the Scarborough apartment, and limited resources. He makes it the highest film quality with his skills–while the director’s ‘obvious comic’ training helps him block, and pace each scene. I asked about his ‘obvious’ grounding, asked where it came from? His simple, egoless response: “I had intelligent actors.”

His deferral demonstrates the beautiful collaborative effort of every member of the cast and crew in this successful film. Romy Scott (Kristen Booth), who appears in just about every scene, showed why she has already won a Genie and Gemini. She is one of the rising Canadian stars in this movie ready for Super Stardom. Aaron Abrams plays the Guy across the hall who disrupts Romy`s life challenging her strategies and decisions. He is the writer, producer, and star with Kristen in the award winning Young People F*cking. He appears in Flash of Genius with Greg Kinnear and Alan Alda. His intelligence and intensity show in his necessary, edgy confrontations with Romy. He is life knocking on her door, challenging her life-crippling choices.

Romy is supported the film by a cast of outstanding characters coming to and through her door. Rosemary Dunsmore as Bessie, a flakey senior lost on memory lane, is exquisite. Raouel Bhaneja is the lecherous maintenance man reminiscent of an Elden, or Art Carney with his own originality–butt crack and all. Shauna Macdonald, Romy’s friend Erin and Ryan Blakely, the UPS man, deliver comic performances of stand-alone quality.

At Home By Myself….With You created such an impact, and ticket demand was so high, VIFF organizers added an additional screening of the film. A very auspicious start for a new Canadian film.

Glen Russell is a freelance writer and occasional contributor to Northernstars.ca. He is based on Vancouver Island.

At Home By Myself… With You