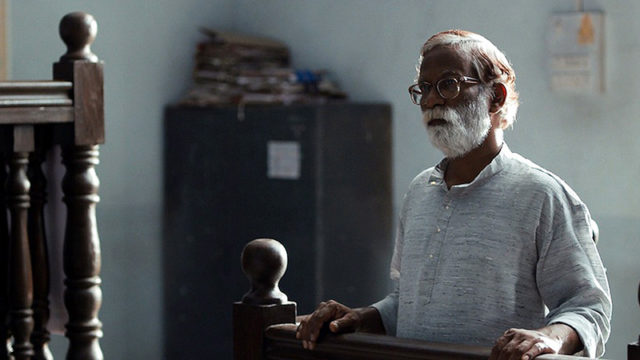 (July 20, 2015 – Mississauga, ON) The 9th annual Mosaic International South Asian Film Festival (MISAFF) kicks off in Mississauga, west of Toronto on Thursday, August 6 with a showcase of critically acclaimed shorts, features and documentaries celebrating the cinema of South Asia, the Middle East and the diaspora.

Founded by Arshad Mahmood and Asma Mahmood in 2006 as the film program of the TD Mosaic Festival, MISAFF evolved in 2012 with Arshad Khan and Anya Mckenzie at the forefront. MISAFF now features the best of new South Asian and select Middle Eastern film titles for Mississauga and region as well as Toronto cinephiles. The festival features ground-breaking and award-winning films, carefully curated for their cinematic excellence and social consciousness, for an audience that loves cinema irrespective of language or culture. The opening gala is a perfect example.

It is Chaitanya Tamhane’s award-winning directorial debut, Court. A winner of top prizes at both the Venice and Mumbai film festivals, Court is a quietly devastating, absurdist portrait of injustice, caste prejudice, and venal politics in contemporary India. It has stirred controversy in India where it was a box office hit, and has won both critical and audience acclaim. The director will present the Ontario Premiere of Court at MISAFF on Thursday, August 6 and be available after the screening for a Q+A.

“We are so excited that Court is the Opening Gala at MISAFF15,” said festival Director Arshad Khan. “It’s the perfect opening night film for MISAFF15 as it reflects the festival’s founding aspirations to bring to Mississauga and GTA audiences not only the best SA contemporary cinema but also the most intriguing and sometimes challenging work.”

MISAFF Co-Director Anya McKenzie said, “We’re so proud to be able to showcase not only the best of South Asian and select Middle Eastern contemporary work, but to also introduce our audiences to Canadian cinema and talent, many who will be in attendance at MISAFF15.”

In addition to Tamhane attending on Opening Night, the festival will also play host to actor Vipin Sharma in 2 films at MISAFF15: Gour Hari Dastaan and Dhanak (Rainbow). The Indian director of Dhanak, Nagesh Kukunoor will also be in attendance as will UK director Atul Malhotra for Amar and Akbar and Tony. There will also be Q+As with directors Lalita Krishna (Listen to Me) and Hoda Elatawi (Muneeza In The Middle).

MISAFF has also established itself as a landmark film festival showcasing South Asian Canadian talent. Canadian film artists Ali Kazimi, Sami Khan, Angad Bhalla, Amar Wala, Anita Majumdar, Raymond Ablack, Gabe Grey, Shireen Pasha and Richie Mehta along with international filmmakers like Rajat Kapoor and Mazhar Zaidi are some of the people who have been involved in the festival over the years.

Canadian Film of the Day: September 8