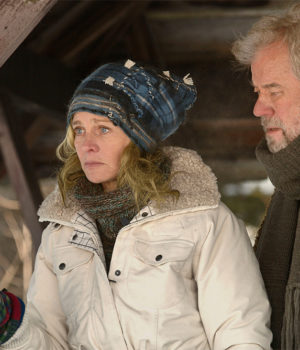 Away From Her
Review by Wyndham Wise

Sarah Polley’s debut feature, Away from Her, is a triumph in more ways than one. It’s an extraordinarily assured film for a first-time director, and it’s a welcome return to the screen of an iconic actress who is indelibly etched in filmgoers’ minds in such films as Darling, McCabe and Mrs Miller, Shampoo and Dr Zhivago. It’s also a triumph for Canadian filmmaking and all those who desire a film that actually lives up to its extravagant critical praise.

Ever since its world premiere at the 2006 Toronto International Film Festival, Away from Her has attracted the attention of critics and filmgoers like no other Canadian film in recent memory. Based on the short story “The Bear Came over the Mountain” by Alice Munro, it concerns the lives of Fiona (Julie Christie) and Grant Andersson (Gordon Pinsent), an elderly couple who are coping with the fact that she is drifting away from him due to Alzheimer`s. When it becomes obvious that the disease has progressed to the point that she needs 24-hour care, Grant makes the painful decision to place her in a home.

The rules of the home require that Grant be away from her for a month so that she might adapt to her new surroundings. When he is allowed to visit, he discovers that Fiona has forgotten about him and has become romantically attached to Aubrey (Michael Murphy), a wheelchair-bound elderly patient. At first Grant suspects that Fiona is doing this deliberately as payback for his former indiscretions, but soon he learns that this is not the case and 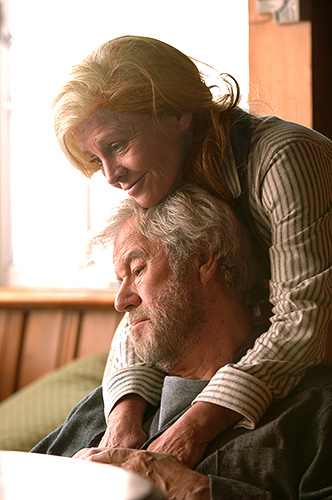 Fiona is now lost to him. He can only watch from a distance as his life-long companion sinks deeper into the depths of a disease for which there is no cure.

Over time, Grant becomes friendly with a sympathetic nurse (Kristen Thomson) and Aubrey’s wife, Marian (Olympia Dukakis), and is torn when Aubrey is removed from the home by Marian, leaving Fiona to sink further into a depression that saps her of the will to live. He must make a painful decision and an extraordinary act of self-sacrifice as means of attaining his wife’s final happiness.

Away from Her is blessed with an excellent ensemble cast, led by the still radiant Christie, who rarely appears on the screen anymore, but was attracted to the script and passion of commitment that Polley brings to the film. Pinsent is equally superb as her husband. His moments of quiet suffering are etched on his face without him having to say a word. Murphy and Dukakis bring dignity to their respective roles, while Thomson is marvelous as the salt-of-earth empathetic nurse and Wendy Crewson completes the picture as the no-nonsense head of the home.

But the real triumph here belongs to Polley, the adorable Sara Stanley from The Road to Avonlea, who, over the years, and a number of short, award-winning films, has matured into a major talent behind the camera. She had the smarts to surround herself with not only an excellent cast but also a very talented crew. Cinematographer Luc Montpellier, editor David Wharnsby and production designer Kathleen Climie all combine to give the film a professional gloss rarely found in first-time features. And there was executive producer Atom Egoyan on board, who Polley could turn to when help was needed.

Away from Her is well deserving of all the praise that has been heaped on it and marks a giant step in a very promising career behind the camera for a talented and committed director.

Also see: The Cast and Crew of Away From Her

Wyndham Wise is the former publisher and editor-in-chief of Take One: Film in Canada. Visit wyndhamsfilmguide.ca. Images courtesy of Mongrel Media.