Are the forces of another dimension working in Dan Aykroyd’s favour? He has gone from the son of the deputy minister of transportation to comic actor to Oscar® nominee without missing a step. In fact, he seemed to skip along the way.

Daniel Edward Aykroyd was born on Canada Day 1952. He grew up in Ottawa and attended Carleton University. Studying a combination of psychology, criminal sociology and political science paid off. His film career easily spans all three disciplines and then some.

Aykroyd began his career producing, co-writing and acting in a series of 15-minute comedy shows for a private cable company while still in university. Finding these shows to be a little more interesting to him than his course load, he decided to devote himself to the entertainment industry. In 1972, he joined the famed comedy ensemble Second City and worked both in the Chicago and Toronto clubs. Also in 1972, Aykroyd co-wrote and starred in his first feature, the low-budget Canadian comedy Love at First Sight.

In 1975 he joined the inaugural year of Saturday Night Live. He is pictured on the right in one of his classic characters as the host of a poetry-reading session. He learned his craft with performers who are now considered legends of comedy – John Belushi, Gilda Radner, Eddie Murphy, Bill Murray and Chevy Chase. He left SNL in 1979 but carried 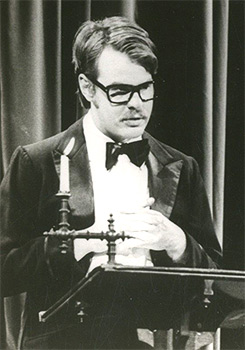 with him some important connections. He and Belushi recorded Briefcase Full of Blues in 1979, and in 1980 a film version of The Blues Brothers was released. Studio executives were unsure of its ability to pull in an audience; it was a limited box-office success, which over time grew into a cult classic. The Blues Brothers made Aykroyd and Belushi into icons of the early 1980s. In addition to starring in the film, Aykroyd wrote, produced and executive produced the soundtrack. Spin-offs included the release of a second album (Made in America), a chain of restaurants called The House of Blues and a sequel to the original film. Blues Brothers 2000, released in 1998, picked up where the previous film left off. Due to the death of John Belushi in 1982, the film dealt with the missing brother and brought new characters into the cast, including John Goodman.

It’s apparent from his list of credits that Aykroyd is a very hard worker. He has been in so many movies that it would be arduous to list them all. Small parts in Indiana Jones and the Temple of 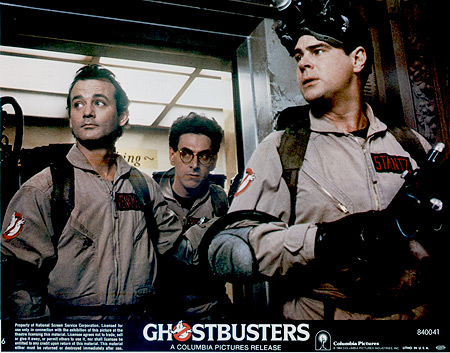 Doom (1984), She’s Having a Baby (1988) and Masters of Menace (1990) are complemented by larger roles in other films. He played the straight man to Eddie Murphy in Trading Places in 1983, a comedy about role-reversal. In 1984, Ghostbusters gave him a chance to delve into a topic that is of great interest to him and his ancestors: the paranormal. His great-grandfather corresponded with Sir Arthur Conan Doyle, his grandfather held seances in the family home and his father was also an avid follower of the paranormal. Writing and starring in Ghostbusters seemed like a natural. A huge hit, a sequel was made in 1989 and an animated series, The Real Ghostbusters, ran from 1986 to 1991. For years there were rumours that another film in the Ghostbusters franchise would be made. It turned out to be quite a long wait.

Aykroyd is well matched when it comes to the company he keeps in his films. He teamed-up with SNL alumni Chevy Chase and Bill Murray in Spies Like Us in 1985. In 1988 he joined John Candy for The Great Outdoors. The Couch Trip included his wife, Donna Dixon, and Caddyshack II reunited him with Bill Murray. Still leaning toward the odd, he costarred with Kim Basinger in My Stepmother is an Alien (pictured below), another one of the five films he was in released in 1998.

In 1989, Aykroyd was cast in a dramatic role as Jessica Tandy’s son in Driving Miss Daisy (pictured above with Morgan Freeman). His performance earned him an 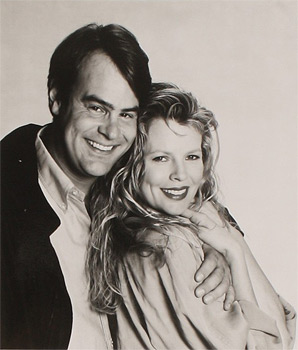 Oscar® nomination for for Best Supporting Actor. If nothing else, stepping outside his normal comfort area proved his talent did not rest entirely on the comedic side. Another dramatic role surfaced for him in My Girl (1991), starring opposite Jamie Lee Curtis. Aykroyd received critical praise for his performance as a single father mortician tryingto raise a daughter. His reprised the role in My Girl II in 1994.

Although he only had a small part in Tommy Boy (1995), Aykroyd had the opportunity to work with Chris Farley, John Belushi`s successor, according to the media. He kept busy by taking parts in two low-impact films in 1996, Sgt. Bilko and Celtic Pride.

At the same time he started working on Psi Factor: Chronicles of the Paranormal (1996–2000). The show focused on the work of authentic paranormal activity, as investigated by the Office of Scientific Research and Investigation. Aykroyd acted as host of the show, which had an early Twilight Zone feel to it. Filmed in Toronto, he was able to live closer to his home in Kingston, Ontario.

Next in line for Aykroyd was the made-for-television movie The Arrow in 1997. It was based on the true story of the development of one of the most advanced jetfighters of its era, and how a variety of problems led to the cancellation of the project. The story of the Avro Arrow had reached mythic proportions in Canada, and as a result The Arrow reached a broad national audience. His second role in 1997 was in Grosse Pointe Blank. He played a rival assassin opposite John Cusack and turned in a first-rate performance with his great comedic timing.

In 1998, Aykroyd got a chance to stretch his vocal talents when the producers behind Antz called to say they wanted to use him in the animated feature. Hardly stopping to catch his breath, Aykroyd signed on for The House of Mirth. Shot in Glasgow, he starred opposite the X-Files‘ paranormal queen, Gillian Anderson. Two important milestones for him came in 2001. He co-starred in Curse of the Jade Scorpion and he announced his intention to retire from acting. Curse of the Jade Scorpion was a bit of a disappointment for movie-goers and fans of writer/director/actor Woody Allen. Although Aykroyd carried his role well, the movie didn’t achieve anything new for Allen and while not panned, it didn’t receive the rave reviews necessary to make it a box-office hit.

As to his retirement plans, they seem to be on permanent hold. He hasn’t stopped working and when he’s not on camera – as he was almost constantly throughout the first decade of the new century – he was busy lending his name to a selection of wines produced in Niagara-on-the-Lake, Ontario as well as generating a bit of a buzz when the blue-stockened fuddy-duddies at the Ontario Liquor Control Board decided to ban his Crystal Head Vodka based on nothing more that the brand’s distinctive glass skull bottle design. Speaking by phone to Globe and Mail columnist Beppi Crosariol in May of 2010, Aykroyd said, “I like it, it kind of makes the product more appealing in my view.”

As 2010 progressed, Aykroyd became the voice of Yogi Bear, in a new feature that costarred Justine Timberlake as Yogi`s sidekick, Boo Boo. In a film that mixed animation with live action, fellow Canadian Tom Cavanagh played the role of Ranger Smith. He showed up on stage and narrated the feature-length documentary Flip Flop & Fly… Forty Years of the Downchild Blues Band. Aykroyd credits Downchild as being his inspiration for The Blues Brothers. “There would be no Blues Brothers if it wasn’t for Downchild,” said the actor in a media release accompanying the movie. He also narrated a US documentary titled Unbeaten. The micro-budget feature documentary about wheelchair racers tackling the most difficult road race in the world is introduced by Aykroyd.

What’s in the future? After years of rumours about one more Ghostbusters movie, Ivan Reitman was co-producer and Dan Aykroyd was one of the Executive Producers for the reboot of the film that started the franchise 30 years ago. It’s run was marred by ugly comment and unnecessary, unwarranted and totally over-the-top negative reaction. Other than that… retirement for Dan Aykroyd? It sure doesn’t look like it from here.

All of the images on this page were scanned from originals in the Northernstars Collection. This biography is Copyright © 2016 by Northernstars.ca and may not be reproduced without prior written permission. For more information about copyright, click here.