Home News Back to Mom’s to Open Revived Cinéfranco

(October 5, 2016 – Toronto, ON) Earlier this year Toronto film fans in general and lovers of French language films in particular were saddened when the organizers behind Cinéfranco, this city’s annual love affair with French films, announced that the 19th edition would have to be cancelled due to lack of funding. All of us here at Northernstars kept our fingers crossed that one of our favourite festivals would find a way to survive and so we are especially pleased to learn that this year’s festival is alive and, hopefully, well and will take place from October 27 to November 1.

Cinéfranco is English Canada’s largest celebration of International Francophone cinema, celebrating the richness and talents of Francophone cultures around the world and showing their diversity through the lens of both seasoned and first-time filmmakers. This years collection of award-winning films will tackle the topic of identity and human rights through comedy, drama and thriller genres. In all there are 13 feature films from France, Canada (Quebec and Ontario), Belgium, Tunisia, Morocco and Algeria. There are also 2 Canadian shorts on the program. The festival will present 7 Ontario Premieres, 2 Canadian Premieres and 3 North American Premieres.

“This year’s film selection is rooted in today’s society with topics that challenge us all,” said Marcelle Lean, Founder-Artistic Director of Cinéfranco. “The high caliber filmmakers and their work are talking about 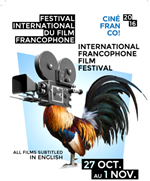 what shapes our identity like jobs, politics, sexuality, cultures and traditions, race… I hope moviegoers get inspired by these stunning films and the messages they carry.”

The opening film focuses on a 40 year old architect, Stéphanie Mazerin, forced to come back home to live with her mother, the somewhat eccentric Jacqueline Mazerin in Eric Lavaine’s comedy Back to Mom’s/Retour chez ma mère. Josiane Balasko is hilarious at the head of an excellent cast of characters played by Alexandra Lamy, Mathilde Seigner and Philippe Lefebvre as the discordant siblings.

In the closing film, As I Open My Eyes/À peine j’ouvre les yeux, Hayet, the mother of rebellious Farah, is fearful of the choices her daughter is making. Farah likes to sing defiant songs in bars, which draws the attention of the police under Ben Ali’s dictatorship in Tunisia. The relationship between mother and daughter is tense: Hayet too was a singer in her past. This is a powerful and compelling drama with a stunning sound track. It portrays through the idealist 18-year-old Farah the dreams of a muzzled Tunisian youth at the eve of the Arab Spring. Leyla Bouzid, a first-time filmmaker, and Baya Medhaffer, the newcomer actor playing Farah, have been honoured by countless awards and prizes from festivals all over the world.

Click here to read more about all the films at the 19th annual Cinéfranco. And welcome back, from all of us at Northernstars.ca