Jennifer Baichwal may have been born in born in Montreal, but she grew up in Victoria, B.C., and now makes her home in Toronto. Her first film, Looking You In the Back of the Head, asked thirteen women to try to describe themselves, and was first broadcast, to critical acclaim, on TVOntario`s From the Heart. It subsequently sold for broadcast across Canada.

Let It Come Down: The Life of Paul Bowles, her first feature documentary, won the 1999 International Emmy for Best Arts Documentary. It premiered at the Toronto International Film Festival in 1998 and was nominated that year for a Best Feature Documentary at the Genies. It won Best Biography at Hot Docs in 1999 and was picked up for theatrical release by Mongrel Media in Canada, Zeitgeist Films in the U.S. and Uplink in Japan. The film has been sold for broadcast in Canada, Europe, Scandinavia and the U.S. It has also been selected for a number of international film and television festivals, including Jerusalem, Buenos Aires, FIPA, Banff (where it received a Rockie nomination), Istanbul and Edinburgh. The film was released on DVD by Zeitgeist Films in November 2003.

The Holier It Gets documents a trek Baichwal took with her brother and two sisters to the source of the Ganges River with her father’s ashes. The film won Best Independent Canadian Film and Best Cultural Documentary at Hot Docs 2000, Gemini Awards for Best Editing and Best Writing and was nominated for the Donald Brittain Award and the Chalmers Documentarian Award. It was commissioned by TVOntario and features music by Ravi Shankar and John McLaughlin.

The True Meaning of Pictures: Shelby Lee Adams’ Apppalachia is a feature length film on the work of photographer Shelby Lee Adams. It was commissioned byTVOntario, Bravo!, SBS Australia and Discovery Germany, and is distributed by Rhombus International. The film premiered at the Toronto International Film Festival in 2002 and was invited to the Sundance International Film Festival in January 2003. It won a Gemini Award for Best Arts Documentary in 2003 and has played at numerous international festivals. The film was released on DVD by Docurama/New Video in October 2003. 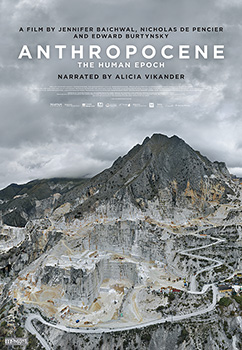 Baichwal, along with producer Nick de Pencier, was commissioned in 2003 to make 40 short films on artists who have been supported over the past four decades by the Ontario Arts Council. These protraits include Michael Ondaatje, Michael Snow, Eve Egoyan and Judith Thompson.

Her feature documentary, Manufactured Landscapes, is about the work of photographer/artist Edward Burtynsky. Produced by Mercury Films, Foundry Films and the NFB, it premiered at the 2006 Toronto International Film Festival and was given the Toronto-City Award for Best Canadian Feature Film and was released in Canada by Mongrel Media.

Her next project was another collaboration with Nick de Pencier and Daniel Iron. Act of God is a feature documentary on the metaphysical effects of being struck by lightning. It was originally commissioned by The Documentary Channel and was selected to open the 2009 Hot Docs Festival in Toronto.

In 2018, Bachwal, Nicholas de Pencier and Edward Burtynsky released Anthropocene: The Human Epoch, a documentary on what the inhabitants of Earth are doing to modify the only place we can live. Making the film took 3 years, 2 months and 22 days and was shot at 43 locations in 20 countries on 6 continents, resulting in 202 hours and 57 minutes of material that took 10 months of editing to complete. It opened to positive reviews.

This biography was originally published in 2006 and has been updated on a regular basis. It is Copyright © 2018 and may not be used without prior written permission. Click here for more information about copyright.