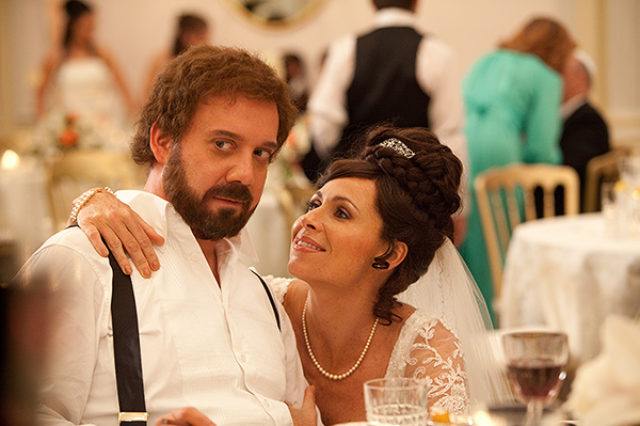 (December 29, 2010 – Toronto, ON) Richard J. Lewis’ Barney’s Version is the third screen adaptation of a Mordecai Richler novel, and in terms of quality, it rests somewhere between Ted Kotcheff’s 1974 The Apprenticeship of Duddy Kravitz, widely acknowledged to be a classic of Canadian cinema, and 1984’s Joshua Then and Now, also directed by Kotcheff, which by all accounts was judged to be a failure.

The movie begins with a flashback to Barney Panofsky’s (Paul Giamatti) misspent youth in Rome in the early 1970s. In the novel, the setting is Paris, but Richler’s loveable curmudgeon has a cult-like following in Italy and producer Robert Lantos had no trouble securing Italian financing for this co-production. Among Barney’s gang of carousing layabouts is a hard-drinking aspiring writer named Boogie (Scott Speedman) and a loopy, free-spirited ‘hippy chick,’ Clara (Rachelle Lefevre from the first two Twilight movies). Barney, the responsible one of the 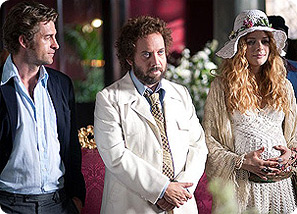 group, has already launched a reasonably successful business enterprise, exporting olive oil back home to Canada. His idyllic existence is suddenly cut short when Clara becomes pregnant, and he believes the child is his. This leads to a shotgun wedding, the birth of a stillborn mixed-race baby (the father turns out to be another of Barney’s buddies) and an unpleasant end for everyone involved.

With this set-up complete, the movie jumps to the present with Barney back in Montreal. He is a now a successful television producer with a company called Totally Unnecessary Productions (TUP), which is apparently a satirical poke at Alliance Communications, the company co-founded by Lantos in the 1980s. To deepen the in-joke, TUP’s most successful series is something called O’Malley of the North, and Paul Gross makes a cameo appearance as a Mountie dressed in full Red Serge, recalling his most famous role in Due South, a series produced by Alliance. In one brief scene, David Cronenberg has a comic turn as an exasperated TV director. (Directors Atom Egoyan, Denys Arcand and Ted Kotcheff also make cameo appearances throughout the film.)

Barney might be successful but he needs a wife to complete the picture. He unwisely chooses a high-maintenance Jewish Princess for the ‘second Mrs. Panofsky’ (Minnie Driver), but on the day of his wedding he falls head over heels for the beautiful Miriam (Rosamund Pike) whom he pursues relentlessly until she finally gives in. In the meantime, Boogie, now a serious alcoholic and drug addict, wanders in and out of his life until Barney catches him fucking the second Mrs. Panofsky. After a blowout between the two, Boogie dies in mysterious circumstances and the second Mrs. Panofsky leaves him, giving rise to the suspicion that Barney might have killed Boogie. Certainly a dogged Montreal cop (Mark Addy) thinks so, and Barney is haunted by Boogie’s death and hounded by the cop throughout the rest of the film.

His divorce clears the way from him to finally marry Miriam. They start a family and live in bourgeois bliss for a while, until Barney’s philandering manages to screw things up again and she eventually leaves him for another (Bruce Greenwood).

Director Lewis and first-time screenwriter Michael Konyves faced a tall order in adapting the popular, Giller Prize-winning novel, and they have met the challenge with uneven results. Certain characters are rendered in cartoonish proportions that are way too aggressive. For example, Driver, as Barney’s ill-chosen bride, is directed to play her Jewish-Princess role to the hilt. It’s an unpleasant caricature and often difficult to watch. Dustin Hoffman, on the other hand, appearing sporadically as Barney’s rough-edged but warm-hearted ex-cop father, is wonderful. He steals every scene he’s in, and Hoffman and Giamatti seem wholly at ease with each other, together comprising a miniature story within the movie.

But taken as a whole, Barney’s Version is too much of a sprawl, with too much to say about the ephemeral nature of relationships, Jewish guilt, politics and the television business, even hockey, to have much of a lasting emotional impact. There’s something wandering and indistinct about the picture, and you’re often not sure why you’re supposed to be investing time and interest in this guy, who, while charming and likeable, is a self-absorbed jerk.

The cinematography by the veteran Guy Dufaux is superb, the art direction by Michele Laliberte and production design by Claude Paré is first rate, and it’s perhaps the best film ever made about the television business in Canada. Look for it to clean up at the Genie Awards in 2011, and Giamatti (who already has a Golden Globe nomination for best actor) and Hoffman are serious Oscar contenders. Unfortunately, Lewis (whose only other feature as a director is Whale Music) has a knack for turning the movie’s various story strands – a murder mystery, a bittersweet romance, a buddy comedy – into the equivalent of an expensive, up-scale movie of the week. The film lacks a certain cinematic flare. Even if you can forgive the crude caricatures and the shameful way it attempts to make you weep, you’re still left with great actors stuck in a too-cautious script with pedestrian direction.

Atanarjuat: From the Edge of the Earth