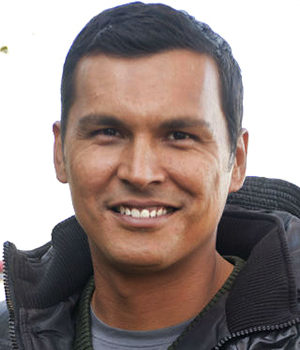 Acheiving mainstream Hollywood success can be difficult for any struggling actor, but for those who don’t fit the molds of “conventional” beauty it can be especially difficult. Casting for leading roles tends to be anything but colourblind. Often, “ethnic” actors have to adapt to survive, and play character roles described vaguely as Asian-type, Latin-type or Middle Eastern-type. It is not uncommon to see Korean actors playing Chinese characters, or Mexican actors playing Native Americans. Very rarely does an “ethnic” actor acheive mainstream success playing only his or her own nationality.

This is exactly the acheivement that Saulteaux First Nations actor Adam Beach has managed to obtain, but then fighting for his identity is something he has had to do all of his life.

Born on the Dog Creek Reserve near Ashern, Manitoba, Beach suffered the loss of both of his parents when he was eight-years-old. Within the span of three months, his mother, who was eight-months pregnant, was killed by a drunk driver, and his father drowned in a boating accident. Adam and his two younger brothers were forced to move to Winnipeg to live with an aunt and uncle. Six years later, they were sent to live with another aunt and uncle.

He signed up for a drama class in high school, simply for the chance to goof off with his friends, but he discoverd that he had a natural talent for acting. Performing became an outlet for all of the anger, bitterness and self-loathing he was experiencing. Beach credits Johnny Depp (who has a part-Cherokee ancestry) with helping him to make the decision to pursue acting professionally.

Beach began performing in local theatre productions and eventually dropped out of school to accept a lead role at the Manitoba Theatre for Young People. In 1990, at 18-years-old, he won a small role in the television miniseries Lost In the Barrens, based on the novel by Farley Mowat, starring Graham Greene. He continued to work in local theatre and television for a few years, and eventually won roles on episodes of Walker, Texas Ranger, Touched by an Angel and Lonesome Dove. He was also cast as a regular on the popular CBC series North of 60, about life on a fictional reservation in the Northwest Territories, which ran from 1992 to 1997.

In 1994, Beach was cast as the lead in Disney’s Squanto: A Warrior’s Tale, a highly imaginative story about the first contact between early settlers from England and Native Americans. The next year brought four new projects, including his appearance on Lonesome Dove. He appeared in the television movie My Indian Summer (1995), for which he won the Best Actor award at the First Americans in the Arts Awards, in the short film Prey (1995), alongside fellow Northern Star Sandra Oh, and in the road-trip movie, A Boy Called Hate (1995). But it was his performance in Bruce McDonald’s comic drama Dance Me Outside (1995) that made a real impact. Dance Me Outside told the story of a group of young Native Americans on the Kidabanesee Reserve. Beach played Frank Fencepost, a dense but street-smart teenager in one of his most memorable early roles.

In 1996 CBC created a television series called The Rez based around the premise and characters of Dance Me Outside. He was cast as one of the characters, though not the same one he played in the film. He also appeared in Coyote Summer (1996) and Song of Hiawatha (1997). Also in 1996, he became a father for the first time when son Noah was born. Two years later, a second son, Luke, was born.

Chris Eyre’s Smoke Signals (1998) was the first film entirely written, produced, directed and acted by Native Americans. It premiered at the Sundance Film Festival and won both the Audience Award and the Filmmaker’s Trophy, as well as being nominated for the Grand Jury Prize. Beach played Victor Joseph, a reserved young man whose estranged father dies, leaving him to travel from Idaho to Phoenix to pick up his ashes. Reluctantly he agrees to be accompanied by Thomas Builds-the-Fire (Evan Adams), who had been saved from a house fire as an infant by Victor`s father. Smoke Signals is basically a road-trip movie and focused on the dialogue between the two leads. Much of the appeal of the movie is that it was not made only for a Native audience. What the film`s characters experience and discuss is universal.

Beach found that after Smoke Signals he was suddenly in demand from Hollywood. His unconventionally handsome face was now considered recognizable and 10 years of steady work had refined his talent. He took a small role in the Disney hockey movie, Mystery, Alaska (1999) in which he co-starred with Russell Crowe and was paid to play hockey for three months.

In 2000, he starred in the Canadian thriller The Last Stop, along with Jurgen Prochnow, Rose McGowan and fellow Canadian Callum Keith Rennie. Beach played a Colorado state trooper who gets stranded at a rundown motel during a blizzard with a group of reluctant strangers. After a bagful of money and two bodies turn up, everybody becomes a suspect and he has to keep order, while catching the murderer.

In 2002, he landed a part in the John Woo action movie, Windtalkers, which was based on the real-life story of the code developed from 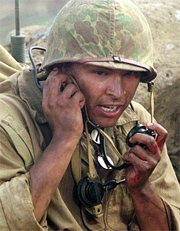 the Navajo language for use by the American forces during the Second World War. Beach starred as Private Ben Yahzee, as a Navajo codetalker, guarded and ultimately befriended by Nicholas Cage`s battle-weary sargeant. The codetalkers had to be protected (or as a last resort, killed) to prevent their capture in order to prevent the code from being deciphered by the enemy.

His role in Windtalkers required Adam to learn the Navajo language, which he was able to use in his next major project, the PBS-TV movie, Skinwalkers (2002). With Robert Redford executive producing and Eyr directing, Skinwalkers told the story of the mysterious murders of three medicine men on the Navajo reservation in the Southwestern U.S.A. A seasoned urban cop, returning to his homeland, and his new partner, an FBI Academy grad (played by Beach), find clues to indicate that the murderer may be a “skinwalker,” a Navajo witch with frightening powers and the ability to kill with curses.

More recent projects include the TV movie Cowboys and Indians: The J.J. Harper Story (2003), in which he plays the title character, and the new Jon Favreau comedy The Big Empty (2003), an homage to the pulpy, fatalistic film noirs of the 1940s and 1950s. He also returned to the character he played in Skinwalkers in the television mystery Coyote Walks, which aired in 2003. Since then he`s been moving quickly from project to project. A sure sign of an actor who is in demand.

From quick episodic TV appearances on shows like Third Watch and JAG, to costarring roles in huge Hollywood movies like Clint Eastwood`s story of the 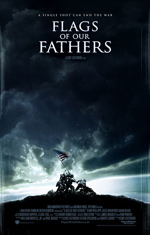 raising of the US flag during the battle of Iwo Jima. Flags of Our Fathers may be the most important film Beach has done to date, given the place Iwo Jima holds in American history, plus the Oscar-winning combination of Clint Eastwood directing and Paul Haggis scripting the movie.

Back home, Beach was cast to be in the made-in-Canada series, Moose TV. He also appeared in the mini-series, Comanche Moon and in another mini-series based on the book and the events that inspired it, Bury My Heart at Wounded Knee. It received 17 Emmy nominations, the most of any show at the 59th Emmy Awards held in September of 2007. It went on to win five awards includng the Emmy for Oustanding Made For Television Movie. After six years in development, the film, which was directed by Yves Simoneau, premiered on HBO.

Beach considers himself Canadian and divides his time between Los Angeles, where he recently moved, and Ottawa where his new wife, Tara Mason, works as a civil servant. Though he plans to continue acting, he has expressed a desire to go back to school to earn a degree in politcal science and eventually get into politics. He spends much of his time attending pow-wows, speaking on issues affecting Native Americans.

Adam Beach has acheived a great deal for an actor refusing to compromise his heritage. He`s been photographed for Vanity Fair’s Hollywood Issue and was included on E! Entertainment`s 2002 “Sizzling Sixteen” list. After more than 15 years as a professional actor he has become one of the most prolific First Nations actors working today.

This biography is Copyright © 2007 by: Catherine Solmes and may not be reproduced without prior written permission. For more information about copyright, click here.