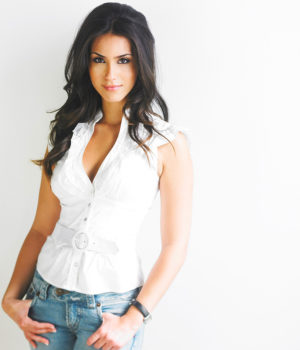 (January 2, 2017 – Toronto, ON) Maybe it’s the influence of La La Land or maybe just the endless fascination with a form of entertainment called Burlesque, but a new dance drama described as empowering begins shooting today in Toronto. Becoming Burlesque stars Shiva Negar (pictured) in the role of Fatima, a second-generation, mixed-race, secular Muslim woman, who discovers her voice through dance.

Struggling with her sense of belonging, Fatima navigates between modern city surroundings and mixed family cultural expectations, when she gets seduced by the fearless world of a Burlesque cabaret. There she becomes empowered to redefine herself, and unleashes a brave and confident alter-ego, “Babylon.”

Makeup for the film production has been donated by MAC, and through a partial grant William F. White is providing equipment. The production of Becoming Burlesque includes the financial participation of Telefilm Canada.
The shoot is scheduled to wrap on January 19 and this early in the production phase, no release date has been announced.