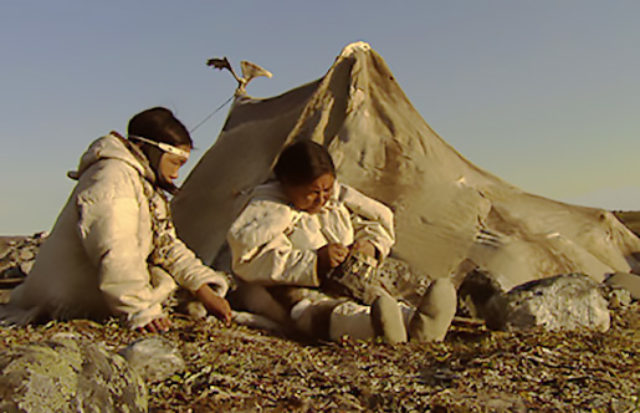 Before Tomorrow was released theatrically on March 27, 2009 and then rolled out across the country right up until early June. It had previously made the rounds of various film festivals and was an official selection at Sundance and the Toronto International. Northernstars previously reviewed the film when it played at The Victoria Film Festival. The DVD was released on July 7th.

Much has already been written about the film, but it seems like the single constant selling point is the fact that this is the final installment of a triology of films that began with Atanarjuat: The Fast Runner (2001) and continued with The Journals of Knud Rasmussen (2006). I was not expecting this DVD release to contain all three films, but I hope at some point a distributor will package them as a set.

I have mixed feelings about the film. While I can certainly understand how it might cause some reviewers to wax poetic about the landscape, there is little enough to see let alone write about. Yes it is stark and in its vastness threatening, but in too many scenes it serves as nothing more than some Bergmanesque device to separate brief unconnected bits of dialogue. It rarely pushes the story forward and despite the plot, the main characters seem quite able to cope with their harsh and lonely environment. It often seems that this is nothing more than a “coming-of-age” story as we see the very young character of Maniq (Paul-Dylan Ivalu) take on 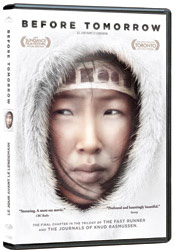 the challenge of his new circumstances and become a capable hunter. Although abandoned by unthinkable tragedy, the young boy and his grandmother seem to survive quite well, including being attacked by wolves.

Beyond all that, however, the DVD is still worth a place next to your wide-screen TV. It is a bit of history even if the original story was set in Greenland. For example, I am an airplane buff and will often set the PVR to capture some movie from the 50s that contains footage of the first generation of jets. Watching Beyond Tomorrow I got a real sense that what I was watching was very real and historically accurate. That was confirmed in one of the brief snippets of video about the making of the film offered as the only extra on this DVD. The seal-skin tents, the tools, the weapons, the kayaks were all authentic and the set designers and dressers took pains to make sure that what we were seeing was exactly as it would have been in the 1850s. It was only after seeing the film and having time to reflect on what it must have been like that the power of the story had its impact. What with GPS-enabled cellphones, search planes and rescue helicopters it is only the truly unlucky who perish in the wild these days. In the time of this movie, Death was a constant companion and came quickly taking many different forms, some of them human.