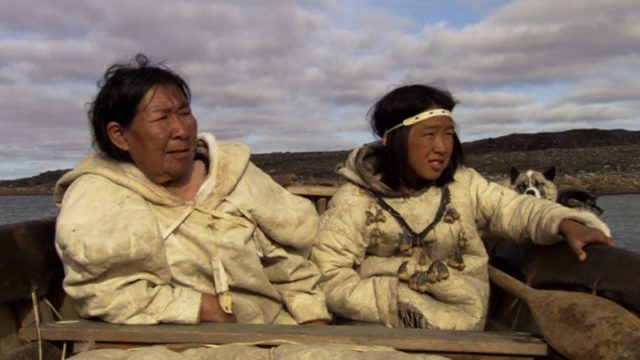 Before Tomorrow
Review by Glen Russell

Before Tomorrow has one silent character more ubiquitous and omnipresent than the ‘fifth lady’ of TV’s Sex in the City. Carrie, Miranda, Charlotte and Samantha always said their ‘fifth lady’ was New York City. Before Tomorrow’s ‘fifth’ is the Canadian Arctic North. This non-speaking character takes you to greater insights than the transparent, urban dilemmas of four women in New York City.

The silence of Canada’s Arctic North says so much in this debate as this film unfolds. It is a seemingly simple story of an Inuit grandmother and grandson left behind by their community to dry fish while the others go on to hunt. Co-directors, Marie-Helene Cousineau’s and Madeline Piujug Ivalu’s story takes place in the mid 1840s. It is before invading Europeans make contact with the Inuit. It is a time of simplicity. Like Sex in the City, this film is about the empowerment of women, Inuit women, on-screen and off-screen.

The grandmother, played by Ivalu leads her grandson, played by Paul-Dylan Ivalu to face the ultimate challenge: Survive alone on a remote Arctic Island. She is the spirit, the strength through this trial 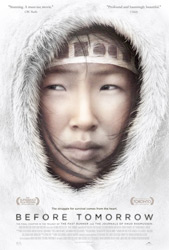 guiding her grandson to manhood. The story from Jørn Riel’s novel was discovered by co-director Cousineau who took it to the Arnait collective. This group of Igloolik women have been producing videos since 1991 documenting the unique knowledge and perspectives of Inuit women. Shot in Nunavik over four seasons, the film captures and uses its rich ‘landscape of meaning’ in the story development.

The landscape is so stark. It says a thousand things while Ningiuk and Maniq, her grandson, travel through this landscape drying fish. They eventually will catch up to the others hunting only to discover horrific news. Ningiuk realizes she must now teach her grandson how to survive in this harsh setting. The narrative becomes a journey of self-discovery and survival in this pervasive frozen Arctic landscape. Shots of this endless frozen chaos—without a sign, without a road—contrasts poetically to the finite containment inside their hut at night.

We watch long, endless, night time shots of Maniq and Ningiuk inside with cryptic dialogue. A single camera centred on the small camp flame moves only to Ningiuk’s stoic face. We watch Ningiuk teach her grandson the ancient art of survival with a mix of the practical and Inuit mythology. From this point in the film, the journey appears to brood like the oppressive, Arctic weather outside their hut. We watch a simple life of subsistence—all so alien to our western worldview. Maniq is taught to dig a successful ice hole, how to skin and preserve, how to defend against savage wolves in the infinity of snow and ice.

Is this film simple, or more complex? The answer for me came when I surrendered completely to Maniq’s journey and the film’s fifth character, Canada’s Arctic North. Both so stark—it is stunning. Its silences, stillness and peace dare us to take just one moment from our many, New York moments of complex self-absorption.

The landscape says: “Step outside your 21 century sensibilities–before tomorrow. You’re living in the speed of your tomorrows with information overload from Google.”

Maniq’s journey asks: “Your life, its environment: Are they simple or complex? What should it be? What can it be?”

Some of this film’s wealth comes after thinking about these questions.

Also see The cast and crew of Before Tomorrow.

Glen Russell is a freelance writer and occasional contributor to Northernstars.ca. He lives on Vancouver Island.