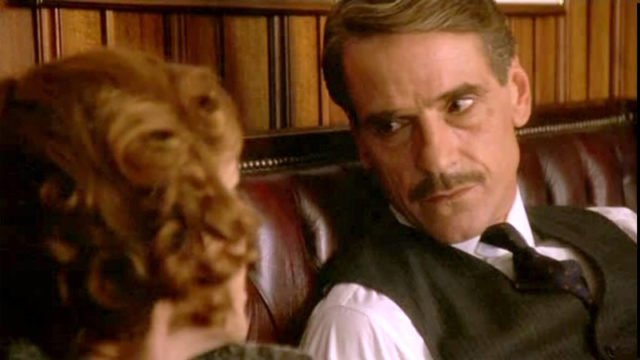 Being Julia: The Stage Is a World
by Maurie Alioff

(September, 2004 – Montreal, Québec) Back in early August, I asked British playwright and veteran screenwriter Ronald Harwood what he loves most about the theatre and how it differs from film. He zeroed in on the heart of the matter: “It’s live, and that can be very bad and very wonderful. The performances change.” A completed movie is fixed in its final shape, Harwood continued. 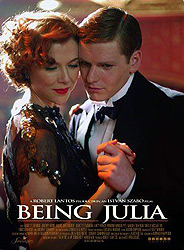 “Annette Bening is not going to let me down. But the theatre is a much more dangerous operation.”

The movie Harwood is referring to is Being Julia, his most recent screen adaptation. His other credits include Roman Polanski’s Oliver Twist, currently in production, last year’s The Statement directed by Norman Jewison and The Pianist, which earned Harwood, Polanski and Adrien Brody Oscars® in 2002, not to mention the Cannes Palme d’Or. You might remember the prolific screenwriter accepting his Academy Award with unaffected enthusiasm and gratitude.

Based on a 1947 Somerset Maugham novel, Theatre, Being Julia originated, Harwood explained, with “a brilliant young British producer called Mark Milln. He acquired the rights and came to me with the book.” Long before Milln’s approached him, Harwood had considered buying the rights himself, so he “was immensely excited. I read the book again and knew exactly how I wanted to do it.” Eventually, Canada’s own megaproducer, Robert Lantos, with whom Harwood collaborated on The Statement, took Being Julia from early 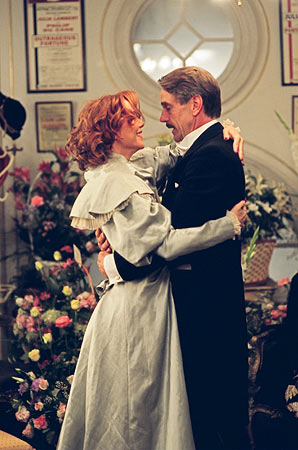 development to its screening as the 2004 Toronto International Film Festival’s opening night gala. According to Harwood, Lantos is “a very good man and a very good producer,” even if he does sometimes get a little too hands–on with his writers and directors. Lantos is from the “David Selznick school” of producing, Harwood chuckled, “the Irving Thalberg de nos jours.”

A polished film tastefully directed by Hungarian István Szabó, Lantos’s collaborator on Sunshine (1999), Being Julia fits into the long tradition of backstage pictures that range from manic farces and breezy romances to potent dramas suffused in the glow of footlights. As in many films of the genre, the theatre in Being Julia is both a self–contained milieu separate from the real world, and, as Harwood suggests when he talks about its creative risk–taking, a reflection of life’s wild cards and existential challenges. Far lighter in tone than John Cassavetes’s Opening Night (1977), and pitched closer to the urbane wit of Joseph Mankiewicz’s All about Eve (1950), Szabó’s film shares with these two classics the central figure of an aging female star whose professional and personal crises intersect. Moreover, like All about Eve, Being Julia depicts a manipulative young actress, a somewhat distant husband and a loyal, sharp–tongued female assistant.

Mankiewicz’s picture (coincidentally based on a short story published the same year as Maugham’s novel), is all about the relationship between the aging Margo Channing (Bette Davis) and the cunning ingenue Eve (Anne Baxter), who is out to usurp her position. While London stage star Julia Lambert (Bening) gets deceived by a less malevolent version of Eve in Being Julia, her story is all about her relationship to herself. Set in the 1930s, the picture opens with a burst of theatrical bravado. A Dickensian figure in a flowing scarf lurching toward us turns out to be Jimmie Langston (Michael Gambon), a one–time associate of Julia and her producer husband, Michael (Jeremy Irons). A flashback character in Maugham’s novel, the long–dead Jimmie was transformed by Harwood’s script into a larger–than–life creature who is, says the writer, “constantly in Julia’s psyche.” Simultaneously cynical and reverential about his obsession—the theatre—Langston appears throughout the film as Julia’s amoral Jiminy Cricket, at one point

advising her that opening her legs to a young lover will revive her creative passion.

Julia flashes on Jimmie, a ghost from her past, because her self–confidence is eroding. The beloved star of crowd–pleasers she performs in the West End theatre she owns with Michael, 45–year–old Julia despairs that her lustre will soon fade. Moreover, tired of non–stop role–playing on and off stage (“I never know when you’re acting,” says another character), her performances are becoming mechanical. Although her marriage is a model of genial sophistication, the absence of passion in the apparently open relationship obviously gets to her. To top things off, an attractive male friend (Bruce Greenwood) thinks they should end their relationship.

The jaded actress gets yanked out of her state of limbo when she abandons herself to an affair with Tom (Shaun Evans), an American about the same age as her son, Roger (Thomas Sturridge). For Harwood, Maugham’s primary interest in the story was “the older woman and the younger man. And he set it, very cleverly I think, against the theatre background.” Once Julia gives into her desire—unaware that the grinning American is not as innocent as he seems—her eyes brighten, her smile widens and the world–weary sarcasm of the opening scenes transforms into giddy excitement.

At the heart of Szabó’s sumptuously detailed period piece is Bening’s performance as a woman whose “infinite variety” the script compares to Shakespeare’s Cleopatra. As the movie progresses, we see Julia as both regal and 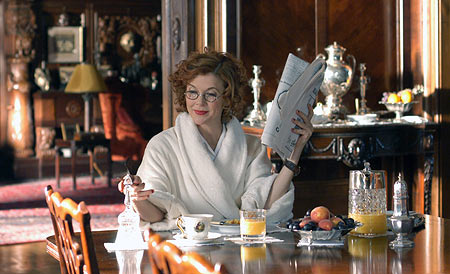 maternal, a fabulously plumed diva and in moments of raw emotion, purged of all artifice. From The Grifters (1990) to The American President (1995), In Dreams and American Beauty (both 1999), Bening’s unaffected acting style can be vividly truthful. In American Beauty, Carolyn Burnham’s befuddling pang of desire for her estranged husband is matched by Julia’s realization she wants to make love to Tom in his crummy little bed–sitter. “I think she’s spectacularly good in Being Julia,” Ronald Harwood told me. “She’s wonderful. Couldn’t ask for better.”

To imagine Being Julia on paper, Harwood drew on Maugham’s novel and his own experience. “I’ve worked and lived in the theatre most of my life. I know actresses on all levels.” Born in South Africa, Harwood’s long–running theatrical career began with a job as the dresser for Sir Donald Wolfit, an eccentric stage legend who preferred touring the provinces with his own company to a more settled career on the West End stage. In the movies, Wolfit appeared in such classics of British cinema as Room at the Top (1959) and Lawrence of Arabia (1961).

Eventually Harwood began writing and one of his best–known, still frequently mounted plays is The Dresser, a London hit in 1980 that travelled successfully to Broadway a year later. Sad, tender and funny, the quasi–autobiographical piece concerns a fusspot assistant to a famous British actor who’s experiencing a breakdown during a tour of King Lear. The screenplay Harwood adapted from the play was made into a much–admired, Oscar®–nominated 1983 film with Albert Finney as “Sir” and Tom Courtenay as his loyal protector. Apart from his dramatic works, Harwood has also written about the theatre extensively in books such as Sir Donald Wolfit CBE: His Life and Work in the Unfashionable Theatre and All the World’s a Stage, a companion piece to the BBC Two television series.

Not one to mystify the creative process, Harwood sees the switchover from stage to film writing as a “shift you have to make. It’s not such a difficult shift, but it is entirely different.” Harwood credits legendary director Alexander Mackendrick (The Ladykillers [1955] and Sweet Smell of Success [1957]) with teaching him the essentials of structuring a screenplay. For many cinephiles, the picture Harwood wrote for Mackendrick, A High Wind in Jamaica (1965), is a frustratingly ignored gem.

When it comes to the art of adaptation, Harwood says that both he and Polanski believe above all in “preserving the heart of what you’re 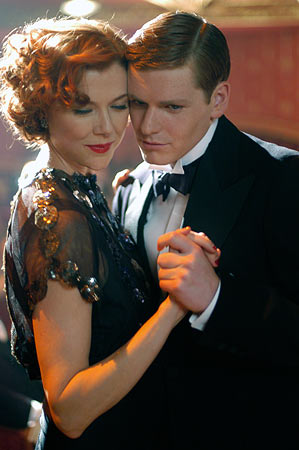 adapting, be it a novel or a play or a magazine article. You have to want to do that particular story. It’s no good saying, ‘Oh yes, this is a marvellous idea, I could turn this into a Terminator 13–kind of story.’ You have to do what you’re given. Otherwise, why buy those rights? And then you have to want to express it in cinematic terms.” And of course, whatever the writer perceives as a flourish or an interesting detail, but not essential to the heart of the story, should be eliminated.

Being Julia marks Harwood’s second collaboration with Szabó, the first being Taking Sides, released in 2001. That film was an adaptation of Harwood’s own stage play about Wilhelm Furtwangler, the real–life conductor of the Berlin Symphony during the Nazi era who claimed to despise the regime even as he performed for it. Taking Sides recalled one of Szabó’s best–known movies, Mephisto (1981), in which an actor, unforgettably played by Klaus Maria Brandauer, sells his soul to the Nazis so that he can preserve his beloved career in the theatre.

In Mephisto, Hendrik Hoefgen must choose between theatre and life. Julia Lambert faces a similar dilemma, although Szabó’s latest picture doesn’t share Mephisto’s larger moral and historical implications (in fact, Harwood and Szabó barely address the catastrophes of the late 1930s). In a picture with the breezy sophistication, the elegant atmosphere and the melancholy undercurrent of an Ernst Lubitsch comedy, Julia cuts down on her performing so that she can experience life again, and she ultimately chooses life over theatre. According to Harwood, “What happens in the movie is that she finds out what real feeling is about.”

Ironically, Julia’s choice electrifies the performance she gives in the movie’s last scene, a show of theatrical brilliance inspired by the drama of her life. It’s a performance with a double meaning, one for the audience, another for her betrayers. Julia rises as a sacred bird of the theatre out of her own ashes, and Bening’s performance of this performance hits the same kind of metatheatrical transcendence that Naomi Watts achieved during the audition scene of David Lynch’s Mulholland Drive. The actress and the woman can now live together in harmony.

Back to the Cast & Crew of Being Julia.

This article originally appeared in Issue No. 47 (September 2004) of Take One Magazine. Northernstars.ca acquired the archives of Take One in 2007. Photos and poster courtesy of ThinkFilm – Used with permission.