Lyriq Bent was born in Jamaica and moved to Toronto with his family at the age of six. He did well in high school, and later attended Seneca College, graduating with high honours. He began working as a computer graphic technician; his plans, however, were short lived as he decided to take up acting on a dare. From his first appearance as a non-speaking extra on the series Relic Hunter in 2000, this versatile actor has played an eclectic mix of roles and his multiple guest-starring television roles have kept him very busy.

He is perhaps best known for portraying Lt. Daniel Rigg, a cop who hardly speaks throughout the films, in Saw II–IV, which were shot in Toronto. The Saw franchise has pulled in over a billion dollars in ticket sales worldwide. Bent’s other film credits include Crime Spree with Gerard Depardieu, Bille Woodruff’s 2003 dance 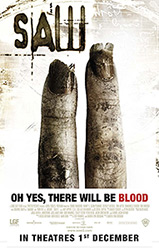 He has had episodic series appearances and recurring roles in Street Time, Blue Murder, Platinum, Mutant X, Kojak, Kevin Hill, 13 episodes of Angela’s Eyes, CSI Miami, Haven, seven episodes of Sophie and 45 episodes as Sgt. Frank Best in the hit Canadian cop drama Rookie Blue. He is pictured above in his role as Chekura in the CBC mini-series The Book of Negroes.

This biography is was written for Northernstars.ca by Wyndham Wise and is Copyright © 2013. It may not be reproduced without prior written permission. Click here for more about copyright.