(September 27, 2021 – Toronto, ON) Best Sellers, a new comedy from first-time feature director Lina Roesller — whose career until now has primarily been in front of the camera in episodes of Murdoch Mysteries and Lost Girls—moves along a path tempered with a few delightful bumps to offset the familiarity of a road well-traveled.

Like its namesake, Best Sellers operates with the precision of a cinematic page-turner featuring snarly characters with lovable affectations, broken people in repair, and a back-against-the-wall conflict filling their lives with purpose.

It’s not all that meaningful, but it is entertaining.

Aubrey Plaza is one of the film’s stars. Plaza is Betty Grable on the big screen with a Veronica Lake attitude or, for those in need of a more current reference, a Mila Kunas with the throw-away confidence of Rebel Wilson and the unflappable ease of Timothée Chalamet.

Plaza is a venerable woman of charm and comedic talents, ideally suited for an era of calculated apathy, a characteristic she perfects in television’s Parks and Recreation as April Ludgate. But in Best Sellers, Aubrey embodies an ambitious character far different from April.

Plaza plays Lucy Stanbridge, a determined book publisher who seems helpless in preventing the publishing house she inherits from her father from sinking beneath her guidance. Lucy sits behind a desk, dwarfed by its size as if this one piece of furniture were an immense bodyguard that can turn on her without notice. She paces about her office beneath a looming portrait of her father—reminding her of a legacy she is in constant fear of failing. 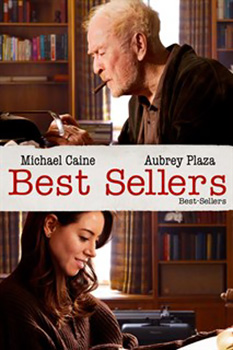 With the help of Rachel (Ellen Wong), her sole employee and under-acknowledged best friend, Lucy discovers that Harris Shaw (Michael Caine), the author of the company’s most celebrated publication, owes them a manuscript.

Now Lucy must break all sorts of protocols and property laws to convince Shaw to come out of retirement, honour his contract and save the company from the clutches of the smarmily handsome Jack Sinclair (Scott Speedman), a former employee, now a competitor.

Shaw is a curmudgeonly hermit living in the chaos of strewn books and the crumple pages of a writer’s second-guesses. Shaw has suffered a loss and has not been able to recapture the success of his first book. You know the story; he has no respect for himself or his work and a disdain for the publishing industry. His sole affections are reserved for one living being, a cat. But what a cat! A cat who stands on hind legs observing Harris’ failures without judgment. No one involved in making the film could have guessed how damn good that cat would be. The cat has a minor storyline but massive screen appeal.

And then there is Cary Elwes, whose over-the-top turn as a foppish book critic registers as the film’s most blatant offense. But his performance is somewhat offset with the knowledge that Elwes befriended Roseller at TIFF’s rising stars program and brought her the script.

Roseller makes it easy to climb on board and go for the ride despite a few lulls along the way. The idea that Shaw publicly urinating on copies of his book and inciting chants of “bull-shite” should help him become a viral star among people who don’t buy books (or even t-shirts) feels like an enormous reach to be relevant. And having Stanford and Harris spar towards a mutual understanding is an inevitable part of the journey that is obvious from the moment you look at the film’s poster.

The surprises in the film come from second-tier characters whose storylines are like sidebars to the bigger story—I’m pointing specifically at Ellen Wong’s Rachel Spence. The strength of Wong’s performance is reminiscent of Megan Park’s film-stealing turn as Dalia in Michael Dowse’s The ‘F’ Word (2013). Rachel is Lucy’s sole employee and biggest cheerleader. Rachel is frank without being coarse, agreeable without being soft. And though I say this at risk of scandalously comparing a human to a feline, what the cat is to Harris, Rachel is to Lucy.

Best Sellers is charming, primarily inoffensive, and marks a young director quite capable of working with a star cast. Watch the trailer and learn more about the cast and crew of Best Sellers.

Thom Ernst is a Toronto-based film critic and writer and an active member of the (TFCA) Toronto Film Critics’ Association. His work has appeared in various publications including Playback Magazine, The Toronto Star, and The National Post. He is known to CBC Radio listeners for his lively contributions to Fresh Air, Metro Morning, and CBC Syndication as well as appearing on-air for CTV News Channel and The Agenda with Steve Paikin. He was host, interviewer and producer of televisions’ longest running movie program Saturday Night at the Movies. Currently he can be heard interviewing Canadian filmmakers on the Kingston Canadian Film Festival podcast, Rewind, Fast-Forward.