(December 2002 – Toronto, ON) Set in downtown Toronto, Between Strangers interweaves the threads of three separate stories about three women of different backgrounds and from different generations. The emotional mysteries of the women gradually unfold, shedding light on each of their relationships and providing insight into long–buried secrets.

Olivia is a woman of Italian descent in her 60s locked in a loveless marriage to her bitter husband, who is confined to a wheelchair. A frustrated artist, she spends her lonely hours sketching in a park, her only companion a friendly gardener who likes her and encourages herto draw. She comes to realize a celebrated artist who is in Toronto for a book signing is the daughter she gave up for adoption more than 30 years earlier. When she tells her husband about her past, she is ordered out of his life. 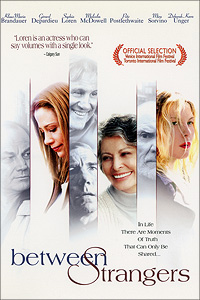 Catherine is an acclaimed cellist who’s past includes childhood abuse and the death of her mother at the hands of her father. When her father is released from prison, she stalks him with a gun, planning to kill him. He becomes the victim of random violence, and is beaten to death by street thugs.

Natalia is a rising star in the world of photojournalism, with her first Time cover just published. Her father, an award–winning photographer, is immensely proud and desperately wants his daughter to succeed. However, Natalia is racked with guilt when she realizes she could have saved the child—whose picture stares out at her from the cover of the magazine—from death in the brutal Angolan civil war; instead, she took the picture.

As the stories unfold, the paths of the three women cross and criss–cross until they finally meet and sit together at the airport. Olivia is leaving for Florence, Italy, to pursue her life’s dream; Catherine turns down a recording contract in New York to return “home”; while Natalia gives up photography and bids her father goodbye. As the three women sit together, they witness a young girl—who has previously appeared in the film twice before—laughing at them. She is then picked up by her father. The three women laugh, and the film freezes on Olivia.

To say this film is a love letter from a loving son to his movie–star mother would not be a stretch, considering in this case the son is Edoardo Ponti and the mother the incomparable Sophia Loren. With an extremely light touch, first–time director Ponti, whose father is, of course, the legendaryItalian producer Carlo Ponti, guides his mother through her 100th film. Remarkably, the age–defying Loren is made up to look older than her 68 years, yet her radiant beauty still shines through the darkened eyeshadow. She is one of the last of a dying breed, a true cinema goddess whose mere presence lights up a room or a film.

However, Between Strangers needs more than a screen goddess to liven up the material. With only the slightest hint at dramatic tension, the stories meander along as a series of vignettes built around the theme of father–daughter relationships, or in the case of Loren’s character, Olivia, the dynamics of an abandoned child (Wendy Crewson) and her mother who meet briefly at a book signing. Natalia (Mira Sorvino) needs to break out of the shadow of her overbearing father (Klaus Maria Brandauer), while Catherine (Deborah Kara Unger) needs to see her father (Malcolm McDowell) dead before she can break free from her troubled past. The performances are uniformly good, if not outstanding, and the international cast is rounded out by PetePostlethwaite as the bitter husband and Gérard Depardieu as the friendly gardener. But there is no script to dig into, and director Ponti takes no chances, giving his three female leads generouslens time but precious little to say that isn’t clichéd or dull. Their individual performances are wasted. 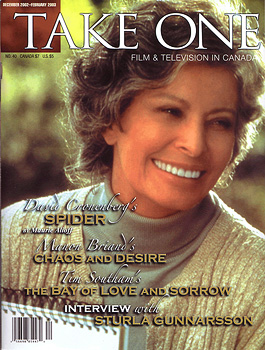 This Italian–Canadian co–production, the second “Canadian” film starring Loren (her first was the far superior A Special Day directed by Ettore Scola in Montreal in 1977, which went on to secure an Oscar® nomination for Best Foreign–Language Film) is unique in the sense that despite its “Euro–pudding” casting—Loren is Italian, McDowell and Postlethwaite English, Brandauer German, Depardieu French, Sorvino American, and Crewson and Unger Canadian—no one seems out of place in multicultural Toronto and astonishingly, Toronto is not disguised. In fact, Between Strangers just might be one of the finest depictions of Toronto ever put on film, and for that reason alone the film can be embraced as Canadian. It’s too bad Ponti failed to capture the emotional depths of his complex characters as well as he captures the city.

The film is surprisingly passionless and the ending is false, even trite. Ponti holds onto the reins too tightly during his first time out and moves too cautiously. With such a high–powered cast, Between Strangers is weighed down by its own importance and fails to rise above the mediocre. It might be a love–letter from a loving son to his adored mother, but, unfortunately, the sentiments are pure Hallmark.

Also see: The Cast & Crew of Between Strangers.

This article was originally published in Take One magazine, Issue number 40 in December of 2002. Northernstars.ca acquired the digital archives of Take One in 2007.