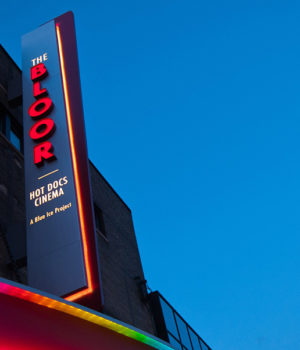 (June 23, 2016 – Toronto, ON) You know something is going to be very important when the Mayor of Toronto shows up. John Tory was just one of the featured speakers this morning at a media conference at Toronto’s venerable Bloor Hot Docs Cinema. Exactly how important only a handful of people knew and when the news was announced there was a spontaneous eruption of applause.

In fact, there were two announcements this morning and the hint that something big was coming came early when Hot Docs President Chris McDonald let it be known that members of the Rogers family would be joining him on stage.

The first was the establishment of the Hot Docs Ted Rogers Fund with a generous $1-million gift from the Rogers Foundation. Administered by Hot Docs, this new fund will offer production grants to Canadian filmmakers for feature-length documentary work. Each year for the next ten years, the Fund will disburse up to $35,000 each to three to four projects. Full eligibility and application requirements are now available online. Applications will be accepted beginning August 11, 2016, with a rolling deadline.

“Documentaries provide an urgently needed reflection of our society – warts and all. The Rogers Foundation’s generous support for doc-makers recognizes the depth of talent in this country, and provides them critical resources to tell their stories,” said McDonald. “Doc-making has never been an easy way to earn a living, but it just got significantly more realistic for our Canadian filmmakers.”

The second announcement was stunning. In partnership with the Blue Ice Group’s Neil Tabatznik, Hot Docs has managed, operated and programmed the Bloor Hot Docs Cinema since it was renovated and reopened in March 2012 as one of the world’s first documentary-focused theatres… but it didn’t own the building. Thanks to a remarkable gift of $4-million from the Rogers Foundation, the organization behind the festival and the cinema has been able to purchase the Bloor Hot Docs Cinema ensuring its survival for decades to come.

“Toronto was once home to over 65 neighbourhood cinemas and only a handful remain today. The vision and generosity of the Tabatznik Family and now the Rogers Family have not only helped save the beloved Bloor Cinema, but they have helped Hot Docs do the unimaginable – establish

one of the only doc-focused theatres in the world,” said Chris McDonald. “Toronto audiences are curious, loyal and unafraid of intelligent and thought-provoking stories. The continued success of this venue is a testament to their passion.”

Under Hot Docs’ ownership, the venue will operate as the Hot Docs Ted Rogers Cinema, recognizing the late philanthropist and visionary President and CEO of Rogers Communications.

In four short years, the Bloor Hot Docs Cinema has quickly become one of Toronto’s hottest cultural hubs, welcoming audiences of 775,000 and building a loyal membership of over 5,500 for first-run documentary films, special screening series and events. In addition to the Hot Docs Festival and wildly popular Doc Soup series, original programming initiatives have expanded to include Doc Soup Sundays, featuring arts, culture and design docs, the Curious Minds morning speaker series, collaborations with the Royal Conservatory of Music, The Globe and Mail, Ramsay Talks, NXNE, the AGO and others. The Cinema has hosted special guests for its curated programming, including former Governor General Michaëlle Jean, astronaut Dr. Roberta Bondar, George “Sulu” Takei, motivational speaker Tony Robbins, musicians Natalie Merchant and The National’s Matt Berninger, among many others. The Hot Docs Ted Rogers Cinema will continue this tradition of engaging and thought-provoking programming excellence, with plans that include a live podcast festival and high-profile speaker series in the upcoming season.

Curtain Up for Vince Guzzo