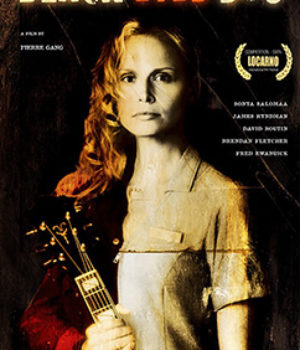 It’s been 10 years since Pierre Gang wrote and directed Sous-sol (1996), his impressive debut feature about a young boy who is so traumatized by watching his parents engage in some kinky sex – after which his father dies – that he literally doesn’t grow up. With Black Eyed Dog, he has finally returned to the big screen after toiling many years in television, most notably directing two popular miniseries from the late 1990s, Armistead Maupin’s More Tales of the City and Further Tales of the City, for American cable.

However, the poetic flare he showed in Sous-sol is sadly lacking here, although he is trawling in similar waters of childhood trauma and its crippling consequences in adult life. Betty (played by Vancouver’s Sonya Salomaa) is a tough-as-nails and twice-as-hard waitress serving in the Rotary diner in Nowhereville (named Riverton in the film), located in the heart of the Miramachi backwater of New Brunswick. An aspiring folk singer – whose hero is Joni Mitchell because she also came from a small town and managed to get out to find fame and fortune –at one point in her life Betty did manage to escape town for a better future, but was dragged back to take care of her dying, insane mother and ne’er-do-well father, who spends his time hanging around the diner.

To make matters worse, she is trying to break away from a violent, abusive ex-boyfriend (David Boutin) who treats his gay brother (Brendan Fletcher) like a punching back, her clinging, immature sister (Nadia Litz) who drags around a son she doesn’t care for, and some unpleasant memories that involve a chained neighbour’s dog (the titular black-eyed dog) that attacked her when she was a child. Throw into the mix a serial killer on the lose, who is terrorizing the town, and an ineffectual but likeable local cop (Corner Gas’ Ed Ewanuick) who has a crush on Betty, and you have the makings of Peyton Place on the Miramachi.

For the first 60 minutes, Black Eyed Dog works as an interesting, realistic working-class drama, albeit in the low-budget, dreary small-town Canadian sort of way. Salomaa appears in almost every scene, and despite her fashion-model good looks, makes Betty believable tough as a working gal who has seen her dreams crushed by the daily grind. He ex-boyfriend’s a violent jerk, her sister an irresponsible slut, her mother a raving lunatic and her father a lazy bum. No wonder this girl is pissed off with the world.

Gang keeps the sensational elements to the serial killer back story off camera, which is a relief, but the plot turns on a scene with Betty in a casual motel-room affair with a Quebec writer (James Hyndman), which verges on rape, intercut with a brutal, senseless murder of an old couple, and the film goes down hill from there. It becomes illogical, with plot holes you could drive a truck through, secondary storylines that are left dangling, and a transformed Betty is doing her best Joni Mitchell impersonation up on stage. It consigns Black Eyed Dog to mediocrity and betrays a promising beginning.