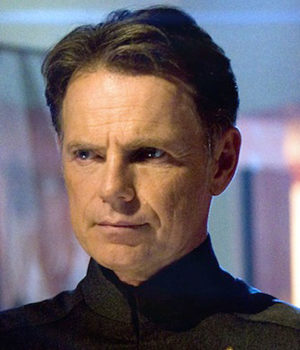 (October 17, 2016 – Los Angeles, CA) Netflix has announced that Carla Gugino (The Space Between Us, San Andreas, Watchmen) and Bruce Greenwood (Star Trek into Darkness, Star Trek) will star as ‘Jessie’ and ‘Gerald’ in Mike Flanagan’s cinematic retelling of the novel Gerald’s Game for Intrepid Pictures.

Based on the book by Stephen King, Gerald’s Game follows Gerald and Jessie Burlingame, who have gone to their summer home on a warm weekday in October for a romantic interlude. After being handcuffed to her bedposts, Jessie tires of her husband’s games, until things take an unexpectedly tragic turn. Still handcuffed, she is trapped and alone. Painful memories from her childhood bedevil her. Her only company is a hungry stray dog and the voices that populate her mind. As night comes, she is unsure whether it is her imagination or if she has another companion: someone watching her from the corner of her dark bedroom.

Director Mike Flanagan, who adapted the script with Jeff Howard (Oculus, I Know What You Did Last Summer) said: “Gerald’s Game has been my dream project for nearly twenty years. As a lifelong fan of Stephen King, it is a true honor to be trusted with this amazing material. I am deeply grateful to my long-time partner, Trevor Macy, and to my new partners at Netflix, for making this dream project a reality. This is one of the reasons I wanted to make movies in the first place.”

Gerald’s Game marks Macy and Flanagan’s fifth collaboration since 2013, following: Oculus and Before I Wake for Relativity; Hush for Netflix; and Ouija: Origin of Evil, which Universal Pictures will release on October 21st. Intrepid Pictures has produced fourteen feature films distributed worldwide by both major and Independent studios including Stacy Title’s The Bye Bye Man which STX Entertainment will release on January 13th.

Kidnap Capital to Premiere at Fantasia