Raymond William Stacy Burr was born in New Westminster, B.C. The son of a trade agent, his family moved often when he was young. The Burrs lived in China for a short time but upon returning to Canada in 1923 his parents divorced. This brought another move for Burr, this time to his grandparents’ place in California with his mother and two siblings. It was hard for the family to make ends meet, so he took on a variety of jobs to help out. He was a ranch hand in Roswell, New Mexico, a deputy sheriff, a photo salesman and, unbelievably, a singer in various nightclubs. Through it all, Burr dreamed of acting. He started in theatre in his late teens but the Second World War interrupted his budding career. He joined the navy in 1943. While stationed in Okinawa, he was shot in the stomach and returned home. His first film San Quentin was released in 1946.

His career took off and he worked steadily, appearing in nine films in 1948 alone. A Place in the Sun (1951) pit him against legends like Elizabeth Taylor, Montgomery Clift and Shelly Winters. Three years later he went on to play the villain in Alfred Hitchcock’s Rear Window, and in 1956 he appeared in the cult film Godzilla: King of the Monsters playing the role of Steve Martin. The very next year he costarred with Barbara Stanwyck in Crime of Passion, which was another big success for Burr.

He never really stopped making films, but his biggest success came from playing lawyer Perry Mason in the television show of the same name. The long-running series lasted from 1957 to 1965. Television being as good to him as it was, he returned in 1967 to star in Ironside. Burr received two Golden Globe 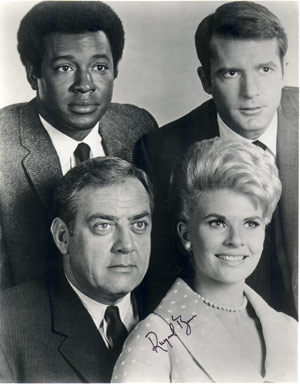 Moving around as a youngster must have left its mark on Burr, since he went on to own Naituba, an island in Fiji, as well as a ranch with a vineyard that produced his own wine in California. When Raymond Burr died of cancer in 1993, his remains were interred at Forest Cemetery in his hometown of New Westminster, British Columbia. The Raymond Burr Performing Arts Centre in New Westminster opened its doors in October 2000 near a city block bearing the Burr family name. Its home was in what had once been the Columbia Theatre, which had originally opened in 1927. The Raymond Burr Performing Arts Society was formed with the intention to renovate and restore the Columbia to its original splendor for use as a regional performing arts centre. While fundraising for restoration and renovation was started and a temporary 242 seat live theatre venue had been created within the lower cinema space, the building that had been listed as a landmark in 2001 was closed and demolished in late 2006.

Raymond Burr has a star on the Hollywood Walk of Fame at 6656 Hollywood Blvd.

All of the images used in this biography were scanned from originals in the Northernstars Collection. This biography is Copyright © 2014 by Ralph Lucas and may not be reproduced without written permission. Click here for more information about copyright.