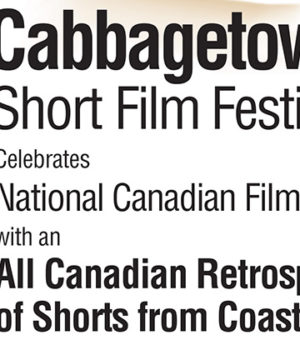 (April 4, 2016, Toronto, ON) To Celebrate National Canadian Film Day, the Cabbagetown Short Film Festival will screen an all Canadian program of 10 shorts, selected from hundreds of titles in the festival archives.

The Festival is a volunteer run, not-for-profit organization that’s been attracting a loyal following since 1992. Two retrospectives had been planned leading up to the 25th Anniversary edition of the festival scheduled for September 7th at the Ada Slaight Theatre in the Daniels Spectrum. The first took place on March 4, and was a screening of international shorts at the Parliament St. Library in the Cabbagetown neighbourhood of Toronto.

On April 20 The Cabbagetown Film Festival will celebrate National Canadian Film Day with a screening at the Parish Hall, in Saint Simon-the-Apostle Church, 525 Bloor St. East. “I was thrilled to be asked by ReelCanada to participate in the April 20 event,” said Gina Dineen, festival founder and programmer. “And then it hit me… what a huge challenge 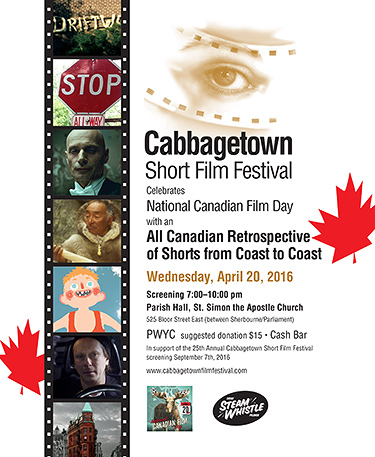 selecting the program would be! It was a truly daunting task but in the end, I decided to put together an eclectic mix that reflects the diversity we treasure in Canada.”

The program includes projects from filmmakers both at the beginning of their careers as independents and others who are seasoned industry pros. They come from Newfoundland, Quebec, Ontario, Manitoba Saskatchewan, British Columbia and Nunavut.
With a little comedy, drama, animation, documentary and experimental, there is something everyone.

All of the shorts were previously screened at Cabbagetown Short Film Festivals between 2003-2013. Including a local favourite, Stopping in Cabbagetown by local filmmaker Ralph Lucas.

The April 20 screening is PWYC, with a suggested donation of $15. Proceeds will support the Sept 7th 25th Silver Anniversary edition of the Cabbagetown Film Festival. There will be a Cash Bar. The Parish Hall is wheelchair accessible.

The Summerland Project at Cannes